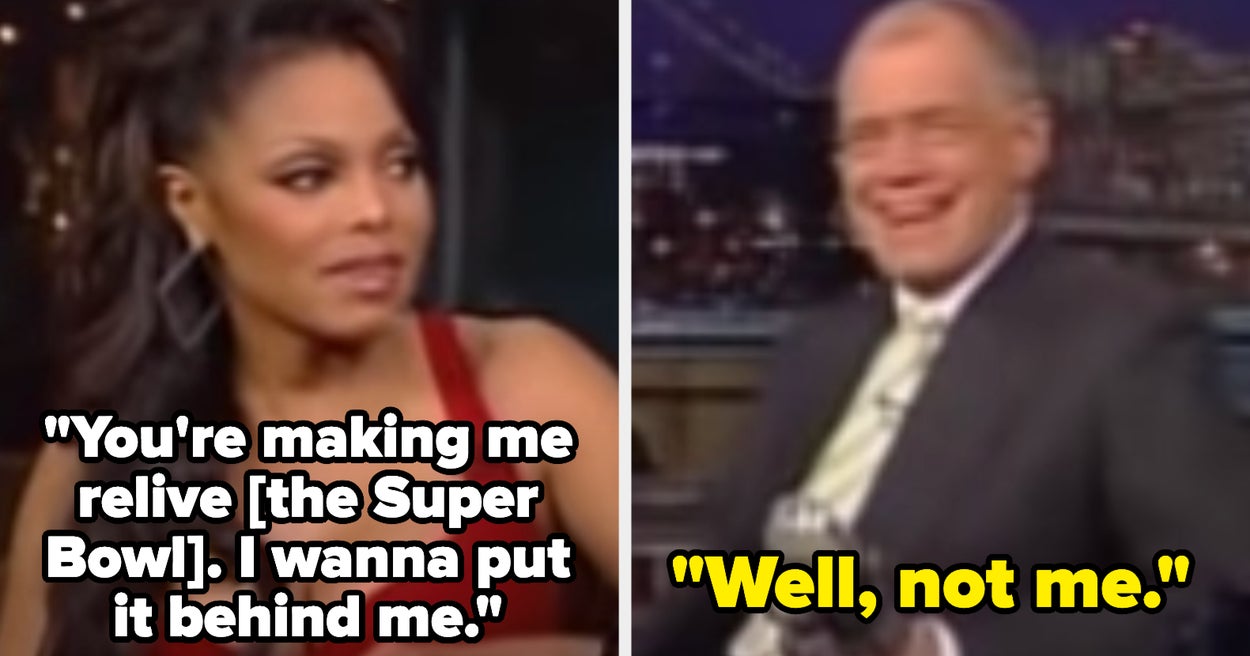 In the beginning of February, FX/Hulu dropped The New York Times Presents: Framing Britney Spears. It sparked an important conversation around the media’s effect on Spears’ career and the toxic behavior men in media have played toward famous women as a whole.

This inspired us to ask the BuzzFeed Community when men in media failed famous women, and it turns out a lot of the submissions were about David Letterman. Here’s what they had to say.

Warning: Some submissions include topics of sexual assault.

When Janet Jackson vocalized she didn’t want to talk about her performance at Super Bowl XXXVIII with Justin Timberlake, but David Letterman ignored her boundaries and asked her anyway.

When David Letterman made an inappropriate joke to Charlize Theron about giving her a boner as an early birthday gift instead of sending her something in the mail.

When he repeatedly asked Madonna to kiss a random stranger in the audience, and every time she said no, he continued to badger her about it.

When Jennifer Lopez visited the show to promote The Wedding Planner in the early ’00s, and David Letterman’s crew zoomed in on Lopez’s breasts (much to Letterman’s amusement).

When Jessica Alba described wearing a revealing outfit while shooting a scene for Honey, and David made her visibly uncomfortable about it.

When he refused to let go of Mariah Carey’s hand when they first met in the mid-’90s, even though she tried pulling away multiple times.

When David Letterman interrupted his interview with Jennifer Aniston in 1998 to put a piece of her hair in his mouth without her consent, and when she told him to stop, he didn’t.

When he mocked the serious issues Oprah tackled on her own TV show in the late ’80s and refused to stand up for her when she was being heckled by one of his audience members.

When he had no respect for Lindsay Lohan’s boundaries about going to a rehabilitation center in 2013, asking horrific questions like: “What are they rehabbing? How will this time be different?”

When Beyoncé visited the show in 2009 and told a story about getting hurt during an acrobatic-like performance. She explained how she didn’t mind getting bruised during her shows, and Letterman made a comment insinuating she enjoyed rough sex.

When he made a demeaning Top 10 List about possible first lines in a Monica Lewinsky biography from the late ’90s, like: “By the time you read this, I’ll be on to my next president.”

When he didn’t stop commenting on Tina Turner’s scent when she visited the show in the mid-’90s, and even made a joke about it to lure people to see her concerts.

When he made famous women like Tyra Banks and Rosie Perez read a ridiculous Top 10 List titled “Beautiful Women Complaints About Men,” and ultimately took another jab at Monica Lewinsky.

When David Letterman greeted Sofia Vergara in the early 2010s, and he kept pulling her in for a hug when she tried to let go multiple times.

And when David Letterman had Britney Spears read a Top 10 List about her being the president of the US, making light of her issues and refusing to take her seriously.