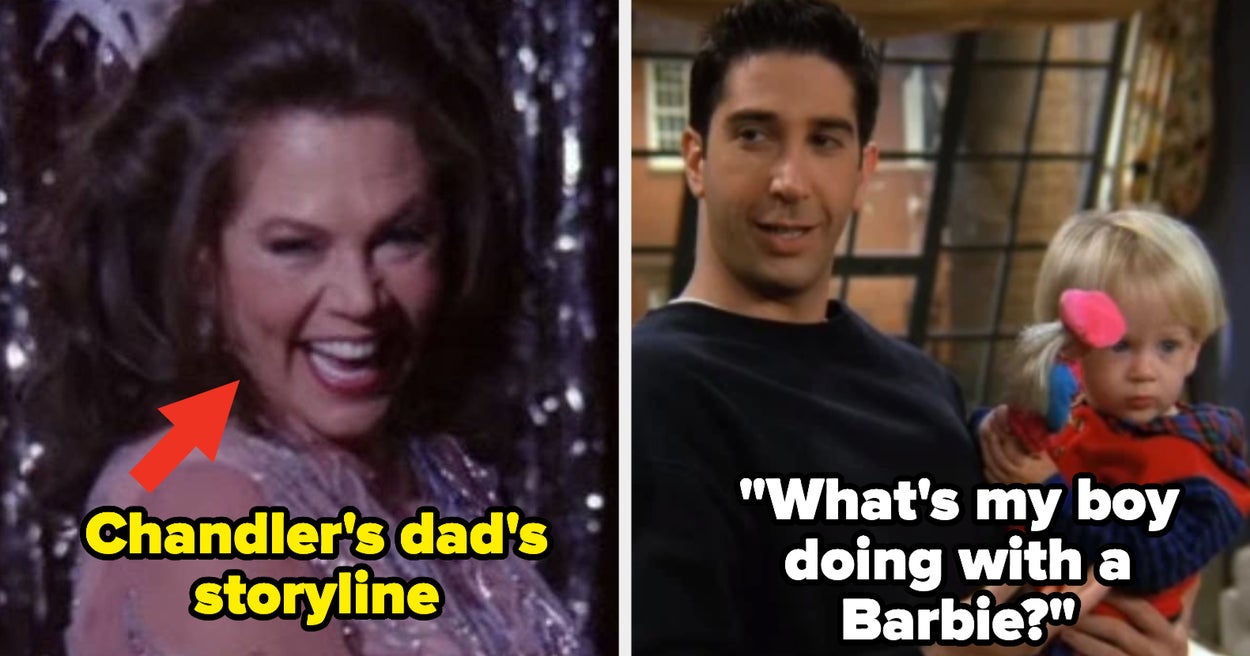 We asked the BuzzFeed Community to tell us when Friends did a bad job of handling serious topics. Here’s what they had to say.

Warning: Some submissions include topics of sexual abuse and suicide.

When they portrayed Phoebe’s homelessness as a teenager in New York City as one of her quirky personality traits instead of a seriously traumatic experience.

When they made Joey’s treatment of women a running joke throughout the series rather than a deeply inappropriate behavior.

When the show wrote anti-fat jokes about Monica’s weight as a high schooler, and capitalized on the idea that “fat people don’t deserve to be treated like everyone else” when Courteney Cox wore a “fat suit.”

When Ross couldn’t accept the idea that a straight man wanted to be a nanny, and fired Sandy from being Emma’s full-time nanny.

When the friends made fun of Chandler’s dad and constantly identified her as a drag queen, rather than accepting her for who she really was: a transgender woman.

When Joey and Ross realized they liked taking naps together and hid it from the rest of the gang because they “feared” they’d be perceived as “queer.”

When the show didn’t treat Phoebe’s mother’s suicide as a serious issue, but rather the butt of a joke that usually got a big laugh from the audience.

When Carol and Susan’s relationship in Season 1 was defined as an evil factor in Ross’s life, rather than a groundbreaking moment in Carol’s personal journey.

When Frank Jr. Jr. got engaged to his high school teacher and the gang accepted their relationship because the writers portrayed it as a “true love story” rather than what it really was: sexual harassment.

When Chandler felt uncomfortable with Joey and Ross wearing makeup and knitting, ultimately making them feel bad for not doing historically “masculine” activities.

When Monica made an anti-gay comment about Joey’s ballroom dance lessons, perpetuating the idea that identifying as gay was something to be made fun of.

When Ross thought he had kissed a drunken and unconscious Rachel in his bed back in college, totally disregarding a woman’s consent and boundaries.

When the show never explored Phoebe’s grief over giving up her brother’s triplets after giving birth to them, especially when she wanted to keep one of them to raise herself.

When Chandler made an insensitive comment at Janice’s expense when she got stood up on a date, making light of self-harm and suicide.

And when Ross pushed Ben to play with a G.I. Joe instead of his Barbie doll, perpetuating toxic masculinity at a young age.