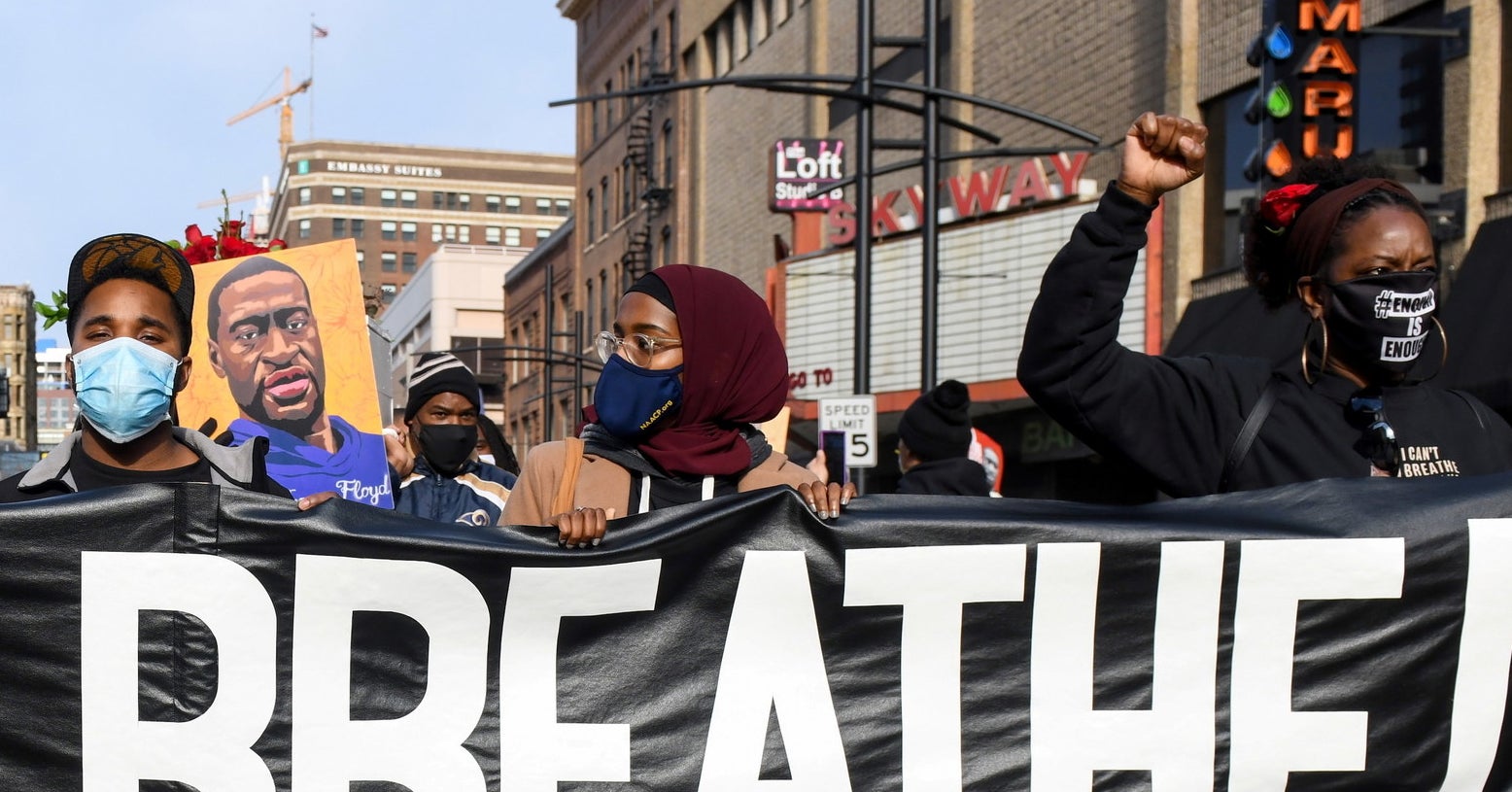 
A day before jury selection in the murder trial of Derek Chauvin, the former cop accused of killing George Floyd, hundreds of protestors took to the streets of Minneapolis calling for justice and police reform.

Hundreds of people marched Sunday from Hennepin County Government Center through downtown Minneapolis, at one point stopping at an intersection to read the names of more than 400 people killed by police in the state of Minnesota. Organizers for the event, “I Can’t Breathe” Silent March for Justice, asked people to wear black and bring flowers and signs.

Civil rights attorney and activist Nekima Levy Armstrong, who read the names of those killed by police, asked a group of volunteers to carry a white coffin a member of the community had made to remind everyone that George Floyd was “lynched” on May 25 of last year.

Armstrong said Black people and other people of color are living in an environment that can be hostile towards them.

Jury selection in the high-profile trial is expected to begin Monday. Chauvin is charged with second-degree murder and manslaughter. Three other officers charged in relation to Floyd’s death are slated to stand trial in August.

Last May, a bystander video of Chauvin pushing down on Floyd’s neck with his knee for about nine minutes sparked weeks of protests against racial injustice in Minneapolis and across the US. In the video Floyd is heard repeatedly saying “I can’t breathe” — much like New York’s Eric Garner, another Black man who died at the hands of police — final words that have become a rallying cry for protestors.

The looming trial has put the city on edge, with Minneapolis officials and authorities preparing for possible civil unrest by barricading, fencing, and putting up razor wire in front of government buildings.

On Friday, just three days before Chauvin’s trial was expected to begin, a state appeals court ordered Hennepin County Judge Peter Cahill to reconsider the addition of a third-degree murder charge. The move could delay Chauvin’s trial, but as of Sunday evening, no decisions had been made.

On CBS’ Face the Nation, Ben Crump, who is one of the lawyers representing Floyd’s family, said it was his understanding that the trial will still start on Monday.

“I know Attorney General Keith Ellison, the first African-American attorney general for the state of Minnesota, is going to prosecute this case zealously,” Crump said. “That’s why they’ve moved for the third-degree murder charges to be instated, because they want to make sure that the jury has every option to hold Derek Chauvin criminally liable for the torture, the inhumanity, and the murder of George Floyd.”

Asked what Floyd’s family’s message was to protestors, Crump said “their message is thank you for standing up and exercising your First Amendment rights, but doing so in a peaceful way.”