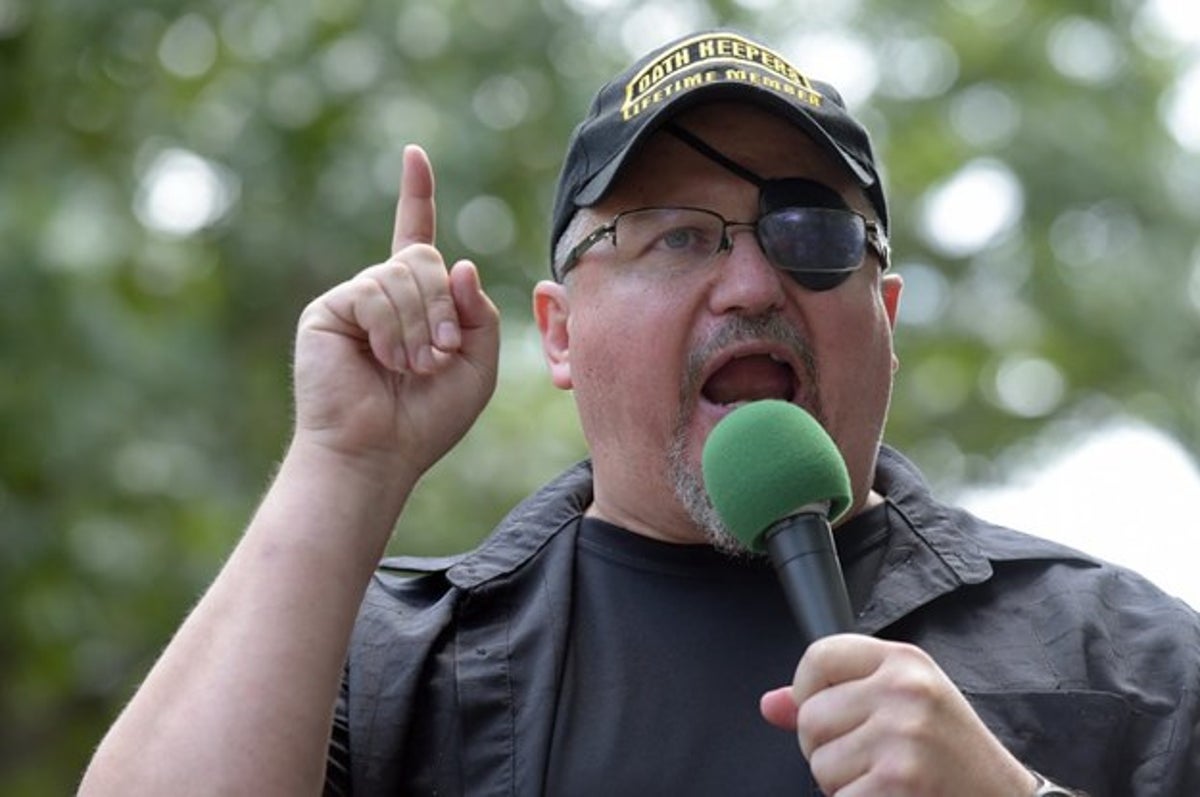 Federal prosecutors late Monday alleged that the leader of the Oath Keepers encouraged followers to come to Washington, DC, on Jan. 6 armed with non-lethal weapons and later stood outside the Capitol during the insurrection directing them toward a potential entry point.

Just after 2 p.m. on Jan. 6, according to prosecutors in a new court filing, Stewart Rhodes sent a message on the encrypted Signal app to several of his followers saying: “Come to the South Side of the Capitol on steps.” At 2:41 p.m., Rhodes, who is referred to in court filings as Person One, posted a photograph of the Capitol with the caption: “South side of US Capitol. Patriots pounding on doors.”

Monday’s filing is the clearest indication federal prosecutors have yet given that they believe Rhodes played a significant role in real-time actions on the ground on Jan. 6. Prosecutors have already charged several Oath Keepers with conspiracy for their actions at the Capitol and have described the Oath Keepers as a “loosely organized collection of militia who believe that the federal government has been co-opted by a shadowy conspiracy that is trying to strip American citizens of their rights.”

Rhodes, who started the group in 2009, did not immediately respond to requests for comment. Interviewed by Alex Jones for Infowars in late January, Rhodes denied playing any role in the storming of the Capitol. He has not been charged.

Although prosecutors referred to Rhodes by name in charging papers filed against Thomas Caldwell and two others arrested in mid-January, they began referring to him as Person One in subsequent filings. In a Jan. 27 filing, prosecutors wrote: “The Oath Keepers are led by Person One.” Prosecutors also quote public statements by Rhodes in their filings and attribute them to Person One.

The details about Rhodes’ Signal messages on the day of the Capitol attack came as the Department of Justice argued for the continued detention of Caldwell, a 67-year-old retired Navy officer from Virginia. Caldwell, who is not a dues paying member of the Oath Keepers, was with them at the Capitol that day and involved in their planning, including booking hotel rooms, according to the filing.

In the messages, prosecutors said, Rhodes communicated with other Oath Keepers leading up to the day’s events, advising them that the group would have “several well equipped QRFs outside DC,” using an acronym for Quick Reaction Force — heavily armed teams prepared to jump into battle.

Prosecutors have previously alleged that Oath Keepers, including Caldwell, had discussed QRFs and had made plans to use trucks or boats to ferry weapons into the District of Columbia on Jan. 6. Late last month, the government told a federal judge it had a “working understanding” that the Oath Keepers had a QRF stationed outside DC that day.

In group messages cited Monday, Rhodes had advised fellow Oath Keepers to avoid bringing items into the city that could get them arrested, such as guns; he suggested they wear eye protection, helmets, and “good hard gloves” and carry heavy flashlights that ostensibly could be used as bludgeons, according to the filing. Rhodes added that he intended to carry a collapsible baton because they “are a grey area in the law,” noting that “I’m willing to take that risk because I love ‘em.”

A grand jury has so far indicted nine people described as Oath Keepers with crimes related to the Jan. 6 insurrection; on Saturday a New York tattoo artist whom Rhodes last year designated a “lifetime Oath Keeper” was also arrested and charged.

Rhodes has repeatedly said in interviews and on social media that he felt the 2020 election was not legitimate and that Donald Trump should not relinquish the presidency. In their filing Monday, prosecutors showed texts sent by Rhodes expressing frustration that not enough was being done to stop the certification of the Electoral College by Congress.

According to prosecutors, at 1:38 p.m. on Jan 6, shortly after then-President Donald Trump finished his speech and rioters began fighting with the police outside the Capitol, Rhodes wrote to the group chat: “All I see Trump doing is complaining. I see no intent by him to do anything. So the patriots are taking it into their own hands. They’ve had enough.”

Just a few hours later, around 4 p.m., as rioters began exiting the Capitol, a large group of Oath Keepers “gathered around” Rhodes on the east side of the building and “stood around waiting for at least ten minutes in that location,” the court filing Monday said.

Caldwell was arrested on Jan. 19 and has been detained ever since. He has argued that he never actually entered the Capitol, that he is too physically disabled to have taken an active role in the riots, that he is not in favor of violence, and that he is not a dues-paying Oath Keeper.

Last month, a federal judge denied his request for bond, saying he “not just a danger to the community but to the fabric of democracy.” Caldwell subsequently switched lawyers and last week asked the court to reconsider his release, claiming that the charges against him were “riddled with inaccuracies.”

The Monday filing by prosecutors responded to those arguments, citing messages sent by Caldwell as evidence that he “plays a leadership role within the Oath Keepers” and was deeply involved in planning and preparation for Jan. 6. The filing also describes him bragging to friends about his role in storming the Capitol.

“I grabbed up my American flag and said let’s take the damn capitol,” reads one text message sent by Caldwell quoted by the Justice Department. “So people started surging forward and climbing the scaffolding outside so I said lets storm the place and hang the traitors.”

Caldwell subsequently sent another text message, prosecutors said: “If we’d had guns I guarantee we would have killed 100 politicians. They ran off and were spirited away through their underground tunnels like the rats they were.”