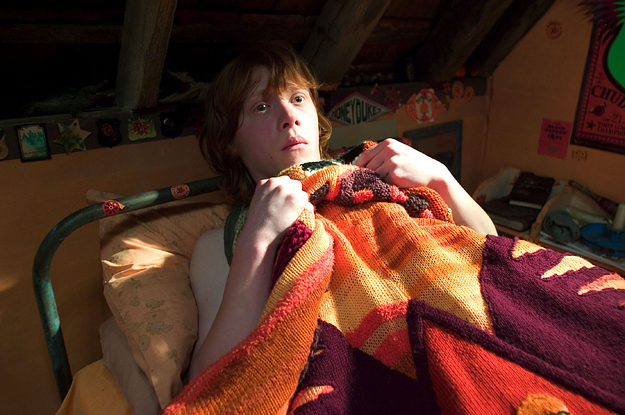 Let’s face it: You know Rupert Grint from the Harry Potter movies. And that’s okay!

After all, he was in, like, eight of them — a fact that is certainly not lost on him, as he recently disclosed on an episode of Dax Shepherd’s Armchair Expert podcast.

“There was a time where it felt quite suffocating,” Grint admitted about the decade-long process of making all eight Harry Potter films, “because it was heavy going, because it was every day for 10 years in the end.”

He admitted, “It was a great experience. Such a nice kind of family atmosphere. It was always the same crew we kind of grew up with, so it was a great place to be”… But he also said, “It definitely felt like, ‘I want to do something else. See what else is out there.'”

“It just never ended,” he added. “Every year, we came back. And it was kind of like Groundhog Day because it was the same sets. It was the same people. But it was great. I loved it.”

Grint also claimed that, to date, he’s only seen one of the Harry Potter films — Sorcerer’s Stone, specifically — more than once: “It still feels too soon really. I can’t detach myself fully. I can’t face it,” he said about revisiting the movies.

Okay, so Grint liked making the movies, but eventually it got to be exhausting — and, he still can’t really watch them yet. Anything else?

Well, actually, yes. “My hair in film four is one of my biggest regrets,” Grint admitted about his ‘do in Goblet of Fire. “I think everyone actually had a phase of having this really long hair. They liked it—it was kind of wizard-y. We went through our puberty on camera.”

Well, listen, there’s other stuff you can watch Grint in too — like the second season of Servant, which is currently on Apple TV+. A friend recommended it to me recently! I’ll probably start watching it soon too.