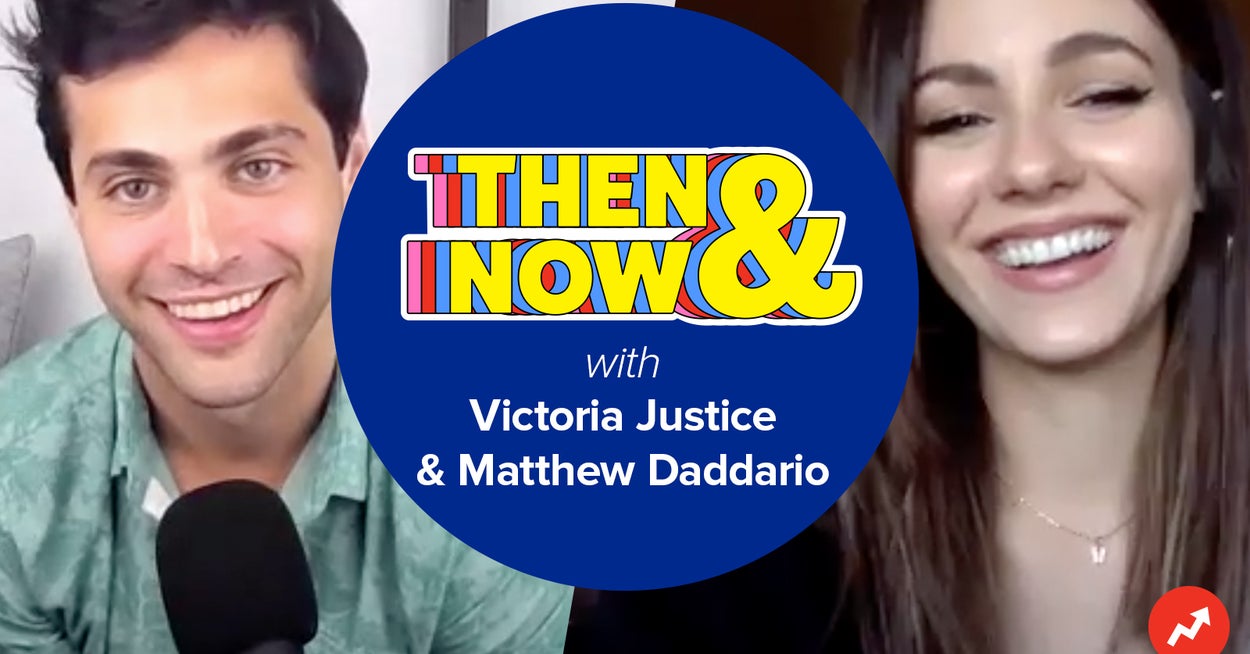 
Earlier this month, Victoria Justice and Matthew Daddario hopped on a Zoom call with BuzzFeed to discuss their current project together, Trust, as well as their past project together, Naomi and Ely’s No Kiss List. As a longtime fangirl of both of these humans, it truly was an iconic moment™ watching these two reminisce and share their favorite memz from their joint projects. Here’s everything we learned:

THEN — What was your favorite scene to film together on the set of Naomi and Ely’s No Kiss List?

Matthew Daddario: OK, so there are the scenes that you like filming and the scenes that just turn out well — like there was a scene we filmed in Central Park that [looked great] but it was freezing that day. [Writer’s note, Victoria Justice made a joke about that scene being a “walk in the park” and it was too punny not to share.] You know what scene I liked? The scene we filmed in the lobby when I’m sitting on the couch and Naomi (played by Victoria Justice) comes in drunk and it was so funny. There’s this humor that bounces back and forth, but it’s also a pivotal moment in the movie.

Victoria Justice: You’re totally jogging my memory — I loved filming that scene too, especially because we got to improvise a little bit which was fun and ~loosey goosey~. Also, the scene when we’re in the janitor’s closet and you’re sining your song: Naomi is so fine, Just like summer wine, Naooomiii. That was so cute.

NOW — What was your favorite scene to film together on the set of Trust?

MD: My favorite scene was the one when we’re all at the gallery opening and Amy (played by Katherine McNamara) shows up and we’re all standing in a circle and Vic’s character is like, “Do you know her?” and my character is all like, “No, no I don’t.” [Writers note: be sure to watch Trust to find out if his character DID actually know her or not.] That was a good, farcical scene.

VJ: I’m going to have to agree, that was my favorite scene, too. OH! I also liked filming the scene in the Indian restaurant — it’s so small and cramped, but so beautiful with all the lights — it looked so good on camera. [Writer’s note: For east coast folks, the restaurant they filmed at was Panna II in the East Village.]

THEN — What was your favorite on-set OR behind-the-scenes memory from Naomi and Ely’s No Kiss List?

MD: I got to play basketball for a scene and where we were filming was a block away from my apartment [at the time.] I remember putting on my shoes and saying, “I’m going to work,” and I went to work and played basketball. It was like a fake day, ’cause I would normally do that on a non-work day.

MD: You mean to tell me there was a day that y’all did pickle-back shots and I wasn’t there???

NOW — What was your favorite on-set OR behind-the-scenes memory from Trust?

MD: When I first walked into the art gallery — I took the train Downtown, I didn’t take a car ’cause that’s ridiculous — and there are just giant nudes. Everywhere. My first thought was, “How do you arrange all this? Who do you call? ‘Hey, we’re making a movie and we need a bunch of nude portraits and we need some of them to look like certain people.'”

VJ: Well, I’m method, so I posed for my painting, of course. [Laughs] [Writer’s note: Victoria was being glib. She did not pose for a nude portrait.] Though I did have to take a bunch of photos in a tube top so that they could get my clavicle juuuuust right.

BuzzFeed: Matt, going into filming that opening scene in the gallery, did you know all the paintings were going to be of nude women?

MD: Not at all — I didn’t think about it! I just walked in and it was like, “BAM!” And I was like, “Oh, alright.” That was an amusing thing to just wander into.

VJ: One of my favorite memories — which doesn’t involve Matt, even though we shared a LOT of good times — was my sister making a cameo in the film! It was really fun to have her on set. She was so nervous, but I talked her through it, and I just loved having her around.

THEN — What was your favorite NYC location to film at on Naomi and Ely’s No Kiss List?

MD: I have an affinity for Central Park — it’s my neighborhood! So all of those scenes.

VJ: Pierson [Fodé] (who played Ely) and I got to film at Yaffa Cafe, an East Village staple, before it closed. ALSO, all the scenes we got to film at Magnolia Bakery. So many iconic establishments.

NOW — What was your favorite NYC location to film at on Trust?

MD: There’s a pivotal scene in the film where something is revealed — no spoilers — but we’re in the middle of the street in Midtown and it was really cool to do. It’s stressful, because you’re performing and people are watching it and filming it, but it added to the tension of the scene.

VJ: That was probably my favorite, too! We filmed during Christmas time, so it was great to get on camera. But I remember while we were filming, a little crowd gathered and when we finished the scene, they would clap! But that’s filming Guerrilla style in New York. Also, of course filming at Panna II.

THEN — Who was your favorite character from Naomi and Ely’s No Kiss List?

MD: My favorite character, in terms of who I liked the most, was Gabriel. [Writer’s note: in case you didn’t know, Gabriel is the character that Matthew plays in the film.] He’s no trouble, he goes to work, he doesn’t cause problems, but there’s this lady in the building who’s got a lot going on…[Writer’s note: He’s referring to Victoria’s character]

NOW — Who was your favorite character from Trust?

MD: I loved Adam and Kim (played by Ronny Chieng and Lindsey Broad). They drive some of the actions, they’re humorous — I know those people, you know? We all have those friends and I liked that.

VJ: I loved Ansgar (played by Lucien Leon Laviscount). His cool accent and his whole vibe — it was really great to play off of.

THEN — What was your first reaction when you found out you’d been cast alongside each other in Naomi and Ely’s No Kiss List?

MD: I’m gonna be honest, Vic, I don’t 100% recall [Laughs.] I just remember you were very nice and down to Earth and I remember feeling relieved.

VJ: I remember thinking Matt was perfect for the role. I really dug his vibe and he was this [puts on New York accent] super cool, down-to-Earth, New York dude, through and through.

NOW — What was your first reaction when you found out you’d been cast alongside each other in Trust?

MD: Now, with Trust, I remember my agents calling me and telling me that Vic was actually the one who recommended me for this film — big thanks to Vic — and I called her and asked, “Are we doing this?” and we did. I was genuinely thrilled about it.

VJ: Yeah, when I decided to do this, our director asked if I had any names / ideas of who to cast, and I was thinking, “You know what! This fellow, Matthew Daddario, who I worked with years ago, would be perfect for this role.” It’s always great when you can work with people you know you enjoy working with.

Thanks for chatting with us, Victoria and Matthew! Be sure to catch this iconic duo in Trust, available in theaters and OnDemand. And, if you want more of them and are feeling nostalgic, then feel free to follow that film with Naomi and Ely’s No Kiss List.