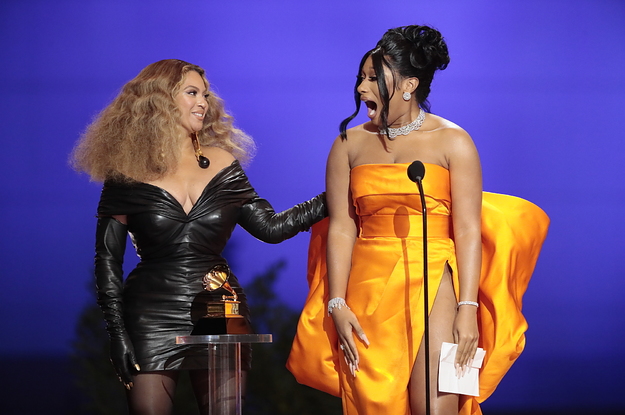 ATTENTION: Beyoncé is in attendance at the Grammys and is making major history.

And not only that, but she looks absolutely incredible while doing so:

Moments after fans spotted Bey and Jay Z sitting front row at the ceremony, she accompanied Megan Thee Stallion on stage to pick up the award for Best Rap Song with their “Savage” collaboration.

During their acceptance speech, the duo couldn’t help but gush over each other!

“I definitely want to say thank you to Beyoncé. If you know me, you have to know that ever since I was little I was like you know what, one day I’m going to grow up and I am going to be like the rap Beyoncé,” Meg said on stage.

Beyoncé added, “I just want to quickly give my love to Megan, who I have so much respect for and I’m honored that you asked me to be a part of the song.”

Best Rap Song wasn’t the first award the duo won together tonight. They also picked up the award for Best Rap Performance for “Savage.”

On top of that, the award for Best Rap Song marked a record-breaking accomplishment for Beyoncé as she tied for the most awarded female artist in Grammy history.

But the shock was nothing compared to just a few minutes later when she took home the award for Best R&B Performance and officially made history as the artist with the most Grammys wins EVER.