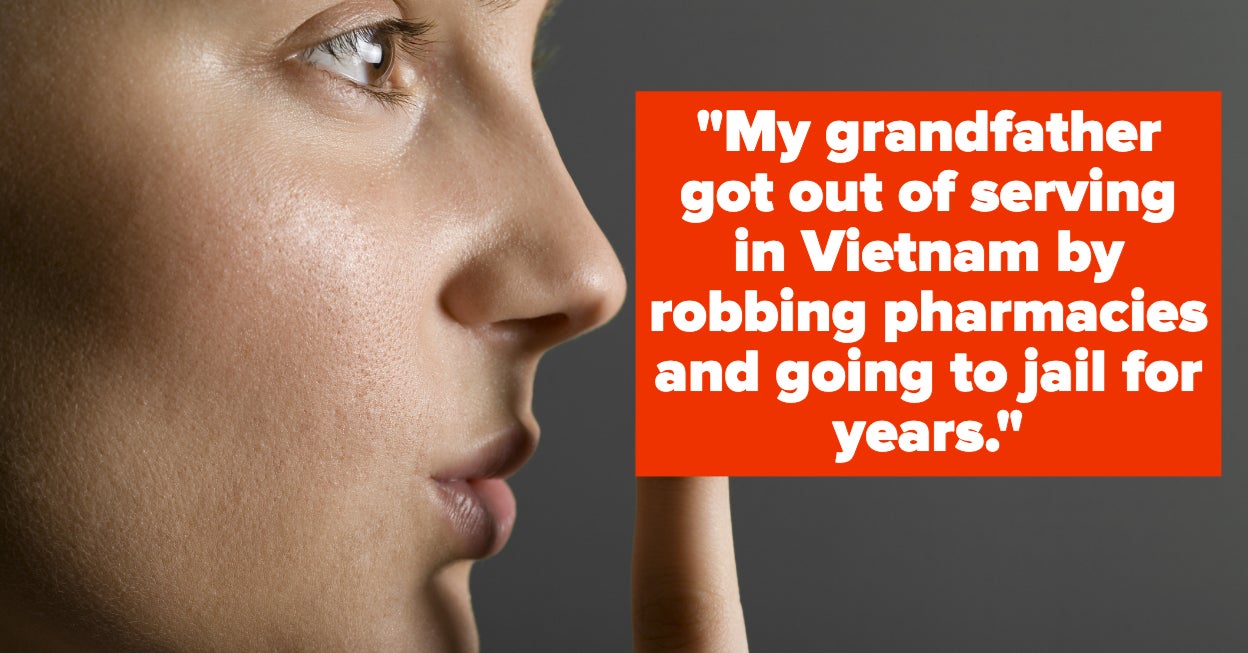 Earlier this week, Reddit user u/Flash_Dimension posed this question to the users of the site: “Once you were old enough, what were the dark family secrets you were finally let in on?”

I don’t know what I was expecting, but it wasn’t this. Here are some of the most intense response:

“I got a Facebook message from one guy asking if I was related to my dad, since it’s not a common last name. I thought he was a fan of his work, because I was in college at the time and the guy was about the same age as me — that’s how I found out my dad slept around and that I had a half brother the same age as me.”

“My grandfather killed his youngest brother to get out of going to Vietnam.”

“[The plan was] they would drive to get their medical checks together, and on the way there they would drive the car into a tree. The plan was to get too injured to get sent to war, but not so injured as to be permanently crippled, and it had to look like an accident so nobody got arrested. This was in Western Australia, so they were all going to say they swerved to miss a kangaroo, and hit the tree. … The problem was that for maximum impact, and because this was rural Australia in the ’60s, they weren’t wearing seatbelts. And nobody found them or their car for an hour or so. And nobody considered internal injuries in this plan. My grandfather’s brother bled to death from a ruptured spleen in the back seat. He was dead before they got to a hospital.”

“My mom would sometimes have us play a game called ‘Army,’ which consisted of me, my mom, and my siblings Army-crawling around our apartment. Kind of [like] hide-and-seek. She would yell ‘hit the deck!’ randomly and we would all drop and find a hiding spot. We would giggle and giggle while my mom Army-crawled around looking for us. We loved the game so much.

I realized a few years ago while retelling the story that we lived in a really terrible neighborhood, and she would yell it out when she heard gunshots outside the building. I’m assuming she was worried about stray bullets.”

“My grandfather got out of serving in Vietnam by robbing pharmacies and going to jail for years.”

“When I was about 10, my cousin and his dad died. I always thought it was an accident and on the same day. When I was old enough, I was told that his dad actually committed suicide and my cousin followed him a couple of months later. Truly devastated me, although I didn’t know them well.”

“[My] cousin [is] actually my half brother. My mom got pregnant in college and my aunt and uncle adopted him.”

“My uncle is believed to have murdered two Australian police officers in the late ’80s.”

“The reason why my nanna lives with my aunt is because my aunt and her husband convinced nanna to put [her] house in their name so they could ‘look after her affairs’ and sold it out from under her and invested the money in a pyramid scheme (so it’s gone now). Because of this, my aunt’s siblings refuse to give [her] a penny towards looking after nanna since it’s her fault nanna has no money or assets and instead pay to take nanna out all the time, meals, shopping, activities so she doesn’t go without, but they let my aunt struggle under the weight of nanna’s general living expenses.”

“My grandmother tried to murder my grandfather when she got sick of him beating the shit out of her every day. She swung an axe at him and he blocked it with his hand and lost his thumb. She left him before I was born.”

“My grandma retired and she still decided to work for her brother in his restaurant to save up money for when she dies. Funerals are, obviously, expensive. She insisted he would hold on to her paychecks and pay for her funeral when she dies. He never did.”

“The reason I had a ‘live-in baby sitter’ that moved in at 2 a.m. when I was 5 years old was because my mom’s cousin killed two kids and we ended up harboring his daughter during the trial. He’s the only person on death row in my county.”

“My grandmother’s first husband was extremely abusive, but this was the ’60s and he hid it well. She couldn’t file for divorce without proof of injury, so she beat herself in the face with a slipper to get away.”

“My uncle was raped as a young boy and my grandparents not only didn’t believe him, but beat him and disowned him for ‘bringing such lies into our house.'”

“My grandparents spent some time in lockup after my grandpa killed their newborn in a shell-shock-induced frenzy. They were jailed because they buried her body in a cave and tried to hide it.”

“My dad’s sister had a secret daughter that would have been approximately his age. She was 16 years older than him, and the family didn’t tell him until he was in college. In their small town, there’s a chance he could have/did date his niece.”

“My grandpa molested all the women in our family, not just me, and they let it happen because ‘that’s just what you do.'”

“My parents led me to believe that my grandfather (on my mother’s side) had died due to a heart attack. A year later, they revealed he actually shot himself in the head.”

“To put it shortly — my family tree is more like a very long branch. Yes, we have the genetic defects to prove it.”

“My dad’s uncle died in a boating accident with his cousins.

My family let me know he was possibly drowned in the middle of the lake by his cousins because of some money issues.

No one was ever prosecuted though and the family is still very close. Weird.”

“My dad is in a cult. Wasn’t much of a secret, but as a kid you just kinda assume everything your parents do is the norm.”

“My father got my mother pregnant when he was her teacher in high school. He was 30 and married. She was 15 and his student. They ran off together, he got a divorce, and they got married in a state that allowed marriage at 16, two months before my older brother was born.”

On a positive note: “My cousins lived with us for a while and we thought that was fun because it’s like a sleepover every day. One time, our mom even took us out of school to pick them up.

I learned later that it was because child protective services took my cousins away from their mom because of mental health issues. My mom offered to take her sister’s kids until she got her mental health back in order.

My cousins live with their mom now and their mom is in a much better condition mentally.”

And, to end with a palate cleanser: “Grandma’s top-secret pie crust was actually just Marie Callender’s from the grocery store, set in a fancier dish. She messed with her daughters-in-law for years over it.”

You can read the full thread here.