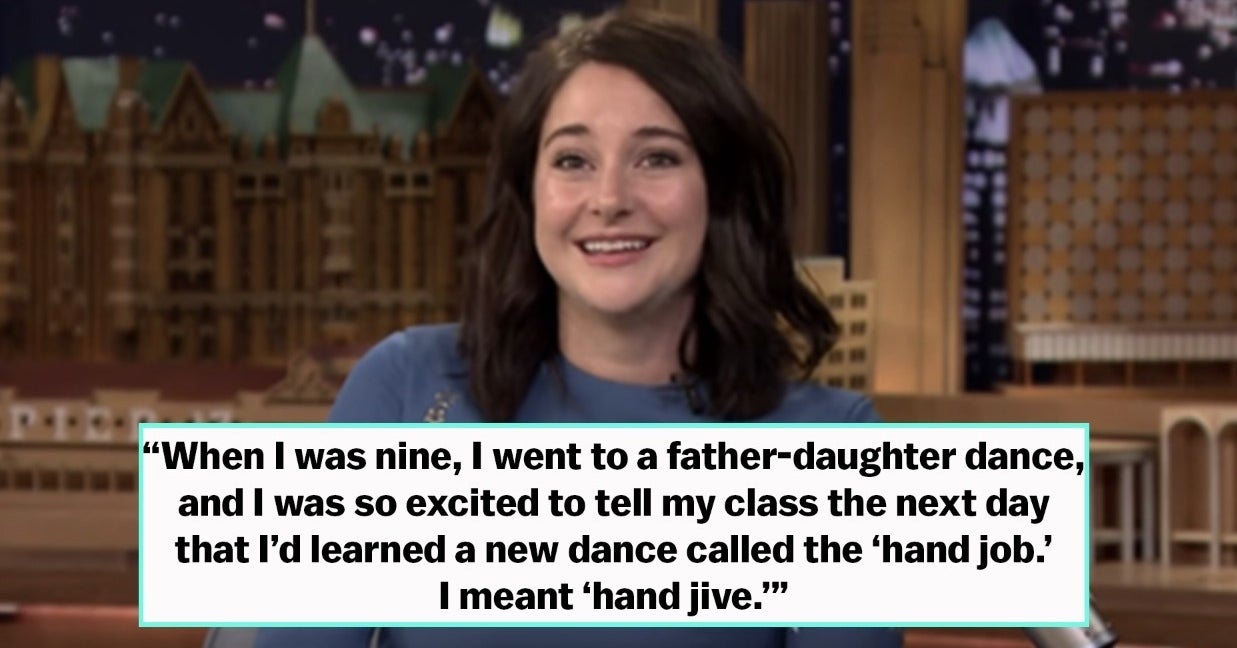 We recently shared a Reddit thread in which people shared the awkward misunderstandings they had as kids, and they were awkward and hilarious as hell:

Well, BuzzFeed readers shared their own hilariously awkward misunderstandings in the comments section, and I laughed so unbelievably hard:

“When I was in fourth grade, I went to a father-daughter dance with my Girl Scout troop, and I couldn’t wait to tell my class the next day that I learned a new dance called the ‘hand job.’ I meant, ‘hand jive.'”

“When I was 7, I somehow thought that if someone touched your stomach, you’d get pregnant. I was terrified and on guard for months! So, imagine my horror when I woke up from a nap one day to find my cat Penelope asleep on my stomach. To me, she was a ‘someone,’ and I cried to my mom that I was afraid the cat got me pregnant!”

“I used to be a boy soprano in a church choir, and I was changing out of my choir robe after church one Sunday when the vicar asked, ‘New jumper, Andrew?’ ‘Yes,’ I said, as I tried to think of something interesting to say about it, ‘It’s ribbed for your pleasure.'”

“I’d heard the line in a film I wasn’t supposed to be watching, and I had no idea what it meant.”

“When I was about 6 years old, I thought that being divorced and being widowed were the same thing — and I referred to my mom as a widow, leading to a lot of people being surprised that my dad wasn’t dead.”

“When I was about 6 years old, I received a blank diary for Christmas. Being little and having a slight speech impediment, I would sometimes call it a ‘diarrhea.’ Well, one evening, one of my brother’s tutors was over, and I went up to her and asked, ‘Hey! Do you wanna come see my diarrhea?'”

“She was relieved when I showed her a blank notebook.”

“When I was about 10, I watched the movie Mermaids, and someone in that movie mentioned oral sex. I asked my mom what that meant, and she told me it was French kissing. Well, a few days later, my mom asked my sister if she and her boyfriend had been kissing on the front porch. My sister lied and said, ‘No,’ to which I replied, ‘Whatever — you and your boyfriend have oral sex on the front porch all the time!‘”

“I had heard the expression ‘dance on your grave,’ and I believed it was a mark of respect to the deceased. So when my primary school teacher died unexpectedly and the headmaster asked my class to write a note of condolence to her family, I confidently wrote that I would dance on her grave.”

“Needless to say, her grieving colleagues were appalled, and the headmaster matched me from the classroom to his office and called my mother to come pick me up.”

“When I was about 10, I found a small plastic hook in the store which had broken off a hanger, and I walked around with my mom yelling, ‘I’m a number one hooker!'”

“When I was a kid, I wanted to understand life from different perspectives, so — as a guy — I thought it would be useful to understand how pads worked. I lived with all women, so one day, I took one of their clean pads and stuck it on myself, not realizing it was meant to stick on your underwear. Some very unpleasant peeling followed.”

“When I was around 8, I asked my friend if she was a Democrat or a Republican. She said she was Catholic.”

“My siblings and I were at an arcade, and the claw machine ate my quarters without letting me play — so I ran up to the counter and very adamantly exclaimed, ‘That machine jacked me off!’ Everyone got a laugh out of it, but I was confused for many years.”

“I thought Monica Lewinsky was the Vice President for longer than I care to admit.”

“When I was 6 years old, I saw a family on television who were wearing turbans, and I asked my mom why they wore them. She said it was because they are Sikh, but I thought she meant ‘sick’ — and for the next five years, I thought turbans were magical medical wonders that somehow cured illness. I wondered why more people didn’t wear them!”

“It wasn’t until I asked a Sikh person what illness they needed it for that I was dreadfully proven wrong.”

“When my kid was about 7, he was pouring syrup on his pancakes, and I complimented how well he was doing. He looked and me and said, ‘Well, I sure hope so, ’cause I’m a master at pour-nography!’ His teen brother, sister, and I could barely contain ourselves!”

“I was at the beach once with my dad, and I was building a sandcastle. Well, while looking for things in the sand to adorn it with, I found a very cool plastic cylindrical piece of trash, so I used it. A few minutes later, my father came over, horrified that I had put a discarded tampon applicator right on top of my castle!”

“When I was in fifth grade, our teacher asked the class if we knew what the word ‘idolatry’ meant. I proudly raised my hand and explained to the entire class, ‘It’s when your dad kisses a woman that’s not your mom.’ My teacher kindly explained that idolatry and adultery are two different things. I never raised my hand so confidently again.”

“I thought the word ‘fetish’ was just something you really like. Well, once I told my parents I had a tomato fetish, and they were like, ‘Uhh, no you don’t.'”

“I told my dad to stop eating his sandwich one day, and he asked why. I told him because it was called a ‘girl cheese,’ and therefore, it was only for girls.”

“When I was a kid, I thought that song from Grease went, ‘Better taaaaake my erection, feel your way!‘ So, of course I sang it loudly, and no one corrected me.”

“My grandpa lived with us when we were younger, and he always had hard tack candy. But we didn’t hear it clearly, and once ran into the kitchen to announce to our mom that our grandpa had a heart attack! Never really lived that one down.”

“When I was little, we got a new kitten, and I desperately wanted to name her Pussy, like ‘pussycat.’ My mom and sister refused my idea, and I threw the biggest crying fit ever!”