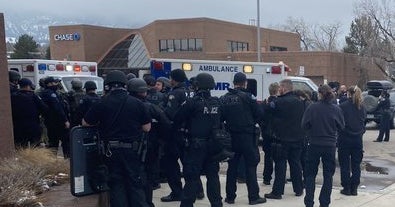 
BOULDER, Colorado — Police are responding to an active shooter at a King Soopers grocery store Monday afternoon, warning residents to stay away from the area as heavily armed officers surrounded the store.

A Boulder police officer was killed in the shooting, two officers told BuzzFeed News. As of Monday evening, authorities had not officially released any information on any deaths or injuries.

Livestreams at the scene showed police in tactical gear attempting to enter the store, the windows of which were broken. In one livestream, a person was seen being led out in handcuffs.

A nearby resident told BuzzFeed News they had heard a series of shots in one rapid-fire burst. Later, police could be heard ordering the suspect to surrender.

After surrounding the supermarket building, police broadcast a message on a loudspeaker: “This is the Boulder Police Department. The entire building is surrounded. I need you to surrender now.”

“I was just at the Whole Foods right near there and was leaving and people were running from the scene,” Alicia Miller, a woman who was in the area, told BuzzFeed News. “I talked to people who said they’d been inside the store and had rushed back in and tried to help people.”

Neven and Quin Sloan were shopping when they first heard a loud bang that seemed to come from outside the store. The bangs began to sound closer, coming from inside the store, Neven Sloan told BuzzFeed News.

“I sprinted over to her and just shoved her out the door, and was like, ‘Hey, we’ve got to go’,” he said.

A livestream from ZFG Videography, a YouTube channel dedicated to covering the city of Boulder run by citizen journalist Dean Schiller, appeared to broadcast footage from the supermarket as the attack unfolded. In the video, two people can be seen lying in the parking lot as an empty Toyota SUV sits on a ramp.

“We’ve got injured parties on the ground,” the livestreamer says in the video. “We don’t know if there’s an active shooter somewhere.”

The video then showed another man gesturing that someone is still in the store and a third person lying next to a checkout area. “Oh my god, we’ve got people down inside King Soopers,” says the man filming the video.

Two gunshots can then be heard from inside the supermarket. “Goddamnit,” he says. “I’m fucking getting away, guys.”

“There’s a shooter! Active shooter!” he yells to people in the parking lot who have come to check on the injured. “Get away! Get back.”

As police enter the supermarket, people can be heard telling officers, “Back of the store is where I last saw him!”

An hour after their initial warning for residents to stay away, police again told people to avoid the scene, which remained active.

Around 5 p.m. local time, multiple officers were also seen running from the grocery store and driving to another location.

Boulder police then asked people near the residential area of 17th and Grove streets, about 3 miles from the King Soopers store, to shelter in place because of a report of an “armed, dangerous individual.” Police said they were looking into whether it was connected to the shooting.

Colorado Gov. Jared Polis said he was following the events as they unfolded.

“My heart is breaking as we watch this unspeakable event unfold in our Boulder community,” he said. “We are making every public safety resource available to assist the Boulder County Sheriff’s Department as they work to secure the store.”