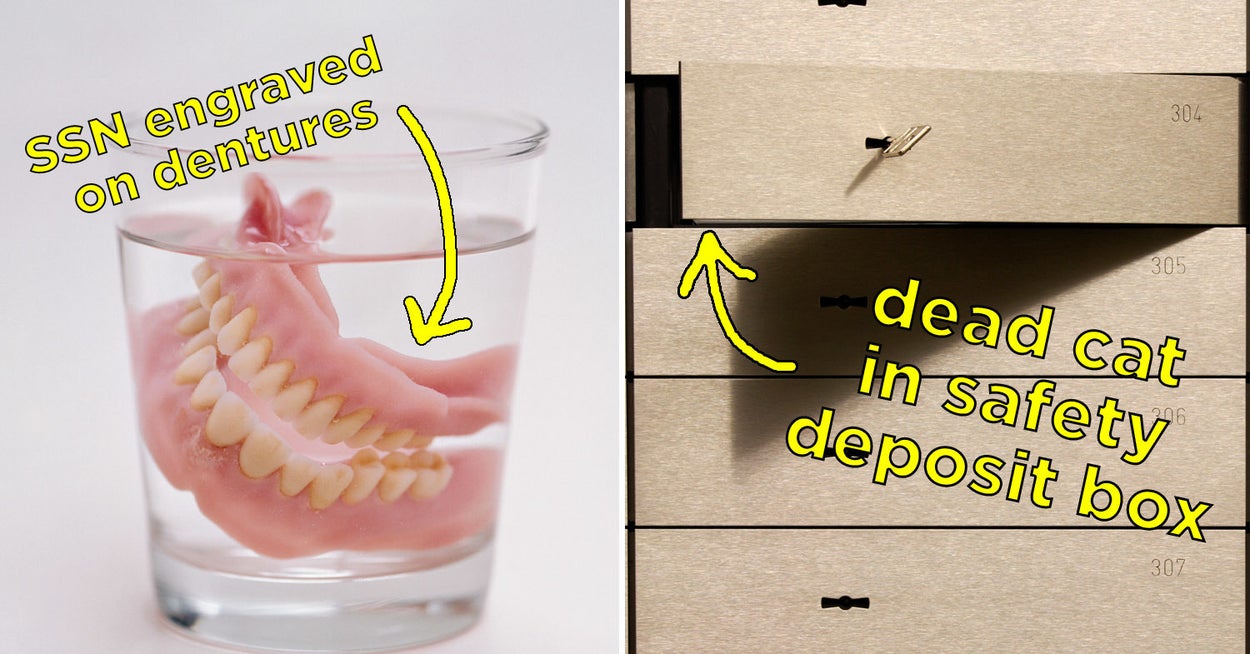 Recently, we asked the bank employees of the BuzzFeed Community to tell us some of their secrets and stories from on the job. Here are some of the weirdest, wildest, and most honest-to-god shocking submissions we received…….

“My friend who worked as a bank admin told me that he would occasionally have a bad day and accidentally ‘kill’ people. Like when he’d get a work order to permanently close an account due to death, sometimes a father and a son would have exactly the same name. The majority of the time, it was the father who had died, but on sad occasions, sometimes it was the son. Unfortunately, he wasn’t given any information as to which one it was, so he would sometimes close the wrong account, effectively declaring a living person (often a grieving father) dead in the eyes of the bank. Apparently it takes a lot of time and paperwork to rectify the error.”

“As tellers, we can always tell when we take in stripper money because it smells like tanning oil, and when we run it through the cash counter, it ‘rains glitter.’“

Don’t Judge a Client by Their Cover

“This man who I had assumed was homeless used to come into my bank every day (in the same clothes) and ask to use a banker’s office to send some emails — most days, he didn’t even have a laptop. After several months, he finally came to my teller window. This man had over $2 million in his account. Never judge a book by its cover.”

“An older woman used to come in about once a week and ask to go into the vault where the safe-deposit boxes were located. These rooms are private and only one person is allowed in at a time. She would stay for about 15 or 20 minutes and always came out crying. One day, she came in very upset because she had lost her box key. The standard procedure was to contact a locksmith to drill the lock. The locksmith came out, and the branch manager went into the vault to open her box. My manager came out looking like he was about to puke. My manager took the lady into his office, and the next thing we knew, animal control was showing up. Turned out that this lady’s cat had died a few months back and she was keeping its body in her safe-deposit box. She’d been visiting and talking to it once a week.“

“One day, I had a woman try to cash a check that was soaked in blood.”

“One day, just down the road — literally within sight of the drive-thru window — a man was struck and killed on his motorcycle. His wife came on her lunch break about an hour later and tried to empty his bank account, and chewed us out when she didn’t have access to it. No tears, no sadness — she just wanted to get the cash before his children from a previous marriage could lay claim.”

“I once had a very distraught woman come into the bank and exchange a charred bill that had a weird smell. Since the serial numbers were still visible, I could exchange them. I started chatting with her, and she suddenly shared with me that the money she had just handed over was in the possession of her son when he died in a fiery car crash. It took everything in me to keep my composure at that moment.”

“I work in credit card banking and had one elderly customer call with her ‘friend’ to help her schedule a payment to her account of $20,000 that had to be posted immediately. The customer then made a $20,000 purchase to the Church of Scientology. Immediately, somebody else working that night got another phone call saying to cancel the $20,000 payment to the account. This ‘friend’ helping my customer apparently worked for the Church of Scientology and faked a payment so that the customer could run their account up 20-grand over the limit. It was absolutely disgusting, but we couldn’t do anything because the customer was insisting.”

Urinate While You Wait

“You would be shocked at how often people urinate in the lobby. They do it in the waiting lobby chairs, right on the carpet in front of everyone…ANYWHERE. The grossest thing is that we have such a dark carpet that more often than not, we can’t find the spot they’ve peed on, so we just shrug it off and never clean it up.“

“People always come in and deposit wet, sweaty money. I’ve had men pull cash out of boots and women pull it out of their bras. I always excuse myself so I can go wash my hands after.”

“When the pandemic started, I got into multiple arguments with customers coming through our drive-thru window because they had their checks and debit cards IN. THEIR. MOUTHS.“

“There had been a string of bank robberies happening in the area, and one morning, we were having a meeting behind our teller line about how we should proceed if someone were to come in and try to rob us. I kid you not, a minute later, this guy walks in wearing a hoodie, jacket, and sweatpants in the middle of the summer. When my manager walked up to inquire more about what he was wanting, he left. Luckily, nobody was hurt, but we had to call the cops because the man fit the description. Sure enough, when they showed up to show us pictures of the camera footage from the other banks, it was the same guy. He went and robbed another bank after he left ours.”

“Lots of weird things happen at banks. People feel comfortable telling you extremely personal things that have nothing to do with their transactions. Multiple couples going through divorces have had screaming matches in our branch, and we often get money that wreaks of marijuana, or bills that have literally been dug out of someone’s backyard and covered in dirt.”

“A woman demanded to know why we had placed a lien on her property, since she hadn’t taken out a loan with us. Turns out her husband did, and he used the money to post bail for his girlfriend.“

“I was working as a teller, and all of a sudden, there was a loud boom. For a split second, we all took cover because we thought there was a gunman on the premises. Turned out it was just a customer not paying attention to where he was walking, and walked smack into the glass partition and shattered it to pieces. There was blood everywhere and the ambulance was called.”

“It would be incredibly easy for those of us with access to your internet banking details to clone you and commit identity fraud in your name. There’s nothing much that can be done about that, apart from the company trying their best not to hire someone unscrupulous.”

“A colleague of mine, after each call, used to attempt to log in to the customer’s email account using the email address and password supplied for their online login details for internet banking. About 7 times out of 10, he got in. Moral of the story: Use different passwords for different accounts!“

Bank Robbers Have Bank Accounts Too, Ya Know

“We had a guy rob the bank and then try to deposit the money into his account the next day. 😳”

If you’ve ever worked in a bank and have a ✨horror story✨ or an ✨employee secret✨ that rivals any of these, please share them in the comments below!!!!!!!!