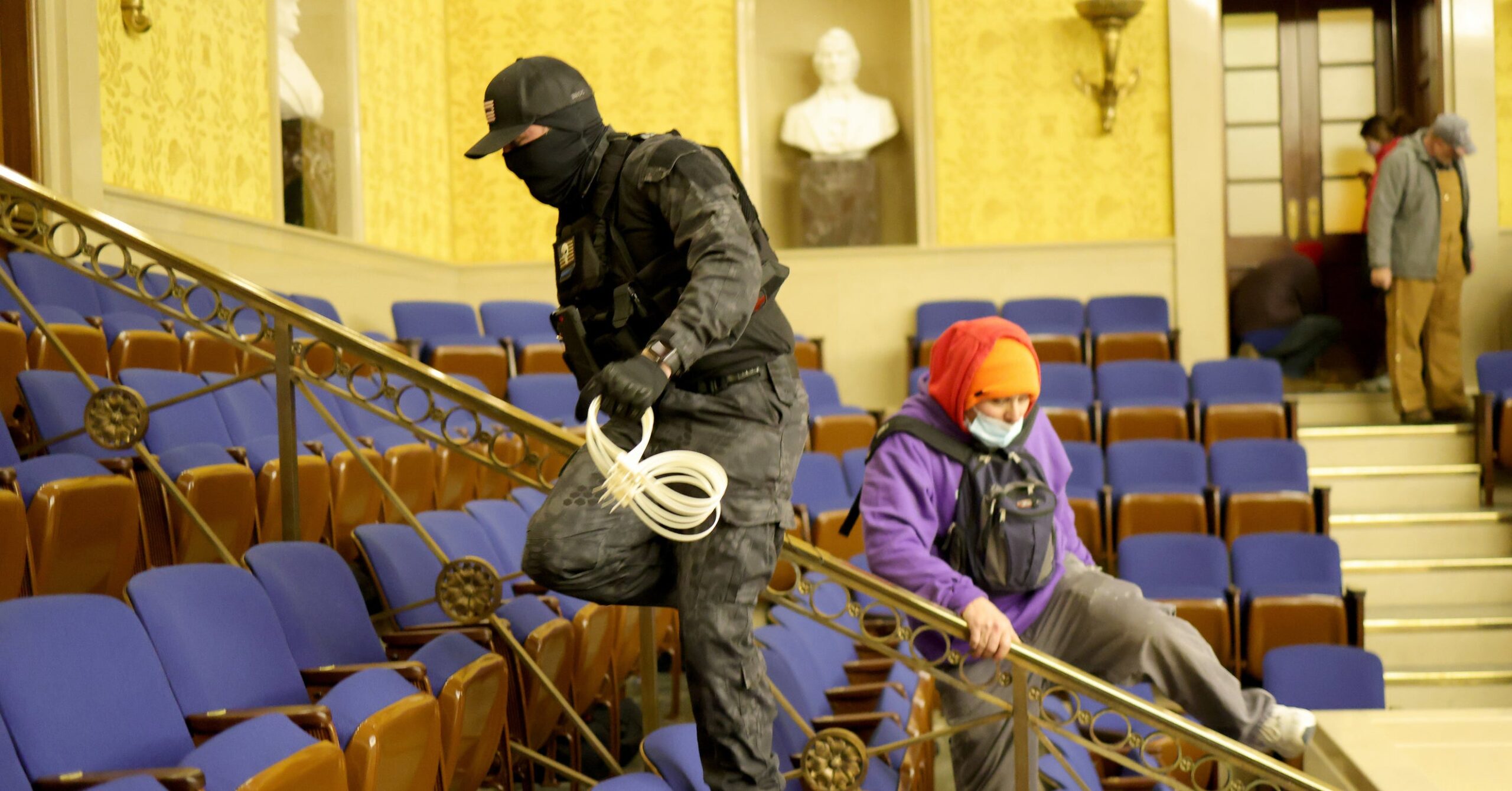 WASHINGTON — A federal appeals court on Friday revived a detention fight over two people charged in the Capitol insurrection, laying out new standards for keeping alleged rioters behind bars that within hours were applied to two defendants in another case, helping them win release from jail.

In a 2–1 decision, the US Court of Appeals for the DC Circuit ordered a lower court judge to reconsider his decision to keep Eric Munchel and his mother, Lisa Eisenhart, in jail while their cases go forward. US District Judge Royce Lamberth had ruled in February that Munchel — who was photographed inside the Capitol wearing tactical gear and holding plastic zip-tie handcuffs — and Eisenhart presented “a clear danger to our republic” and that there were no release conditions that would “reasonably ensure the safety of the community.”

But DC Circuit Judge Robert Wilkins wrote Friday that Lamberth’s 17-page opinion failed to articulate how the two posed a danger when they hadn’t actually been charged with committing specific violent acts at the Capitol on Jan. 6. Lamberth wrote that the allegations against Munchel showed that he was “willing to use force to promote his political ends,” but the appeals court found that the judge didn’t explain how he reached that conclusion when there was no evidence Munchel hurt anyone or broke anything.

“In our view, those who actually assaulted police officers and broke through windows, doors, and barricades, and those who aided, conspired with, planned, or coordinated such actions, are in a different category of dangerousness than those who cheered on the violence or entered the Capitol after others cleared the way,” Wilkins, joined by Judge Judith Rogers, wrote.

Munchel and Eisenhart will remain in jail as the case goes back to Lamberth for another round of arguments.

Friday’s opinion marks the first time the appeals court has weighed in with a specific framework for how lower court judges should think about pretrial detention in the Capitol riot cases. The decision sets precedent that is now binding on all of the district court judges in DC and moves the bar higher for the government to successfully argue for pretrial detention for other defendants who, like Munchel and Eisenhart, aren’t charged with assaulting police, property destruction, or conspiracy and have minimal or no previous criminal record.

“It cannot be gainsaid that the violent breach of the Capitol on January 6 was a grave danger to our democracy and that those who participated could rightly be subject to detention to safeguard the community,” Wilkins wrote. “But we have a grave constitutional obligation to ensure that the facts and circumstances of each case warrant this exceptional treatment.”

The ripple effect of that ruling could be felt almost immediately after the appeals court released its opinion. In three consecutive detention hearings in the Oath Keepers conspiracy case on Friday, District Judge Amit Mehta cited the decision, asking both the prosecution and defense to speak to whether it applied to those instances.

Ultimately, Mehta granted bond to both Connie Meggs and Donovan Crowl, noting that while both entered the Capitol building along with other Oath Keepers, they did not play a leadership role in planning or carrying out the alleged conspiracy, nor is there evidence that they committed acts of violence. He called Crowl “a close call” and confined him to house arrest until trial.

“What the circuit is emphasizing is the question here is a narrow one,” Mehta said. “What risk does the person pose to an individual or democratic institutions?”

The judge turned to the Munchel ruling a third time to consider Kelly Meggs’ request for release from jail. The husband of Connie Meggs, he is accused by the prosecution of being a leader of the group of Oath Keepers who pushed their way into the Capitol, and of helping recruit, finance, and organize the events of that day. Encrypted messages and phone records presented by the government show that he was in touch with Oath Keeper leadership, including the group’s founder, Stewart Rhodes.

In addition, prosecutors presented evidence yesterday that the defendant misled the court and the FBI about his participation in firearms training last year. Earlier this month, Kelly Meggs had claimed in a filing that he “never served in the military nor has he undergone any paramilitary training,” but evidence first published by BuzzFeed News revealed that, in fact, he and his wife had attended two “gunfighting” training sessions run by a former US Marine last year.

“I think Mr. Meggs is in a very different position than the defendants were in Munchel,” said Mehta, who denied his request for release from jail. “Mr. Meggs has presented as someone who through his words and his deeds and his conduct is someone who is dangerous.”

The vast majority of the more than 300 people charged in the insurrection have been allowed to go home post-arrest while their cases go forward with no objection from the government. The US attorney’s office in Washington has mostly focused its requests for detention on cases that involve allegations of assault on police, conspiracy and advance planning, and destruction of property. But in some cases, prosecutors have argued that a defendant’s actions on Jan. 6 had sufficiently violent overtones or that they’d made threats of future violence that justified keeping them behind bars.

In Munchel and Eisenhart’s case, prosecutors argued Munchel grabbed the plastic handcuffs after finding them in the Capitol “comprehending that they are instruments of restraint and kidnapping.” The government cited video that Munchel recorded on Jan. 6 that captured him saying he was “Fucking ready to fuck shit up.”

Lamberth wrote in his February opinion that Eisenhart was “a self-avowed, would-be martyr,” noting that after the riot she gave a media interview in which she said that she would “rather die as a 57-year-old woman than live under oppression” and “would rather fight.”

As for the fact that neither defendant was charged with specific violent acts, Lamberth wrote that the “portrayal of the alleged offenses as mere trespassing or civil disobedience is both unpersuasive and detached from reality.”

“Storming the Capitol to disrupt the counting of electoral votes is not the akin to a peaceful sit-in,” he wrote.

But Wilkins wrote that district judges had to consider a defendant’s dangerousness and potential threat to the community if allowed to go home “in context.” He wrote that Lamberth failed to show how Munchel and Eisenhart posed a danger to Congress going forward “now that the specific circumstances of January 6 have passed.”

“The appellants had a unique opportunity to obstruct democracy on January 6 because of the electoral college vote tally taking place that day, and the concurrently scheduled rallies and protests,” Wilkins wrote. “Because Munchel and Eisenhart did not vandalize any property or commit violence, the presence of the group was critical to their ability to obstruct the vote and to cause danger to the community. Without it, Munchel and Eisenhart — two individuals who did not engage in any violence and who were not involved in planning or coordinating the activities — seemingly would have posed little threat.”

Judge Gregory Katsas wrote a partial dissent, but only to go even farther than his colleagues in saying that he would have ordered pretrial release for Munchel and Eisenhart right away, instead of sending the case back to Lamberth for another round of arguments. A federal magistrate judge had originally agreed to release Munchel and Eisenhart to home confinement with location monitoring, and Katsas wrote that Lamberth “gave no plausible explanation for why these stringent conditions would not reasonably ensure public safety.”

“Their misconduct was serious, but it hardly threatened to topple the Republic. Nor, for that matter, did it reveal an unmitigable propensity for future violence,” Katsas wrote.

Lawyers for Munchel and Eisenhart and a spokesperson for the US attorney’s office in DC did not immediately return requests for comment.

UPDATE This article has been updated to include details of three detention hearings that relied, in part, on the appeals court ruling.