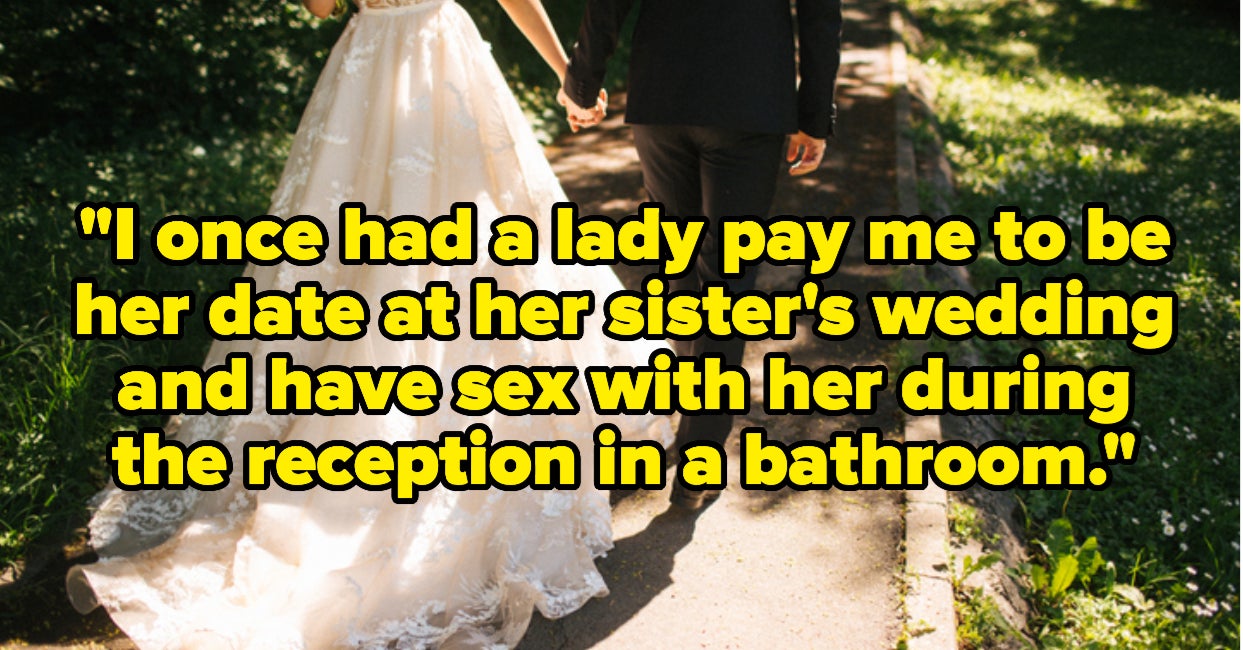 In case this hasn’t already been established enough: Sex work is real work, and sex workers deserve just as much respect as someone in any other profession.

Reddit user u/djkeilz further proved this when they asked, “Sex workers … what’s the weirdest thing someone wanted to pay you to do that you actually did?” Here are some of the responses:

Note: This post is in no way meant to kink-shame. Kink-shaming is 100% not welcome/not OK, and when a sex act is safe and between two consenting adults, there’s no need for scrutiny.

“I had a guy whose fetish was getting scammed. So he paid me $70 for a $25 pair of panties and then had me send him a video of me telling him how dumb he was for falling for my scam. Another guy liked video-chatting with me and just having my camera face my wall while I did work, and I’d ignore him while he sent me messages about how sexy I was.”

“My friend is an escort. She had a regular who would want her to sit in a robe and slippers while chain-smoking cigarettes. Oddly, he didn’t ever want to have sex with her. He just wanted her sitting in his company that way.”

“Someone I will never forget is the blood fetish guy. He made a small cut on his arm and let the blood drip onto his penis, then gave himself a hand job with it. I just had to watch and say dirty stuff to him.”

“My girlfriend used to work as a phone sex operator. The other workers for the line used a message board where they would talk about clients and maybe recommend them to one another. She said the weirdest call she got was from a guy whose fantasy was to be a chicken. However, she was supposed to trick him into cooking him. She said the phone calls would usually go on about how he was a dirty chicken and would need a bath, but then she would turn the heat up and casually add ingredients under false pretenses.”

“I used to sell my used socks for a pretty penny. They wanted nasty, disgusting, wore-these-same-socks-for-two-weeks-while-doing-outdoor-activities-in-the-burning-hot-sun-type socks. I always included a list of the things I did while wearing the socks. Like, mowed the grass, went for a run four days a week, played Roller Derby, walked on the beach, went to a Zumba class, etc.”

“My boyfriend used to be a sex worker, and he once got a woman who said she’d pay him to just lay his head across her lap and let her play with his hair for a few hours. He did so, and afterward he asked why. She said that her husband had recently died and they used to do that. She didn’t ask for anything more, and my boyfriend just decided to let her keep the money.”

“I had a guy with a foot fetish, but he liked me to stand on his face and not wear socks the day before so my feet were stinky (if they were dirty, even better). He also liked to buy me shoes, which were all ugly. But hey, he paid me to wear them, so I would.”

“I was a dom, and one guy’s wife had died and he needed someone to just talk about his grief with, and as someone who lost a partner, I could relate. If the club had let me not charge for his services, I for sure wouldn’t have charged him. He used to bring me gifts, and from time to time he wanted me to be his wife because I looked like her.”

“My friend was friends with a sex worker. One of her clients would buy her cheese, and she would chew it up and spit it on his naked body while he masturbated. It was a different cheese each time.”

“I was a cam girl, and I’ve got tons of stories. One of the weirdest was a short skit that was VERY specific, and clearly half of a scenario. For example, me nodding at specific timestamps, pointing to my left boob, smiling at specific timestamps, then saying, ‘Goodbye’ in a really cryptic way. I asked the buyer what it was for, and it turns out it was to act out a scene from an anime. I got $500, so I’m not complaining.”

“I once had both of my fists up someone’s butt. I got paid, and it was fantastic; I felt like I was conducting a science experiment. Also, my client was quite attractive.”

“I knew a call girl, and she once told me that a guy paid her to spend the day at his house. He would cook for her, clean the house, and just do other general things around the house, and she had to humiliate him, telling him it wasn’t done right. She told me that he jerked off while she told him that the thing he had made needed more seasoning.”

“I had someone always pay good money to touch my legs and lick my armpits. He paid really well. Why did he want to lick my armpit? I do not know.”

“I once had a lady pay me to be her date at her sister’s wedding and have sex with her during the reception in a bathroom.”

And finally, “This is one of the sweetest ones: A guy paid me to send me poetry and playlists he made for me.”

Do you have any stories about tasks you’ve had as a sex worker? Share them in the comments!