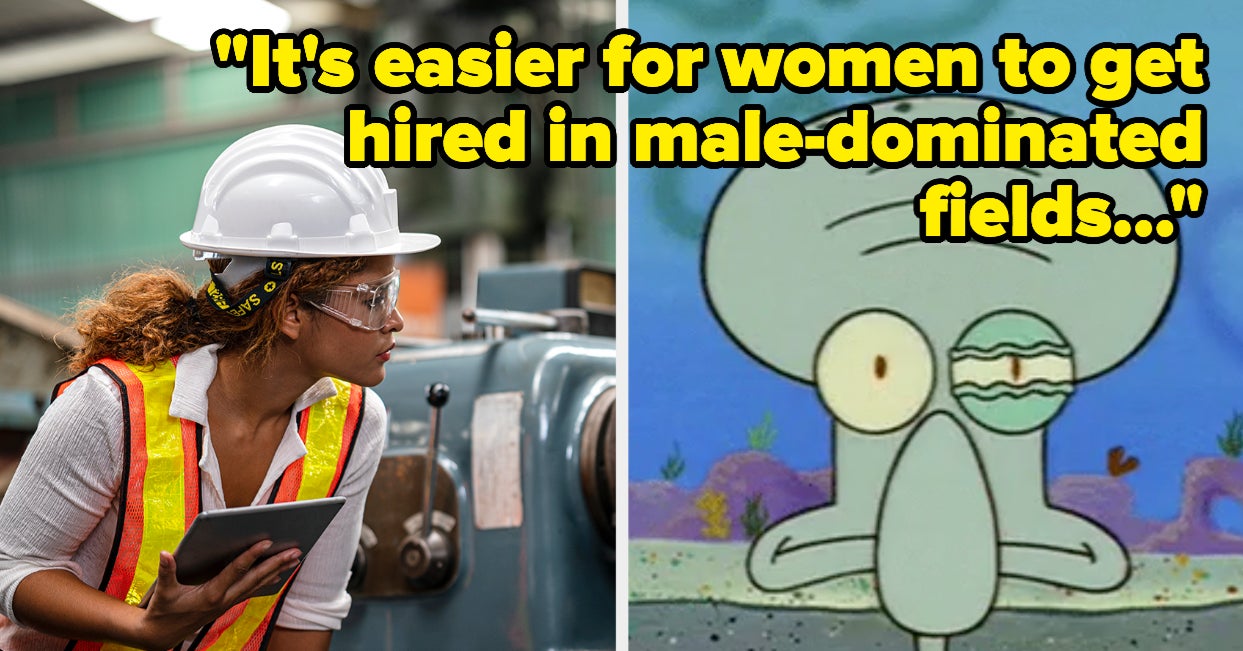 Recently, Reddit user u/OMMOPOWER asked people to share 100% untrue myths about women that they’ve heard, and the responses were a painful reminder that society has a loooong way to go.

“‘Women never say what they mean’ is such an infuriatingly common comedic trope. It’s just an excuse to not take a woman’s words seriously.”

“It’s ridiculous that women are seen as overly sensitive creatures ruled by their emotions, painting men in the role of potential caretakers and the rightful decision makers. Women aren’t children!”

“Men genuinely not understanding how different our day-to-day is and how most inequalities are deeply rooted in misogyny, racism, and classism.”

“That all women want kids and if they don’t they will always ‘change their mind when they get older.'”

“A man who ‘takes a walk’ when he gets angry in a situation is being thoughtful; a woman who does the same ‘can’t handle the situation.’ Men are emotional creatures too, but their emotions manifest in ways that are more ‘acceptable.'”

“That if a girl is nice to you, that automatically means she likes you.”

“That women dress for men, and enjoy being catcalled.”

“That apparently anything I say means nothing because I have a high-pitched voice, so any points I make are met with blank stares and I’m forced to screech just to be listened to.”

“That if I’m not all smiles and giggles I must be on my period.”

“That women talk a lot. We hardly get a chance to talk and the world is filled with men talking on TV, at work, in class—constantly.”

“That eating disorder patients are vain. It’s an illness, not a side effect of watching too much Top Model. While the pressure to be thin can play a part in causing insecurities and triggering an eating disorder, patients are not simply obsessed with being pretty.”

“That we want more attention when we say we’re ‘fine.’ Just another way for men to call women overly emotional or hot and cold. We usually communicate our frustrations very clearly, they just choose not to listen.”

“I hate the stereotype that women are bad drivers. Especially when insurance companies actually charge more for men when they’re first driving because they’re a higher risk.”

“That women can’t be political leaders because their hormones or PMS will trigger them to initiate war or some crap. As if men haven’t been doing that for years as a result of testosterone and ego.”

“That office furniture is designed for everyone. I can either sit comfortable back in my chair, or put my feet on the floor, but not both. If I lower my chair all the way, the desk or table is then way too high.”

“When you are mad it means you are irrational. Or if you speak up in a meeting you must be trying to hijack the show.”

“That our bodies and how we present them reflect on our worthiness and right to respect.”

“That it’s easier for women to get hired in male-dominated fields now. It’s not.”

“That if men are upset about something, it’s coming from a place of logic, but if women raise any kind of concern whatsoever they’re being hysterical.”

“That women inherently aren’t as good at STEM subjects than men.”

“That if women post ‘provocative’ pictures of themselves online (what I mean is that if they show a bit of skin), they’re automatically looking for attention from guys and are easy to get with.”

“That silence means yes. Consent is an enthusiastic yes, not the absence of no.”

“That women who have kids can’t be good and successful at their jobs, and that young women who aren’t parents yet are a risk to hire because they might have kids someday. It’s very rare to hear similar thoughts about men.”

“That we all hate each other. Most of my closest friends are other women.”

Responses have been edited for clarity and length.