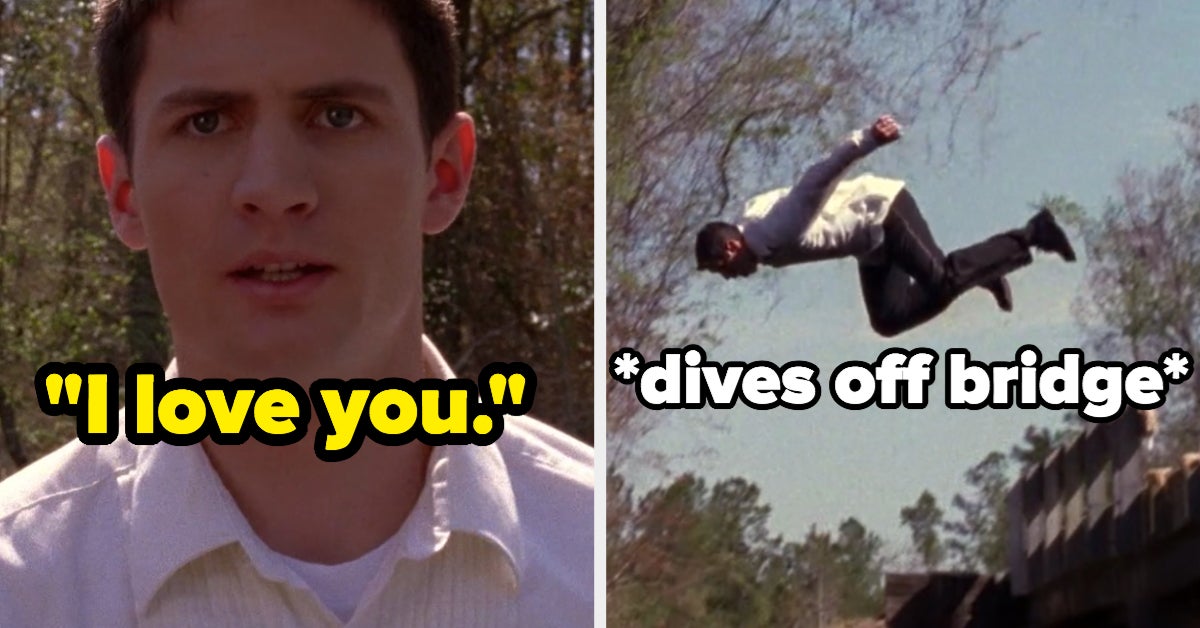 One of the best parts about teen drama shows is how utterly ridiculous the drama gets. I mean, that’s what I’m here for!

But every once in a while, a scene is so over-the-top dramatic, it’s hard to take seriously. Maybe it’s ridiculously angsty, super cheesy, or even ends up being unintentionally funny.

First, when Nathan dove into the river to save Rachel and Cooper while still wearing his wedding attire on One Tree Hill:

When Veronica told Archie they couldn’t break up because they were “endgame” on Riverdale:

When Ginny ended things with Marcus and called him a “joke,” so he went and crashed his motorcycle and almost died on Ginny & Georgia:

When Clare confronted Eli in front of everyone after he seemed to be over their breakup on Degrassi: The Next Generation:

When Julie asked Marissa what was on her mind and she just started screaming on The O.C.

When Jesse cracked a raw egg on Rachel’s head on Glee.

When Serena confessed to her part in Pete’s accidental death, but she made it sound like she literally murdered him on Gossip Girl:

When Archie and his fellow inmate got into a very heated discussion about high school football on Riverdale.

When Amy revealed her pregnancy to Ben and they shared this, um, heartfelt exchange on The Secret Life of the American Teenager.

When Clay waved a gun at his principal and the cops on school property just to make a point on 13 Reasons Why:

When Damon and Elena had this over-the-top exchange on The Vampire Diaries:

When an entire bus full of students crashed as a cliffhanger in the Season 2 finale of Degrassi: Next Class, and then it turned out Tristan was the only one critically injured and everyone else was apparently just fine:

When Finn told Quinn’s parents she was pregnant by singing “(You’re) Having My Baby” at their family dinner on Glee.

When Archie almost got mauled by a bear and made sure nobody ever forgot about it on Riverdale:

When Max had this explosive fight with her brother Marcus after finding out he slept with her best friend on Ginny & Georgia:

When Eli still thought Clare’s baby was Drew’s and not his, so he had some not-so-nice words for her on Degrassi: The Next Generation.

When Liam cheated on Naomi with her sister, but everyone thought he actually slept with Annie and outcasted her and it dragged on for like, half a season on 90210:

When Miles showed his whole class graphic footage of his boyfriend getting surgery following the bus crash in Degrassi: Next Class.

When Paige literally tried to drown Emily and then they started dating like, three episodes later on Pretty Little Liars:

When Landon and Hope had sex for the first time and then he literally turned into mush and DIED right after on Legacies:

And finally, when Logan’s dad told Rory she didn’t have what it took to make it as a journalist, so she stole a yacht, dropped out of school, and cut her mom out of her life on Gilmore Girls:

Oh, teen dramas! We love you so!