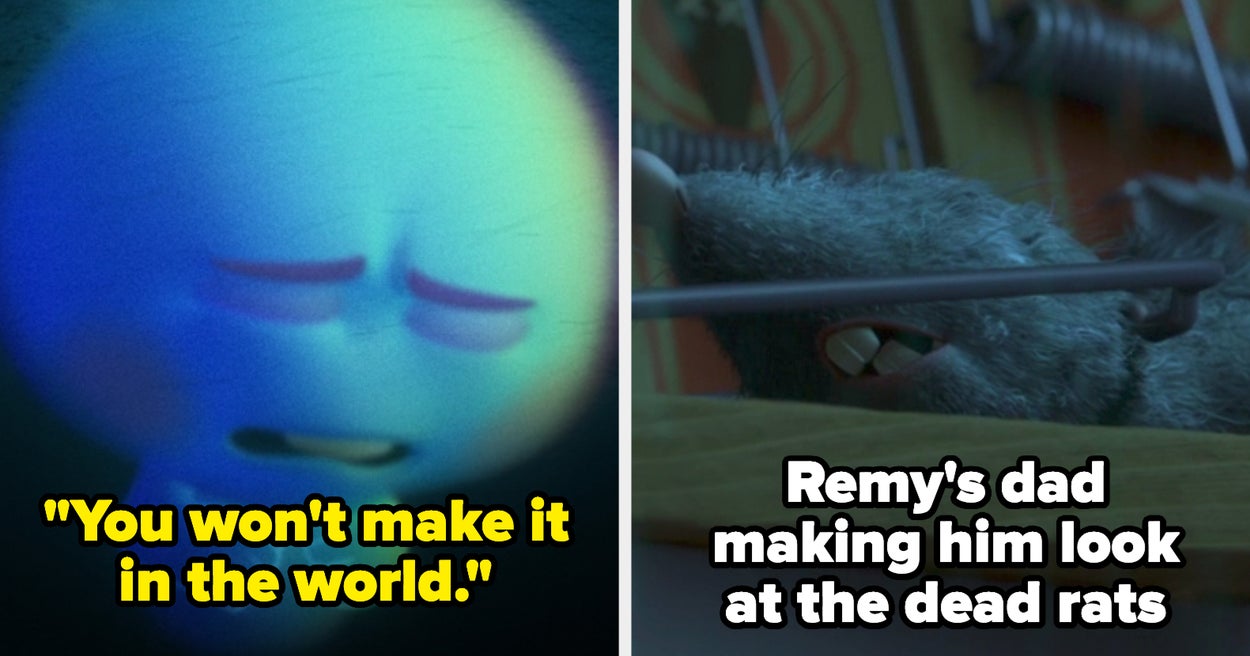 Recently, we asked the BuzzFeed Community to share what moment in a Pixar movie or short they felt was super dark. Here are some of their responses!

Note: Spoilers ahead! Also, there are mentions of suicide and depression.

In Soul, when 22 became a lost soul and Joe realized the real “spark” was just a willingness to live:

In Ratatouille, when Remy’s dad took him to look at the dead rats in the poison shop:

In Cars 2, when one of the cars was tortured and killed:

In Big Hero 6, when the building exploded, killing Tadashi:

In Monsters, Inc., when Sulley thought Boo had died:

In Finding Nemo, when Marlin lost all hope of rescuing Nemo and left Dory behind:

In The Incredibles, when Syndrome died by being sucked into a jet turbine:

In Coco, when Miguel realized Ernesto had stolen Héctor’s songs and murdered him:

In A Bug’s Life, when Hopper almost crushed Flick’s head in front of all the ants:

In Coco, when Ernesto was trapped underneath the bell:

In The Incredibles, when Helen thought Bob was cheating on her:

In Monsters, Inc., when the scream extractor was almost used on Boo:

In Toy Story, when Woody saw all the disfigured toys:

In Finding Nemo, when Marlin lost his wife and almost all his kids in the opening scene:

In Toy Story 3, when the toys were almost incinerated:

In Float, when the father screamed at his son, asking why he couldn’t be normal:

In Inside Out, when Riley dealt with depression:

In Ratatouille, when the old woman tried to kill Remy and his family, and Remy almost got left behind and shot:

In Up, when Ellie and Carl decorated the nursery and then Ellie had a miscarriage:

In Toy Story 4, when Forky kept trying to throw himself in the trash:

In Inside Out, when Bing Bong was forgotten:

And finally…the Pixar intro with the lamp:

Got any more for us? Let us know in the comments below!