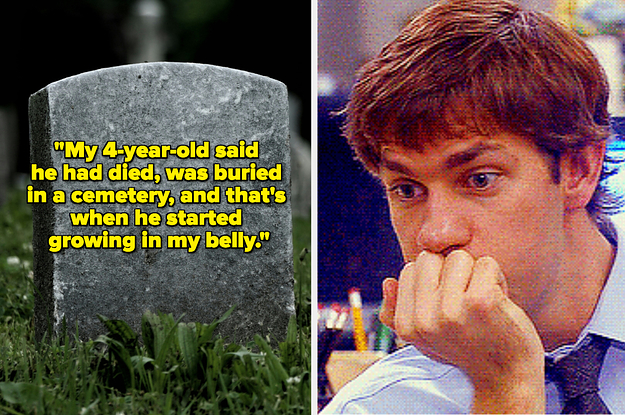 Earlier this week, Reddit user u/TapiocaTuesday asked the AskReddit community: “Parents, what spooky ‘past life’ memory did your kid utter?”

And the thread soon had thousands of replies, full of creepy stories by people who either had kids, knew kids, or were the kids themselves that said something about their “past life.” Here are some of the top-voted and best comments, which may make the hair on the back of your neck stand up:

“Back pre-pandemic, I was watching my friend’s then 3-year-old for her and he saw a big military ship and he got this kind of faraway look, and said, ‘I remember when my boat sank. There were so many sharks.'”

“I said, ‘What?’ He blinked and, said, ‘What?’ and then started asking questions about the boat. I mentioned it to my friend and she said, ‘Yeah, he does that sometimes.'”

“When I was very young and still unable to string sentences together, my mom and I were sitting at the dining room table. She was crying and I comforted my mother by telling her without any babbling or hesitation: ‘It’s okay, I used to be your great grandmother, I’ll take care of you.'”

“I have no memory of this and my mom said I went back to my baby-like talk immediately after. She stopped crying, probably because it scared the shit out of her.”

“I used to watch my nephew when he was about 3 or 4. One day, he was at my house and pointed to a magnet of Arizona — it had a picture of the desert with rock formations. Kid pointed at it and asked where it was. He said he used to live by ‘red rocks like that’ with his first family.”

“”(The first family) all had straight, dark hair (his is blond and curly) and that he had a mom, a dad, and a brother, that is until he went too far into the desert, too close to dark, and got eaten by ‘not dogs, not wolves, but smaller.’ I said, ‘Coyotes?’ And he kind of mouthed the word and said, ‘Oh, that’s what you call them.’ Then he was sad and didn’t want to talk about it anymore, so we had lunch and that was the first and last time he mentioned it.”

“My coworker has a son who, when he was about 3, told her he used to grow rice and lived in a place where two rivers met. He was able to name the rivers, and she located it on a map of East Asia. Pretty wild.”

“My father said that when my brother was 3, he said something like, ‘When I was older I had a pretty girlfriend and we died in a car.'”

“My parents don’t use Reddit, so I’ll answer this for them. I think I was 3 and playing with a corkscrew when I blurted out that ‘I used to have one of these when I had black hair!’ (I’m blond). My parents said they asked me what it was and I responded that it’s used for opening wine. Freaked the hell out of them.”

“My at-the-time 5-year-old son (now 31) woke up one day and asked me, ‘Where is Banjo? When are we going to look for him?’ I was shocked. Banjo was the name of our family dog, a Bull Terrier, that we had on the farm when I was still a pre-teen.”

“One day there was a flash flood in our area (Upington, South Africa) and my little brother was stuck in the middle of the raging Orange River on a rock. Banjo jumped in the water (he loved swimming) to rescue my brother, but he got swept away by the powerful current and we never saw him again. My brother had to stay on that rock for a full 19 hours before the water was safe enough for a boat to cross to get to him. My brother was distraught about our dog having been presumably killed by the flood. Only two years after that incident, my brother was killed while cycling when a speeding vehicle hit him from behind.

I have never told my son about Banjo. There’s no way he could have known that name. My son has been acting in ways that remind me of my deceased brother. They have the same favourite color, they like the same food, they both like to sing… I can’t help but think that the soul of my brother migrated into my son somehow.”

“When our son was maybe 3 or 4, he described his life as a ballerina on stage — from the lights, to the music, to the applause. His next words chilled me to the bone: ‘I was at a party on a boat, and I fell into the water, then POOF I was here.'”

“I asked him to relate the story when his father came back from a business trip a couple weeks later, and it was identical. But after that we never discussed it again. I didn’t want to go there.”

“My little brother was born just after 9/11. When he was a toddler one time, he went on about how he used to work in a tall building and wore a suit and tie. Freaked my parents out.”

“When I was a kid, I told my parents that I died in a fire on a big ship during a war. That alone isn’t super special, but they asked what kind of ship and I said, ‘A blockade runner.’ That’s VERY specific knowledge for a small child, right?

If I remember correctly, it was called the Zephyr and was in Charleston, SC at some point. I’ve not found any info about that ship being real, but I haven’t remembered in years.”

“My son said once, ‘Mommy, when I was big and you were little, I remember when we danced in the kitchen.’ The only person I ever danced in a kitchen with as a child was my grandfather.”

“When my son was 4, we had driven past a cemetery. He asked me if I remembered when he died and was buried. I said no and asked him what he meant by saying that. He said he had died, was buried in a cemetery, and that’s when he started growing in my belly. The hairs on the back of my neck stood up when he said this. He doesn’t remember saying this.”

“Between the ages of 3 and 5 I talked about ‘when I lived in Ireland,’ and I was able to tell my parents the names of the places that I remembered. My mom said she was in absolute shock because I was so casual about it. Also, this was in the early ’80s, in South America, there was no internet or anything like that.”

Edit: guys, my mother researched this stuff after I started talking about it, that’s how she figured out that I was naming real places.”

“At age 5, my parents bought me one of them toy police cars, and I spent a little while playing in it, but apparently didn’t seem happy. My parents asked why I didn’t seem to be liking it, and I apparently told them I didn’t like it because I remember being stabbed inside a car like this before I came here, I said my skin was black then, though. They said they were a bit taken aback by this and just didn’t speak anymore about it.”

“I take it from how they speak about it that to them this seemed pretty weird, and I understand that because it makes me feel weird as well. Out of curiosity, I thought I’d google and try find if any police officers died from stab wounds around the time I was born. Now I was born in the UK in 1996, I am sure that many police officers die in the line of duty each year, but one did stand out: In 1996, the year when I was born, they had one registered police death, the officer was Black and died after being stabbed to death in his own patrol car.”

“My mom told me that when I was 3 or 4 that I scream-cried when we passed an old blue Volkswagen Bug. I told her that was the car I died in. It was apparently very hot and “I had a baby in my belly.'”

“I don’t have kids, but when my brother was a toddler he said something to my mom about throwing hay in the window for the horses. My grandfather died before his birth and was a farmer. The barn had windows and he would just throw the hay in the windows for the horses to eat. My mom was really freaked out, but he never said anything else similar again.”

“My 5-year-old daughter said to me ‘I was in your belly twice, mama. The first time I died before I came out…but I came back.’ I did lose my first pregnancy 8 months before getting pregnant again. She was never told. I don’t know what it was — but that’s what happened.”

“My daughter asked me, ‘Remember my fancy hat?’ and when I said no, she said, ‘Yeah, before I was dead, I used to work in a bank. I saved my money and bought a hat in a round box. I was on the bus and a man almost sat on it. Then the bus crashed and I died.’ She was about 3 and totally casual about it.”

“I don’t believe in the paranormal. I’m a pretty reasonable guy. I have degrees in science and healthcare and I’m pretty grounded. But since I was a child, I had a memory of me stumbling out the backdoor of a club, I couldn’t hold myself (either really drunk or on drugs) and I slipped down a staircase, hit my head in the alley and died.”

“I was about 19, I was thin, had long blonde hair, I was wearing a brown-red leather jacket. I remember the neon signs, the staircase, the door I walked out of, even the interior. I can paint the picture perfectly, if I had any talent in art.

ANYWAYS! So two years ago, I took a leisure trip to Budapest, and while exploring the ruin pubs with my wife. I FOUND THE FUCKING ALLEY! It was funny because I remarked to my wife earlier, when we arrived, that I felt something about Budapest that felt like ‘home’ and familiar and I felt oddly too comfortable there, like I could have never left. I think about this quite often.”

“I’ll answer for my grandpa since he passed, sadly. My dad and uncle said to me that when I was 3 or 4, I once looked at my grandpa and said ‘J.B., do you remember when we went bar hopping in Australia between island campaigns during the war and I tried to flirt with the brown-haired Australian girl before I died on that island?'”

“Apparently I said that and my grandpa admitted that during WW2 he and his friends went bar hopping and one of his closest friends tried to flirt with a brown-haired Australian girl and died in the Philippines. According to them, my grandpa never told them — let alone me — about that. Also J.B. was my grandpa’s initials he went by, but I didn’t know that yet.”