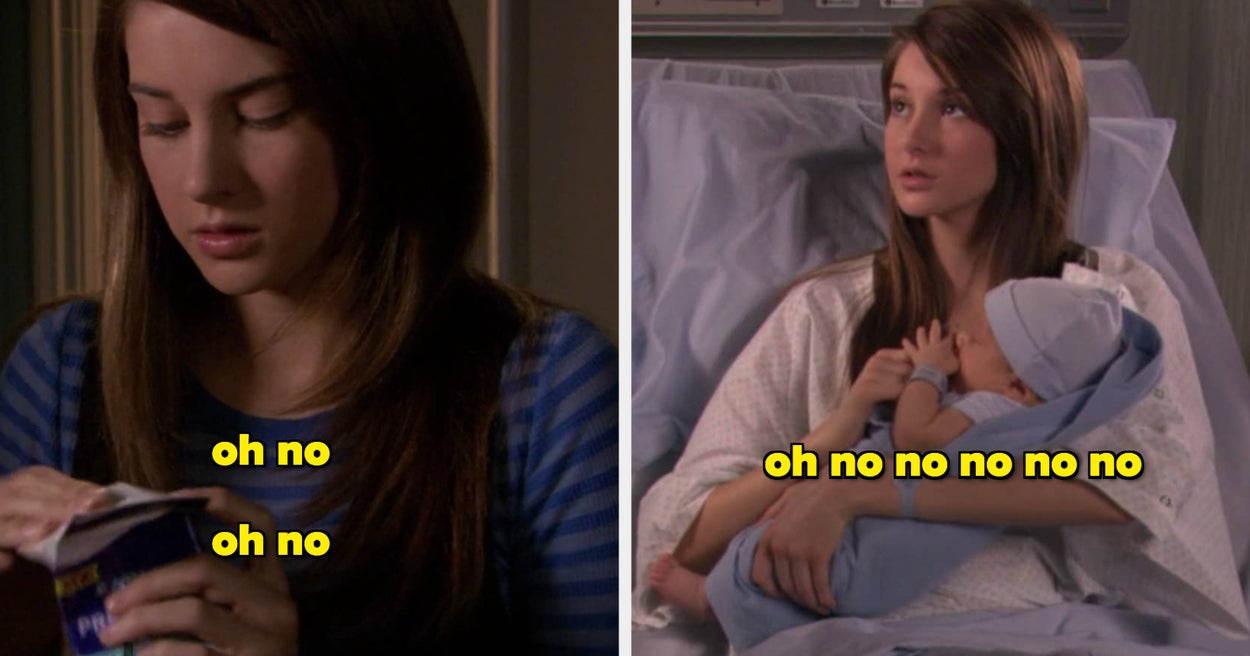 Welcome back to First Episode/Last Episode, where I, Farrah, watch only the pilot and finale of a television show and give you my honest thoughts. Here are some TV series I’ve tackled over the last year and a half! Today we’re going to tackle a show I’ve heard a lot about but never seen: The Secret Life of the American Teenager.

• “Lost” Is An Iconic Show I’ve Never Seen, So I Only Watched The Pilot And Finale

• As Someone Who Has Never Seen “Criminal Minds,” I Watched The Pilot And Finale And Nothing In The Middle

• As Someone Who Has Never Seen “Gossip Girl,” I Watched The Pilot And Finale And Nothing In The Middle

• As Someone Who Has Never Seen “Sex And The City,” I Watched The Pilot And Finale And Nothing In Between

• I’ve Never Seen “Pretty Little Liars,” So I Watched The Pilot And Finale And Nothing In Between

• I’ve Never Seen “Dawson’s Creek,” So I Watched The Pilot And Finale And Nothing In Between

• I Watched The First And Last Episodes Of “The O.C.” Without Any Context Of The Middle

Here’s everything I know about the show: It stars Shailene Woodley of Divergent and Big Little Lies fame. She accidentally gets pregnant! And honestly, that’s all I know regarding the plot — other than that TikTok has pointed out some pretty cringey writing or acting from certain scenes in the show.

Without further ado, I am thrilled to jump into this one. Let’s do this.

As her mom yammers on about dinner, her daughter ~sneaks~ into the bathroom.

And lo and behold, she has a pregnancy test! A lot is happening in the first 60 seconds of this show.

Then we cut to school the next day. I just need to note that “Girlfriend” by Avril Lavigne is playing in the background as Shailene walks through the halls of her high school, which is an upgrade from the cheesy ’90s piano music.

Now the attention is turned toward this blonde girl and her jock boyfriend. Is she the ~Queen B~ of this school? I get mean-girl vibes from her. And a little bit of Ashley Tisdale flair.

Meanwhile, Shailene (OMG, I haven’t caught her character’s name yet) blurts to her BFFs that she *whispers* HAD SEX.

I don’t know who this friend group is, but two-sweater boy over here has a thing for Grace Bowman the Blonde — who is a Christian and not a mean popular girl, as I assumed.

Anyway, his friend is like, “My dude, you aren’t getting with Grace,” and he’s like, “Okay, well, who WOULD get with me?” And then she points to Shailene.

Then we cut back to these clowns who MAKE A BET to see if sweater guy can get with Shailene. I MEAN!!! Have these children not SEEN 10 Things I Hate About You?

Even though Shailene told her friends the guy didn’t go to her school…IT’S ACTUALLY THIS DOUCHEBAG. Literally all the high school guys are terrible in this show.

Sweater boy, who I think is called Ben, ends up going to the guidance counselor’s office to try to switch into band to get closer to Shailene (aka Amy). He’s very desperate.

After school, we meet Amy’s sister at the dinner table, who’s being slut-shamed by her entire family for wearing a crop top!!!!

We cut to the boy Amy slept with (Ricky), who was acting kind of like a dick at first. We see he’s in therapy. The writers have humanized him a bit with a really awful backstory about his abusive dad.

To cope, he enjoys getting with as many girls as he can. He also sort of blows off his therapist, who’s only trying to help!!

Now it’s time for the football game!!! Which…never gets shown! Except there’s a very awkward pep talk in the locker room by Jack, who tells us how tempting women are and asks God not to lead him astray???? Cool.

It seemed like Grace was going to have a hard time getting people to her Christian party, but apparently THE WHOLE SCHOOL WENT AFTER THE GAME?? Also, I guess Grace is a cheerleader and Jack is a football player, and the whole team came. Anyway, Ben asked Amy on a date to this Christian party. Which is…essentially just a school dance.

It’s kind of rude that Ricky’s friends are literally spying on his date????

Anyway, Ben leaves and Amy’s friends are like, “WE HAVE A GREAT IDEA! Just start dating Ben and tell him the baby is his after you have sex with him!” NO FLAWS IN THIS PLAN.

Even better points are made.

The clueless Ricky appears and talks to Amy. Only, it’s one-sided because Amy SAYS NOTHING AND ONLY NODS. Then he’s like, “Hey, help me get with Grace.”

Ben — after realizing that he doesn’t want to have sex with Amy as much as he wants to fall in love with her — swoops in and tells Ricky to kindly fuck off. Then Ben asks Amy to dance. It’s a little sweet.

Grace and Ricky dance together, and he *knows* he is trouble.

Then!!! THEN! We jump to Jack and another girl, named Adrian, who is supposedly ~seductive~, and we learn that Jack had sex with her last night?!

But Adrian knows what she wants and was like, “It wasn’t a mistake for me. Sorry you regret it because you have a girlfriend!”

And then Jack invites the Holy Spirit into the conversation.

And gently loses his mind.

But *GASP* they end up kissing again!!!!! In the hallway!!! Outside of the dance where THE ENTIRE STUDENT BODY CURRENTLY RESIDES.

Grace’s brother sees them and starts screaming for her, so naturally the entire student body (and the guidance counselor lol) comes out to find them standing there together. He didn’t even yell that they were kissing! So it’s a little dramatic.

Meanwhile, Ben and Amy are literally the only two people left at the dance. Lol, the end!

We open up with Shailene looking older and sleeker! She’s also wearing black and looks sad, so…was there a funeral?

HOLD ON. Amy and RICKY are getting married?!?!? Did they not just graduate from high school? Are they still in high school??

OH MY GOD. No! The writers absolutely phoned this finale in, didn’t they? We’re just going to cut together clips from the ENTIRE SERIES AND CALL IT A FINALE?? I’m screaming. But I guess it’s filling me in, so.

Listen, I’m in for a ride right now. First Ben proposes to Amy??? Then ADRIAN is pregnant with HIS CHILD??? What in the soap opera heckin’ heck?

Amy moved to New York??? Did she graduate from high school? I’m so lost.

But now she’s with…Ricky??? And that’s her son? And they live in New York?

I’m assuming Grace and Jack got back together after the whole Adrian scandal???

Anyway, I guess Amy had her baby because here it is in yet another flashback!

I have whiplash from all these flashback scenes, but we’re now in the present. The gang has just graduated from high school, and we get another locker scene where Ben is still pining for Amy.

This is such an awkward goodbye scene. It’s like…do they all hate each other? Are they just stiff? Or maybe they aren’t as close friends with Amy as they used to be??? Because Amy mentions the wedding tomorrow and it *feels* like they are not invited?

LOL Jack is alive. Grace’s dad is dead. What a roller coaster for me. Adrian and Grace are on good terms. Truly a ride.

Grace and Jack walk off, so I guess they’re on good terms too? Meanwhile, Amy and Ricky take their sweet time just…standing around in the hall after graduation.

Ben comes up to them and is like, “Listen, she’s not married until she says ‘I do’!!!” Then Amy basically tells him to fuck off, so he does. WTF. Why are they so mean to Ben!!

Guess what? MORE FLASHBACKS!!! Apparently, Grace did not wait until marriage to have sex with Jack. And having sex with her did not, in fact, kill him.

HOLD THE FUCK ON!!!! BEN AND ADRIAN GOT MARRIED?!?! LMAO why is this high school full of kids having babies and getting married!!!

We see that Adrian did get pregnant, but she somehow lost the baby. Which is very sad! This seems to have caused a rift between her and Ben. Are they still married??

You guys, this finale is absolutely bonkers. After a very long flashback scene, we cut STRAIGHT INTO A RICKY-AMY fight??? Like, no buildup to this. Just…BAM. They’re fighting! For what!

Do we think this beats the Dawson–from–Dawson’s Creek crying face?

More flashbacks of Amy and Ricky’s tumultuous relationship. But here we see that baby John is born! Aww.

Honestly, what a plot twist it would be if Amy just straight-up murdered Ricky, took baby John, and went on the run. Nobody would see that coming!!!! A truly unpredictable ending!!!

On behalf of the Secret Life fandom…I was honestly disappointed in that finale for you all!!!! It really felt as if no effort was put into it. Did you feel that way? I don’t think I have any desire to watch it, considering that I just sat through a highlight reel during the finale! It was also just as cheesy as TikTok promised me it would be. The only questions I have: Did Ricky and Adrian actually get married and then divorced? How did Grace’s dad die? Why did Molly Ringwald and Amy’s father divorce, and how the heck did he get with Grace’s MOM? Let me know in the comments below — and also let me know what show you’d like to see next!