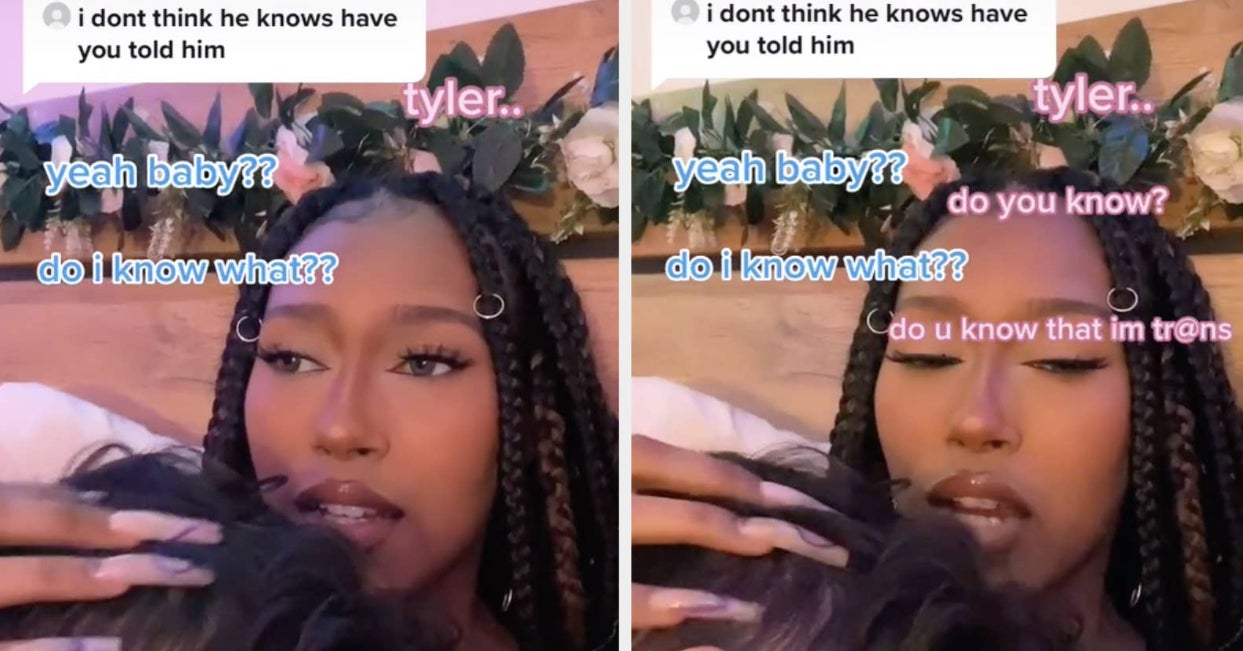 This is Jade Mcfarlane — a TikToker who shares comedic sketches about her life as a trans woman — and her boyfriend, Tyler. The couple recently went viral after responding to a commenter who suggested Jade must be keeping her identity a secret from Tyler, and that he would not continue a relationship with her if he knew she was trans.

“Yeah,” Tyler confirmed. “I know that you’re a perfect, beautiful woman, and you always have been.”

While the sentiment was enough to make Jade’s lip quiver as she appeared visibly touched by his words, Tyler took it a step further and explained exactly why the suggestion that Jade being trans would keep him from loving her is both damaging and anti-trans:

“First off, I want to say trans women are real women,” Tyler began. “They’re completely valid in their femininity. And the fact that people think that just because someone’s trans and I found out — or anyone found out that their significant other is trans — that [this] would take away or diminish the love they have for them, [it’s] completely disgusting to me.”

“People take out their own insecurities and things they’re worried about from their past, and try to apply it to this situation — [it’s] disgusting,” Tyler continued. “Just because you’re unhappy in life doesn’t mean we need to be, too.”

Jade’s comment section quickly filled with an outpouring of support for her and her boyfriend’s speech.

Others were inspired by their relationship and felt connected to and represented by the message.

When speaking to BuzzFeed about navigating negativity online, Jade said, “I receive negative comments on a daily basis, consisting of people misgendering me and telling me how what I’m doing with my life is wrong and a mistake. I wish people would realize how one rude comment can stick with someone forever and create new insecurities.”

“I refuse to let online negativity affect me because it’s always coming from someone who’s uneducated or someone who’s going through a lot and thinks that hating on someone online is going to make them feel better about themselves,” Jade said. “I usually don’t go through my comments anymore. … I won’t feel bad about myself because of what others think. There’s absolutely no point when I could be happy, because what really matters is [what I] think about myself.”

Through her platform, the couple hopes their relationship can inspire others like them to live happily together.

“In my community, relationships are such a hard topic for all of us, and I feel like me showing my relationship publicly lets other trans women and men know we can be loved and cared for, too.”

You can keep up with Jade and Tyler’s journey by following Jade on TikTok and Instagram.