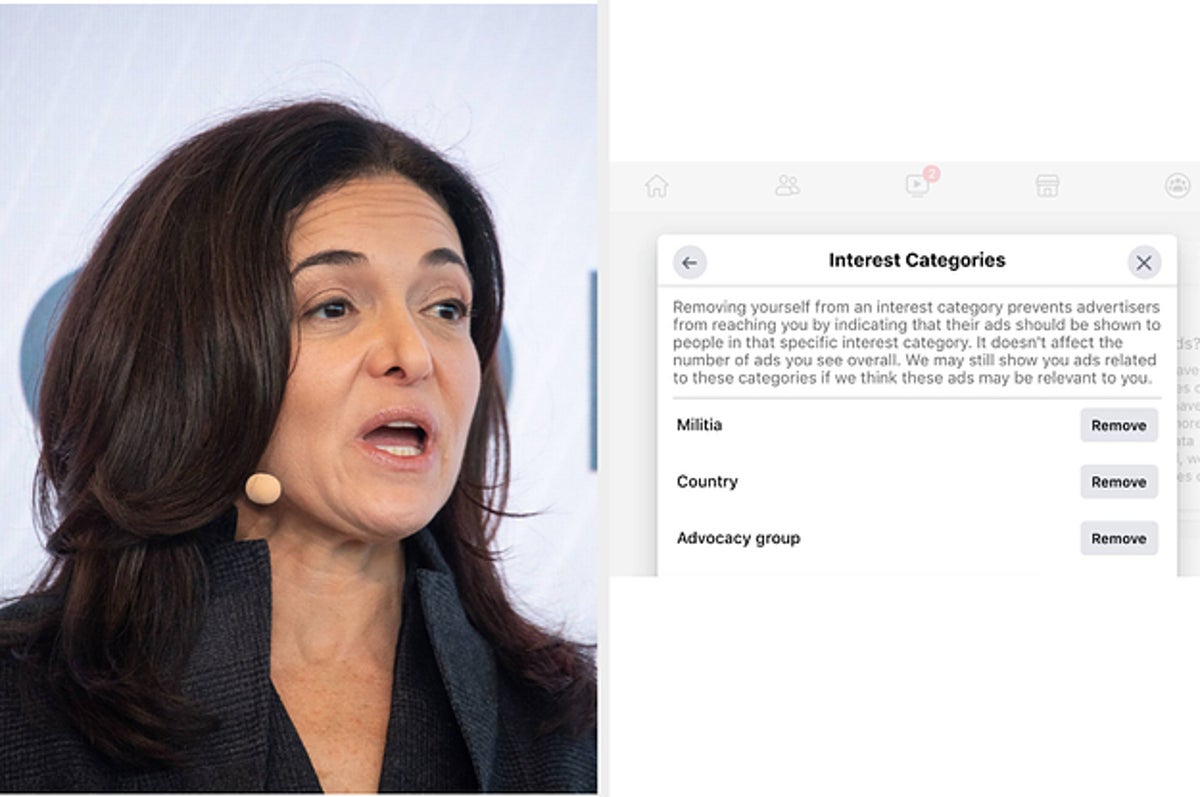 
Facebook’s advertising system continued to categorize some people as interested in militias, long after it placed a ban on violent extremist groups.

Last August, in preparation for the 2020 US presidential election, the social network said it would take down any Facebook pages, groups, and Instagram accounts “tied to offline anarchist groups that support violent acts amidst protests, US-based militia organizations and QAnon.” More than seven months later, the company was still tracking user interest in militias for possible targeted advertising, another misstep in the already spotty and haphazard enforcement of its policy.

On Monday, the Tech Transparency Project (TTP), an industry watchdog group, showed BuzzFeed News that an account it uses to follow and track right-wing extremism on Facebook had been automatically placed into “interest categories” for “militia” and “resistance movement.” Facebook places people in interest categories based on their on-platform activity — including the pages or groups they follow — and allows advertisers to target ads to them based on these interests.

The discovery suggests that despite its policies, Facebook, which has products that are used by more than 3 billion people globally, still struggles to manage its increasingly sprawling advertising platform. BuzzFeed News previously reported that far-right militant groups continued to run ads and operate on Facebook after the company’s ban in the run-up to the 2020 election; some targeted weapon accessory and body armor ads to people following the Jan. 6 insurrection.

“We removed this targeting term last summer and are working to understand why it could appear in Ad Preferences,” Facebook spokesperson Liz Bourgeois told BuzzFeed News.

This is not the first time Facebook’s $80 billion advertising arm has potentially profited from hate or extremism. In 2017, ProPublica found that the company had allowed advertisers to target ads to people who expressed interest in antisemitic topics, including the terms “Jew hater” and “How to burn Jews.” Last year, BuzzFeed News found that the company had been profiting from ads promoting a page for white nationalists and the Boogaloo movement, a loose collection of anti-government extremists who have called for violence and another civil war.

The TTP account that tracks right-wing activity does not post or engage with the content Facebook shows it, though TTP director Katie Paul does scroll through its feed and clicks on links as part of her research. Paul designed the account to look like that of a 32-year-old man based in Texas and follows pages and groups that share pro-Trump memes, election misinformation, and outright calls for violence.

Paul said she used the account to begin liking militia pages and groups in January — which still persisted on Facebook despite the August ban — and showed BuzzFeed News a list of the automatically generated interest categories. In addition to “militia,” there were dozens of seemingly nonpolitical interests, including “Mel Gibson,” “Appalachian Mountains,” and “Soft Rock.” Other interests that Facebook presumed the person would have included “Tea party movement,” “Republican Party (United States),” and “Second Amendment to the United States Constitution.”

Over the last few months, Facebook leaders, including CEO Mark Zuckerberg and chief operating officer Sheryl Sandberg, have insisted Facebook does not profit from civil unrest or hate. In January, Sandberg said in an interview at a Reuters conference that Facebook had taken proactive measures to remove extremist content.

“I think these events were largely organized on platforms that don’t have our abilities to stop hate, and don’t have our standards, and don’t have our transparency,” Sandberg said. “But certainly, to this day we are working to find any single mention that may be leading to this and making sure we get it down as quickly as possible.”

“For over a year now, Facebook has repeatedly claimed to be addressing extremism on its platform while journalists, researchers, and the public are left to clean up after their broken promises,” Paul told BuzzFeed News. “These ad interests show that while Facebook’s promises on threats like militia are empty, its pockets are not.”