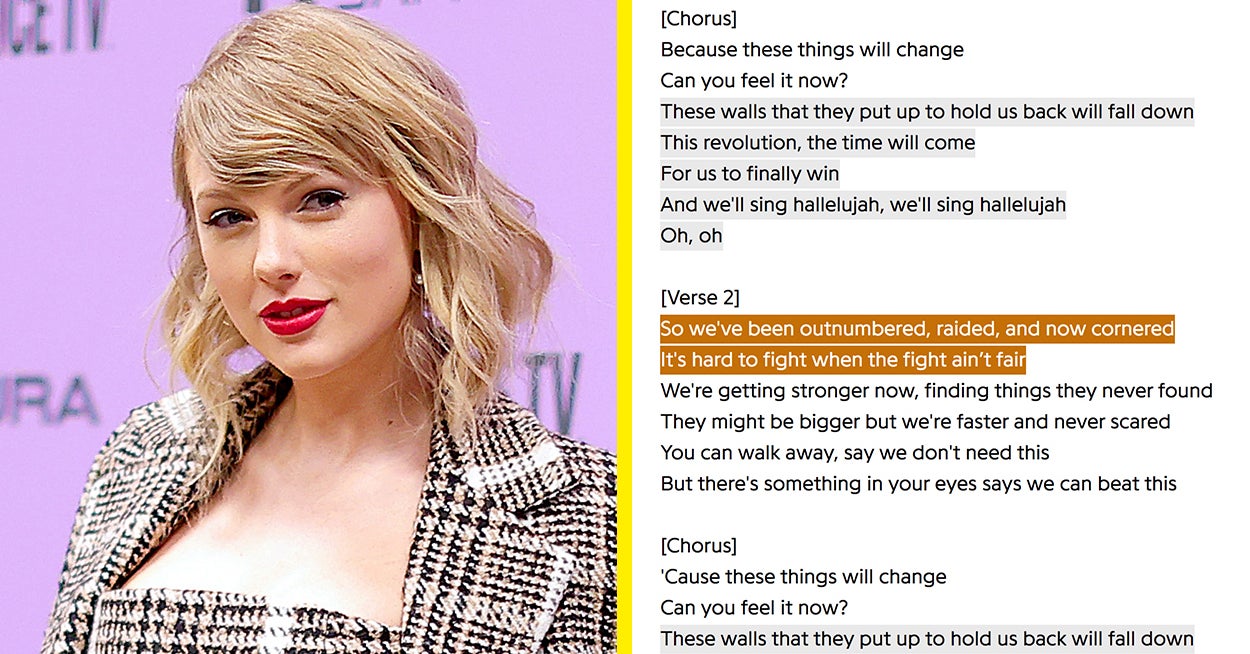 The wait is over! Taylor Swift has finally released the first of her rerecorded albums, aptly titled Fearless (Taylor’s Version).

The new release of the 2008 classic contains rerecorded versions of every song from Fearless and its deluxe edition, as well as “Today Was A Fairytale,” six previously unreleased songs ~from the vault~, and a remix of “Love Story.” We have been fed!

The rerecorded versions are almost indistinguishable from the originals, meaning we get to stream Fearless guilt-free as if 2008 never ended.

Meanwhile, the vault songs are making everyone question why the album wasn’t 27 tracks long to begin with. (The fact I’ve had to live the last 13 years of my life without “Don’t You” may actually be a criminal offense.)

But one song in particular has caught the attention of Swifties, who believe its lyrics have taken on a whole new meaning in light of Taylor’s fight for the rights to own her music.

The song — “Change” — originally appeared as the last track on Fearless, and Taylor wrote it about her experience working with Scott Borchetta under Big Machine Records.

It’s no secret that the relationship between Taylor and Scott Borchetta turned sour in recent years, after he refused to let her purchase the master recordings that she signed away to Big Machine when she was just 15.

In a lengthy post on her Tumblr account in June of 2019, Taylor revealed she had asked to buy her master recordings outright, but claimed Scott counter-offered for her to “earn” them back by re-signing with Big Machine and producing six more albums with the label.

She ultimately refused, knowing he had plans to sell the label, and made the choice to prioritize her future over her past. But, Taylor said, she never dreamed Scott would sell the label to Scooter Braun.

“This is my worst case scenario,” Taylor wrote at the time. “This is what happens when you sign a deal at fifteen to someone for whom the term ‘loyalty’ is clearly just a contractual concept. And when that man says ‘music has value,’ he means its value is beholden to men who had no part in creating it.”

“Any time Scott Borchetta has heard the words ‘Scooter Braun’ escape my lips, it was when I was either crying or trying not to,” she went on. “He knew what he was doing; they both did. Controlling a woman who didn’t want to be associated with them.”

Of course, this dispute is the whole reason Taylor is rerecording and rereleasing her old music in the first place: so neither Scott Borchetta nor Scooter Braun can profit from her life’s work.

And that brings us back to “Change.” The song may have originally been written about Taylor’s hard work with Scott Borchetta and Big Machine — but fans think, with the additional subtitle of “Taylor’s Version,” its lyrics take on a brand new meaning.

The song ends with Taylor winning her battles and emerging victorious over her adversaries. Just as she has with the release of Fearless (Taylor’s Version).

And it’s safe to say fans couldn’t be more here for the new interpretation of “Change.”

We truly couldn’t love to see it more. 👑💛