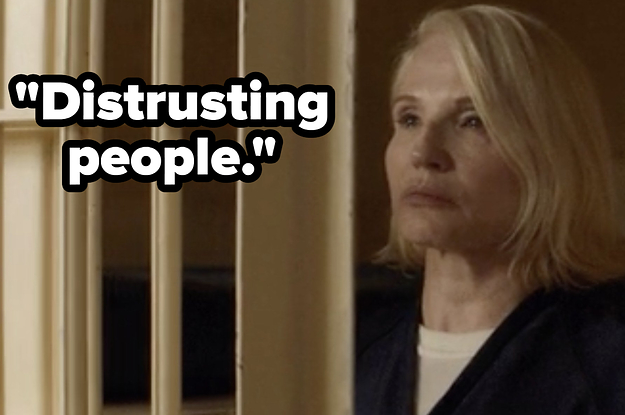 Getting out of jail isn’t instantly puppies and roses. Life on the inside is different, and there are customs that can be hard to shake off when out.

Redditor u/KimJohnChilled asked the question: “Ex-cons of Reddit, what was the hardest prison habit to break after being released?”

People who’ve served time, and others close to them, shared some of the most challenging behaviors to leave behind.

“I don’t smoke, but every time someone offered me a cig I would pocket it. On the inside that’s a bartering chip, took me about a month or two to break.” —u/interchangeable-bot

“Eating everything with a spoon.”

“Being shocked to see sharp things.”

“Like, there’s no desire to use them inappropriately but you are just kinda shocked they’re there. You might be surprised what qualifies as a sharp object. I remember whenever someone tried to hand me a knife to cut veggies I’d be afraid to touch it. Glass was the biggest thing though, just mirrors in all the bathrooms. Real ones. Stopping thinking of objects as weapons is hard.” — u/Skishkitteh

“Telling someone exactly what you’re doing when you do it.”

“After I was released I kept telling my wife exactly what I was doing without her asking. She thought it was funny at first but after a few weeks she got bothered.” — u/carter5oh

“You get used to having to tell authority figures what you’re doing before you do it at all times.” — u/redhedinsanity

“Throwing everything into ramen.”

“We were super limited on the number of pads or tampons they gave us. They didn’t give any to the women in holding cells. There was dried and fresh menstrual blood on the floor and benches.” — u/feiticeirarose

“I agree with all the people who said they ate super fast, but then we would slow walk back from the chow hall — any excuse for a few minutes more outside.

I made sure I never consolidated enjoyable things. If I had a snack — I ate it and concentrated on it. If there was something good on TV, I watched it. Now, I’ll snack while I watch a movie because there aren’t enough hours in the day — but on the inside I was trying to make hours and days go away.” — u/DeuceTheDog

“Eating as fast as you can.”

“Taking a shit with my underwear up to my thighs.”

“To hide my junk. It took a long time to go back to pants around the ankles.” — u/ajdo

“Having your back to the wall.”

“Not an ex-con, but have a good friend who is. He says he always has to have his back pointed towards a wall and be able to see all exits so that he can see who is coming and going and if they’re headed towards him, for safety. He also is constantly scanning the crowd to evaluate threats as well as making sure that he is friends with as many people as he can be so that everyone is his ally. It’s pretty sad really, considering I used to think he was just super outgoing. Now I know that he’s just trying to minimize threats and make sure no one has a reason to want to hurt him. He said that was his strategy when he was in prison for two years; make everybody laugh and be your friend so all the toughest dudes got your back.” —u/SherbetMalargus

“Having your head on a swivel.”

“A somewhat friend of mine [got out of jail] a few years and the one habit he couldn’t shake was distrusting people. He said that people in prison are never nice, and if they are it’s because of a hidden motive. To this day he still doesn’t trust people who act nice/generous/helpful towards him.” — u/ehamo

“Always asking to use the restroom.”

“Not me, but my ex would sleep that way all the time — his arms crossed and wouldn’t move the entire night for a couple months. He eventually broke that habit.” — u/myjobbetternotfindme

“Cursing all the time.”

“Being aggressive and also indifferent.”

“God, I got out two years ago and I cannot for the life of me shake my aggressive posturing… That’s all prison is, being hyper vigilant, and I would argue worse yet, always appearing indifferent. Like you could be kickin’ it with your ‘friends,’ laughing, watching TV, but then even the slightest misphrasing of something or a sudden movement will shift the whole mood of the room at a drop of a dime. So whatever emotion you display has to be instantly shut off and on a moments notice you have to be ‘booted and suited.’ I would return to my unit on occasion and there would be blood smeared on the walls from a fight I missed. You didn’t look at it. Eyes forward, indifferent. Emotion is weakness, and though I was secretly panicking, I had to bury and put on as a cold motherfucker.” — u/PaintshakerBaby

“Going into fight mode when I hear the word ‘bitch.'”

“Mealtime was the hardest for me. It doesn’t matter if you are hungry. If it isn’t mealtime, you don’t eat. When I first got out, i kept missing mealtime (the specific time when you are supposed to eat), sometimes only eating once a day. It took me weeks to realize that I could eat whatever/whenever I wanted. I was all alone, sitting hungry with food in the fridge, because I didn’t eat an hour ago and I couldn’t eat until breakfast.” —u/physical0

“Knocking when you get up from a table.”

“Placing a shirt on my face while I sleep.”

“In jail (never was in prison) the lights are never turned off. The COs want to make sure nothing bad is going on in the cells.” —u/kierkegaardsho

“The hardest thing when you come out is the lack of structure. I have so much anxiety because my whole day is not scheduled out.” —u/cachem0n3y

“Whenever someone walks into the room. Been out two months and I’m still like that.” —u/jackofharts94

“Flushing the toilet every 5 seconds.”

“By far the hardest conditioning to break, which I haven’t and doubt I ever will, is the constant pessimism and cautious optimism. You see, when you’re waiting to work your way through court, get a deal, and get sentenced, you will have your dates changed 50 times, hope for certain things only to be disappointed, and any time you are told something hopeful it doesn’t work out.

As a result, I never get excited for something until it actually happens. When my wife told me we were pregnant (I already knew from her symptoms that she was but still, you never know for sure till you take the test), I was obviously happy, but because I’m always cautiously optimistic and rarely show emotion, I couldn’t feel comfortable or excited until I knew that my developing daughter was healthy. Even then, it didn’t really hit me till she was born.

You can apply this to anything especially big events. Getting engaged, planning the wedding, buying a house, ANYTHING. I still hear from my wife how I wasn’t crazy surprised or excited to be having a kid. I was, I actually was the half of the relationship who was dead set on a kid when my wife supposedly could’ve gone either way.

You just can’t get your hopes up or look forward to anything until it is here or has happened. I’ve been home over 7 years now and with my wife for 6.5. She’s truly the catalyst that motivated me to truly change my life and to not give any more of my life to the system, but she’ll never know how happy she makes me because she misinterprets my cautious optimism/realism for pessimism or indifference.” — u/Elrond_the_Ent

“I used to be a social butterfly but after spending so much time keeping to myself I don’t know how to socialize anymore.” — u/88Knuckles88

“Not being able to vote.”

“Putting shower shoes on the toilet.”

“Not wearing shoes in the shower.” — u/the-walkin-dude

“Getting nervous when I hear keys.”

“My buddy forgot this for the first few months after release. It was the funniest thing seeing him just grab shit out the fridge and devour it cold.” —u/Lowesquestions

“I used to sharpen them to make weapons and sell them to the inmates. I still find myself sharpening plastic utensils out of lingering anxiety.” — u/marktwain6522

Being released doesn’t equal total freedom. Are there other lingering habits from lock-up that aren’t on the list? Let us know below.

Note: Some answers have been edited for length/clarity