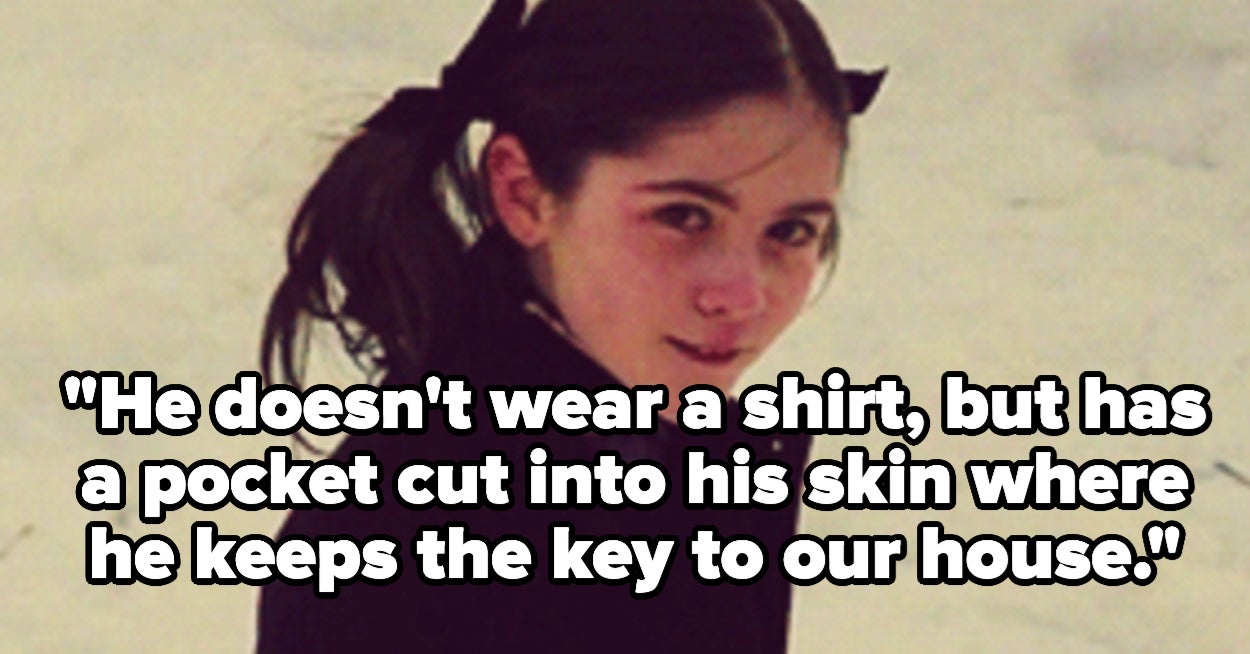 Let’s be honest: Although very cute, kids can also be pretty creepy.

Case in point: A Reddit user recently asked parents to share creepy stories about their child’s imaginary friend, and the responses just might make you sleep with the light on. Here are some of the spookiest:

“His name was Mr. Nobody. He started as the person the kids would blame if one of them forgot to flush the toilet. And then his mythology evolved. For the record, all of this was conceived by three of my kids, who at the time were 6, 5, and 3 years old.

Mr. Nobody has no eyes, no teeth, no tongue, and no nose. He doesn’t wear pants, and leaves the used toilet paper between his butt cheeks so you can tell where he is by his smell. He doesn’t wear a shirt, but has a pocket cut into his skin where he keeps the key to our house. He can be invisible. He’s had a beard since he was a baby. He bites off his fingernails and then drips blood where he walks. Thankfully, been a few years since Mr Nobody has been in our house.”

“During childbirth, I had complications. I almost died, and my daughter actually did. They revived her and we have been happy and healthy since, but since she was an infant/toddler, she’s always looked around like she’s watching something, and just giggling at it. Fast forward to the age of 4, and she told me about her first imaginary friend: Ghosty. All of her imaginary friends are ghosts. To this day, she still talks to them at the age of 7. Unsure if they are real or not, but I’m always sure to be kind to my daughter’s ghost friends and invite them along with us.”

“My eldest son (now 20 years old) had an imaginary friend named Barsie. It was a giant wolf, but could transform into a boy. My wife and I didn’t think much about it until we noticed that my son had broken a plastic butter knife and stabbed quite a few of his stuffed animals. He told us that Barsie had told him to do it, and had even helped. That was when we really got concerned. We took him in to get some counseling after an incident involving a lighter that he found on the ground outside of our apartment. He had tried to burn his baby brother’s favorite toy.

While in counseling, it came to light that Barsie was planning to eat our family and to pee our blood all over the apartment. This was the beginning of my son’s counseling and mild medications. Barsie disappeared over a few months, and we were able to take my son off his medication the following year. He remained in counseling for quite a few years, but Barsie was never mentioned again.”

“My daughter started saying ‘Bob’ before she learned how to say ‘mama’ or ‘dada.’ She would say it all the time, at random times. One time I in the nursery rocking her to sleep when she said it and so I asked, ‘Who’s Bob?’ She pointed up at the corner of the ceiling behind me.”

“Our youngest daughter asked us to keep our bedroom door open because her imaginary friend couldn’t open doors. We laughed it off and figured she was just afraid and wanted to be able to see us or know we were home if she woke up in the middle of the night. The next day, I casually asked what her friend did at night, and she said she liked to stand at the end of our bed and watch us sleep.

We asked how often she speaks with her, and she said she really only likes to talk and come out at night. We asked her to draw a picture of her friend, and the drawing showed really sharp teeth and a lump on her head. We eventually moved, and her friend didn’t come with us, but our daughter said she’d probably find us. That was 8 years ago, and we haven’t heard about her since we moved. I’m hoping she’s lost.”

“My stepbrother had an imaginary friend named Willa Rose. One night, my mom found the dog dead outside. My stepbrother admitted to killing the dog because Willa Rose told him to do it. The next day, he disappeared. Mom told me he went to ‘go live with grandma for a while.’ I am 21-years-old now, and I haven’t seen him since.

My stepbrother once told me what Willa Rose looked like before he got sent away. Apparently, she was a 14-year-old girl who died in 1904. She had no eyes but wore glasses, had paper white skin, and wore a ruffled pink dress with olive green stockings.”

“In the past, I’ve seen things out of the corner of my eye, then glance to see nothing there. Of course I figured that’s just my eyes being weird, and stopped paying attention to those things. Well, my daughter is currently a toddler, and I recently had her sitting in my lap while I was reading a book. I saw something in the corner of my eye as usual, and my daughter quickly looked over. She then stared wide-eyed at nothing, and watched it cross through the room. Since then, it’s happened two more times. She’s not at the point where she can communicate what she’s looking at, but she’s getting there. If it happens again I plan to ask her what she’s seeing.”

“We were walking home from a neighbor’s house when we walked past a drain hole cover. My son stopped and looked down at the rain water and said, ‘There’s a little boy drowning down there, his name is Karikåre.’ The name was a combination between two Norwegian names, Kari (female name) and kåre (male name). My son is only 3 years old, and we don’t know anyone by these names, and I certainly didn’t think he knew what ‘drowning’ meant. He usually doesn’t speak about it anymore, but sometimes he wakes up at night and just points to his Baby Bjiorn and says, ‘Karikåre don’t want to sleep.'”

“When my daughter was 4 years old, she had two ‘friends’ when we lived in a rental house. One was named Samantha. Samantha would insist on staying in my daughter’s room most of time. Then, my daughter would say that Samantha had to go to bed, and we asked where her bed was. She very nonchalantly told us, ‘She leaves the house when it gets dark, and goes out the back door to sleep under the grass.’ We opted not to investigate further.

The other was a man that she called ‘Monstrest,’ or something close to that. He was very nice, according to her, and had long, black hair and wore tan pants and funny shoes with no shirt. She said he was usually ‘covered in blue and white’ and would come, walk around the house and the yard, hang around, and listen to music if we had some on, and would stand in the front yard until morning.

We’ve since moved out of that house and she has not uttered one thing about either friend visiting.”

“I heard my 3-year-old son talking up a storm in his room, pausing as if he was listening to another person answer him. No one was with him, so I asked who he was talking to, and he said, ‘Grammy, she came for a visit.’ Grammy was my husband’s grandmother who died in our house three years before our son was born. We figured she just wanted to spend some time with him. She stayed around for a couple months, then he never saw her again.”

My friend’s son had an imaginary friend named Harles, and he was the cause of several injuries to that kid. He would come up to his dad and ask for a bandage, his dad would ask what happened, and he would talk about how his imaginary friend hurt had him. After a year of them closely watching him, one day it just stopped. Harles never came back.”

“I don’t remember anything about my ‘friend’ other than his name. His name was Jimmy, and he supposedly was a demon. My mom tells me that I would have full conversations with my window frame — assuming that’s where he would stay — and only stop talking when she noticed. She says she’d asked me where Jimmy came from, and I told her he died and came back from the ground. She never asked about him again, and I don’t remember him at all.”

“Apparently, when I was 3 years old, I had an imaginary friend named Ushi (‘cow’ in my native language). He told me to go for a walk at 1 in the morning, try and flood the house, etc. I don’t remember any of this, but it’s kinda creepy.”

“My 3-year-old started talking about her friend Arlo, telling us stuff she did that was funny. We assumed she was talking about a friend of hers from school and made up stories about them playing together, but we came to find out that there was no Arlo at her school. Around this time, it got warmer outside and a new ice cream man started coming around. Our daughter wanted to know why he played music, and we obviously didn’t want to listen to her beg for ice cream six times a day all summer long, so we told her that he’s just the music man and comes by to play music. This was right when lockdown was in full effect, and there wasn’t much to do. She hadn’t hung out with many other kids in the past couple weeks.

One day she heard the ice cream man and excitedly told us he’s not a music man, he’s an ice cream man who sells ice cream. She said, ‘Arlo told me that you lied and said he was a music man, Dad.” We asked where Arlo lived, and she told us she lived in her closet.”

Do you have any creepy imaginary friend stories? Share them in the comments and let’s get spooky.