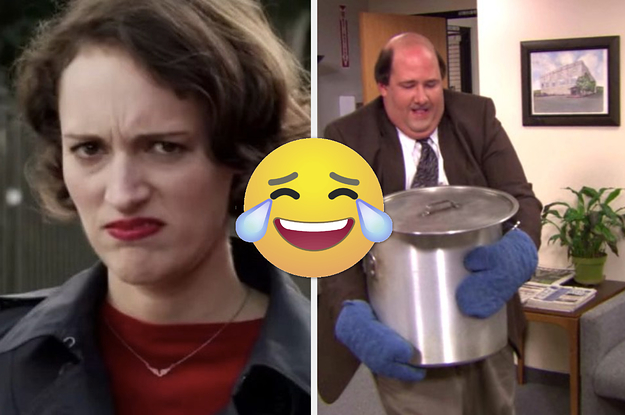 When Kevin brought in some of his famous chilli to work in The Office.

When Fleabag looked absolutely stunning at her mother’s funeral in Fleabag.

When Tom goes glamping in Parks and Recreation.

When Erin accuses Katya of being a sex worker in Derry Girls.

When George Senior taught the kids a valuable lesson in Arrested Development.

When Ann tried to upgrade the town’s water fountains in Parks and Recreation.

When Larry has to fly coach in Curb Your Enthusiasm.

When the Catholic priests get stuck in the lingerie department in Father Ted.

When Mac and Charlie beat up some kids for stealing their bike in It’s Always Sunny In Philadelphia.

When Jen is dating a man called Peter File in The IT Crowd.

When Jerry shaved his chest in Seinfield.

When Dre meets a little girl in the lift in black-ish.

When Jake makes criminals sing the Backstreet Boys in Brooklyn 99.

When Jeremy eats Mummy the dog in Peep Show.

When David Brent did a motivational speech in The Office UK.

When Jay made a new friend in The Inbetweeners.

When Will walks in on his mom and Lisa’s dad in The Fresh Prince of Bel-Air.

When Ilana goes shopping with Abbi at Bed, Bath, & Beyond in Broad City.

And finally, when Ross gets his teeth whitened in Friends.