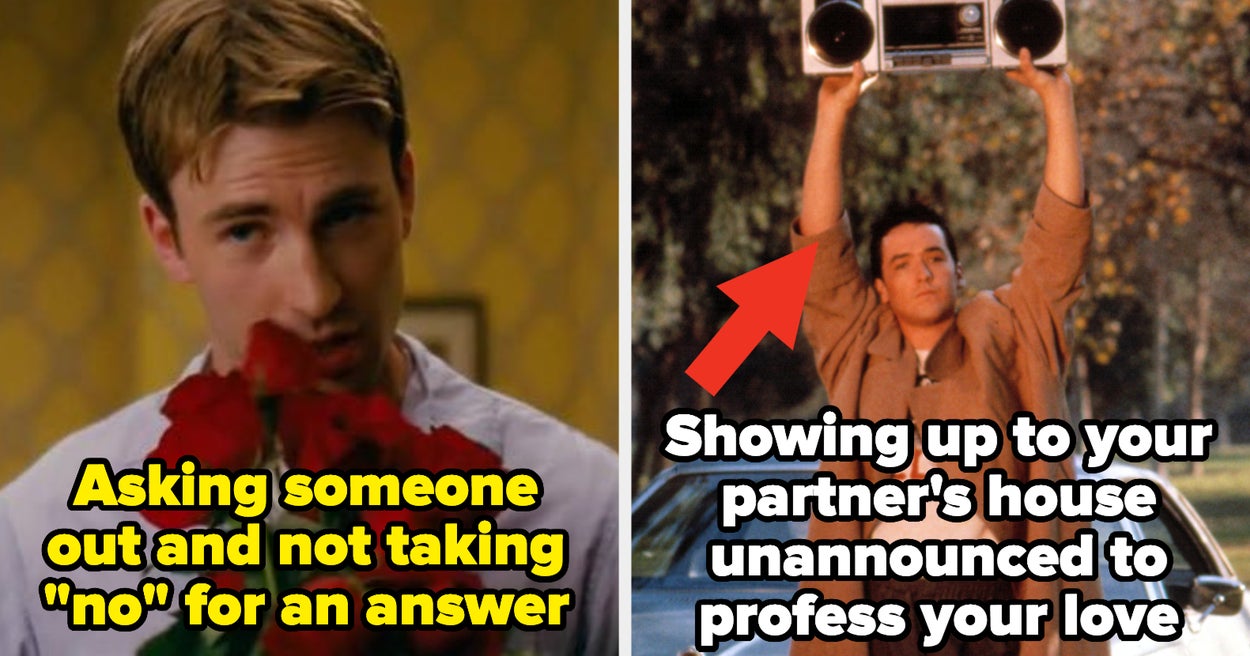 We asked the BuzzFeed Community to tell us which “wholesome” gesture most people believe is romantic but is actually pretty toxic. Here are the eye-opening results.

“Extravagant public proposals in front of strangers or large crowds of people.”

“When you ask someone out and say: ‘I won’t take no for an answer.'”

“Um, you’re not ‘dedicated’ or ‘loyal.’ You’re a creep who doesn’t understand boundaries, and this person isn’t interested in you.”

“Showing up to your partner’s home or place of work unannounced to profess your love.”

“It’s just clingy, at times possessive, and so uncomfortable for anyone else who happens to be there. Only do the surprise visit thing if your partner has actually expressed they’d like it.”

“And when you’re professing your love to someone and you tell that person to be quiet and listen until you’re finished.”

“Spending all of your time together and accompanying your partner everywhere.”

“I had an ex who always asked me to stay over, hang out with him and his friends, etc. One day he invited me to go out for a drink with him and his friend and when I asked him why, he said, ‘Because then I know you’re here with me.’ It was then I realized he wasn’t being sweet. He was being toxic because he wanted to know where I was at all times.”

“Making extravagant gestures to ‘win’ your ex back.”

“It screams emotional manipulation. You’re holding your ex captive because if they turn you down, then *they’ll* look like an asshole when *you’re* the one who deserves judgment. Nothing romantic about it.”

“Men swooping in to ‘save the day’ and help women when they’re struggling with a problem.”

“Two people with totally opposing views will overcome their differences because of their love.”

“In reality, if you’re polar opposites, you are eventually going to clash over your differences.”

“Giving warm compliments to men (in straight marriages) for spending time with their kids.”

“This isn’t something we tend to compliment women for and sometimes we end up affirming the idea that men get to opt out of things like that.”

“Buying your partner gifts after you have a big argument.”

“Telling someone you just met how close you feel to them.”

“It is often displayed as meeting one’s soulmate at the beginning of a wholesome love story, but healthy connections take some time to form and so many people telling me stuff like this turned out to be the most toxic people I met. So that‘s a major red flag now.”

“Being in constant communication, especially in the beginning of the relationship.”

“It creates this atmosphere of constant validation and doesn’t let you become secure in the relationship. I’ve had friends think that partners/people they’re dating have suddenly lost interest just because they didn’t get a text back in a few hours.”

“Making huge life decisions and presenting them to your partner as a surprise.”

“Cheering your partner up with positive compliments on a consistent basis.”

“Telling your partner, ‘I trust you but I don’t trust them.'”

“Get out of here with that noise. Jealousy should never be a thing and hanging out with friends shouldn’t warrant jealousy.”

“Asking your partner’s father’s permission to get married.”

“Telling your partner they’re perfect. Literally saying ‘you’re perfect’ objectifies them as a person, as no human is actually perfect.”

“Your partner threatening to physically harm anyone who tries to hurt you.”

“I absolutely hate it when people say they’re going to hurt somebody to be ‘romantic.'”

And “expressing to your partner, ‘You’re my other half.’ No, I don’t want to be objectified to being your half, because we need to be our own separate people.”