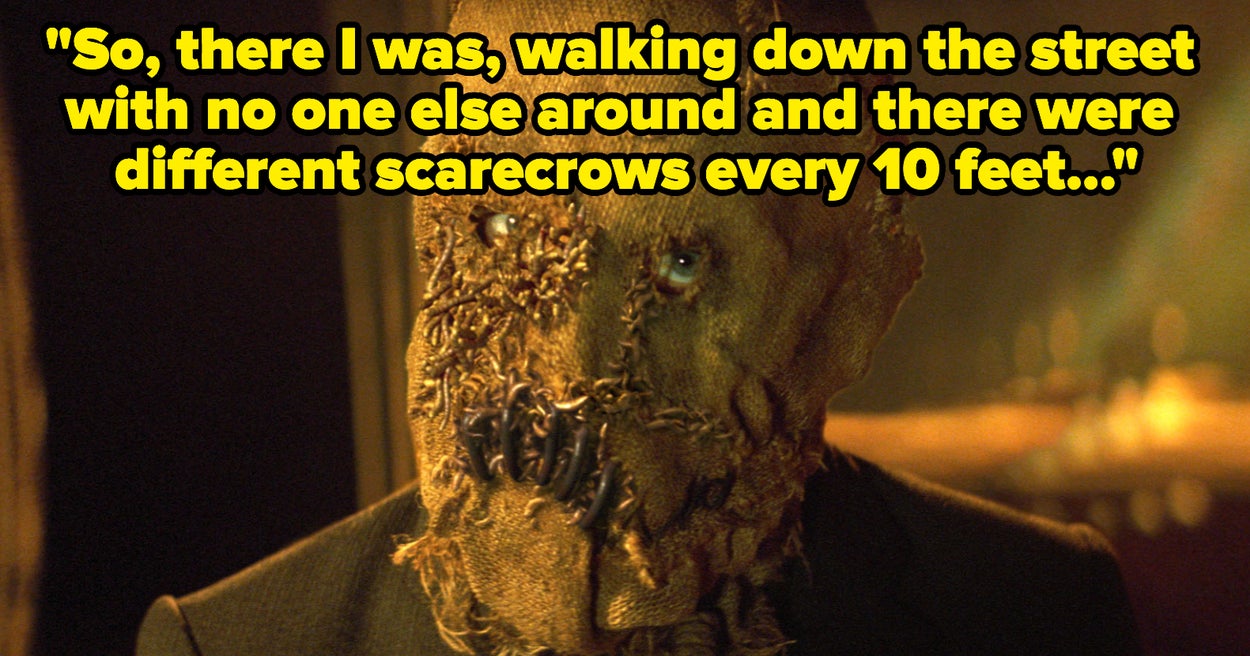 We’ve all had that one horror movie moment in our real lives — the one that made us say, “Oh heck no, I’ve seen this scene before and I’m not trying to be part of THAT cast!”

Well, this week when redditor u/MisterSnowman69 asked, “What was a moment in your life that felt like a horror movie scene?”* people were quick to share their own personal IRL horror movie moments.

So, with that in mind, here are just a few of the most terrifying true stories shared:

“I was exploring an abandoned asylum and got the scare of my life when I suddenly saw a scary-looking person inside one of the rooms staring at me without moving. Turns out some joker had left a cardboard cutout there.”

“My friend and I got lost late one foggy night in the Italian countryside. There were rats all over, and every once in a while we heard someone scream. I’ve never been more sure I was about to get murdered than I was that night.”

“I was cat sitting and it was a first time job with this new client. I went up to the 2nd floor to fill their water bowls up there. It was nighttime. I got up the stairs, and — before I turned the lights on — I saw like eight heads facing me, silhouetted against the windows. I hit the lights, and…mannequins. The wife designed clothes and that was her studio. I almost went into cardiac arrest!”

“When I was about 13, I had to stay home alone every day after school while my parents worked. One day, there was a knock at the door. I didn’t answer (obviously) because I was just a kid, but whoever it was started slowly trying to turn the locked doorknob. I called my mom after they ‘left’ and — while I was on the phone with her — the back door started getting kicked down. As I was frantically trying to tell her I needed help, the phone call dropped and I had no idea what else to do, so I just had to run. Luckily, we had an alarm system, so when it started going off, it scared them away. I was able to run to my neighbors house for help, but to this day we still have no idea who it was!”

“I got T-boned by a fully-loaded gravel truck in my car, woke up several hours later after two surgeries in a hospital 200 miles from my hometown. I had been lucid — but not conscious — for hours and I was in the middle of a sentence when I came to. It felt like time-traveling or teleporting, and sometimes I still get this uneasy feeling that I left behind a different world than I woke up in.”

“I was driving home on back country roads at midnight in heavy fog. Like, ‘can’t see 10 feet in front of you thick’ kind of fog. Suddenly, I see an all-white silhouette run in front of my car. Every hair on my body stood up and I immediately thought ‘Oh god, oh fuck, it’s a fucking woman in white and I’m going to fucking die.’ Nope, turns out it was just a drunk person who drove into a nearby ditch.”

“My mom is quite the sleep-talker, but it’s usually pretty short and incoherent when it happens. However, one night when I was a teenager, I woke up to her screaming the ‘Hail Mary’ prayer (my bedroom was across the house AND upstairs). It was pretty difficult to get back to sleep after that one.”

This series of coincidences:

“When I was 12, my parents went out for dinner and left me home alone. We lived out in the country on a private road with only three other houses, surrounded by cow fields and wooded areas.

I went into the the kitchen and glanced out the window towards the trees and, in the fading light, I could see a person walking slowly through the woods. They were wearing all black, moving slow, and appeared to pause behind trees. I froze and just watched them. This was before cell phones but I suddenly remembered that my mom had left the number of the restaurant by the living room phone. I made my way towards the living room, trying to watch this stranger in the woods.

Just as I entered the living room, all the lights in the entire house went out. By this time, it was nearly dark outside. I started openly sobbing as I heard a weird, ‘boom’-like noise. That was it, I ran to my parents room, hid under their bed, and sobbed. That’s where my mom found me hours later.

Well, turns out the ‘stranger’ in the woods was actually just a stupid cow that had busted through a fence, the lights going out was from an accident a few miles away, and the ‘boom’ was the pilot light in the gas stove. Man, I have still never been that scared in my life, though!”

“So I was eight at the time and it was late and I was going to the bathroom. It was rather bright outside, despite the late time. I’m sitting on the toilet, playing with the curtain, and it suddenly came up just enough for me to see a shadow standing right outside of the window. I screamed and my mom came running in. I told her there was someone standing outside the bathroom window. My mom threw open the curtain, opened the window, ready to fight this guy outside the window — and nope, it was a fucking bear! Window was promptly shut and I’m quickly ushered out of the bathroom.”

“I was 10 years old and part of the choir at my local church. In the evenings, the church also acted as an amateur dramatics venue for various performances. This one play they were doing involved having a choir, which was handy, as the church knew just how to get hold of some good extras. So I had to play this part for late evening shows, but because the main entrance meant walking past the paying customers, I had to enter via the back door of the church — through the graveyard. It was like a horror movie trope in real life.

The first night, I got a few meters into the graveyard when my shitty light went out. This was the days of rubbish filament bulbs that were delicate and sucked batteries dry fast. I immediately convinced myself something was creeping up behind me in the dark, so I started running. I ran at full speed into a low stone table-type grave, hitting both shins, then face-planting hard into the top of the grave. Adrenaline is amazing — I didn’t feel a thing. I got straight back up and ran in a full circle until I came out the other side of the church and back into the street light.

I stood there panting before I realized I needed to go back around to get to the door correct. I decided to say fuck it, noped out of there, and just went home instead. The adrenaline wore off on the walk home, then it hurt.”

This creepy as heck house:

“When I was 12, I spent the weekend at a friend’s house near the woods. We went for a walk and found (what we thought was) an abandoned house. We went inside and everything was dirty, but nothing was really scary — until we got to a dark room where there were just dozens, maybe even hundreds, of scissors hanging from the walls. We’ve both never run so fast in our lives.”

“The town where I went to college had a scarecrow building contest a few years ago, and had the ones entered all lined up along the main road. There were some ‘traditional’-looking ones, some scary-looking ones, and some with themed outfits like football players or rock stars.

One day, I was walking down the main road to get something from the gas station. There was no traffic, and hardly anyone else outside. Suddenly, this really thick fog rolled in — much thicker than what they normally got in that town. So, there I was, walking down a street with no one else around, it was quiet, and there were different scarecrows every ten feet, both behind me and in front of me. Nothing happened, but it was truly like something out of a Stephen King book.”

“I was sitting in the parking lot outside of work. I saw someone leave their car and walk inside, and — when the door closed — I noticed this super creepy-looking person sitting in a nearby vehicle. I watched them for a LONG time, but they didn’t move at all. I could only make out their silhouette in the reflection, but they just gave off an unnerving vibe. After about five straight minutes of getting more and more nervous about this creepy person sitting in a vehicle near me not moving, I finally mustered up the nerve to walk past them and go inside. That’s when I realized it was just that someone had a life-size sticker of Jared Leto as the Joker on the back of their truck window and I felt really stupid.”

“My husband and I were visiting Boston, walking around sightseeing, and I had to pee so bad. The nearest place was some kind of government courthouse building, so I walked in, asked for directions to the nearest loo, and was pointed to the downstairs level. Great! I waddled/sprinted down the stairs, and suddenly I’m in a hallway that looks like some 1960s office with a horror movie twist. The ceiling was low, the lighting was dark and flickering, and the whole place felt eerie.

Even so, I had to pee. So, I found the restroom and it looked like a place a few people may have been murdered in, but at this point I don’t care. My bladder is done. I pop a squat and — just as I started — all of the lights go out. And I mean OUT. There wasn’t even a single window. I couldn’t see my hand in front of my face. If I hadn’t have already been peeing, I would’ve peed myself. Trying to be rational I think, ‘It has to be on a motion sensor,’ so I start frantically waving my arms in silent, dark dread as I realize these lights aren’t going to come back on. Then my imagination took over and I started thinking someone was probably sneaking in to kill me.

Somehow I managed to finish, stand up, reach for my phone, and activate the flashlight — all in the dark. As I reached for the handle, the lights came back on. I am still to this day100% sure that bathroom was haunted.”

And finally — this holly jolly horror:

“When I was young, I was walking through a pine forest. The whole time, I could’ve sworn I kept hearing a chainsaw in the background. The sound got closer and closer, then I finally turned around and a big-ass dude with a chainsaw was right behind me. Turns out, I was at a Christmas tree lot.”

All right, you’ve read their tales of terror, but now it’s YOUR turn! What’s a moment you experienced that 100% felt like something straight out of a horror movie? Share your story in the comments below!

Note: Some responses have been edited for length and/or clarity. H/T Reddit.