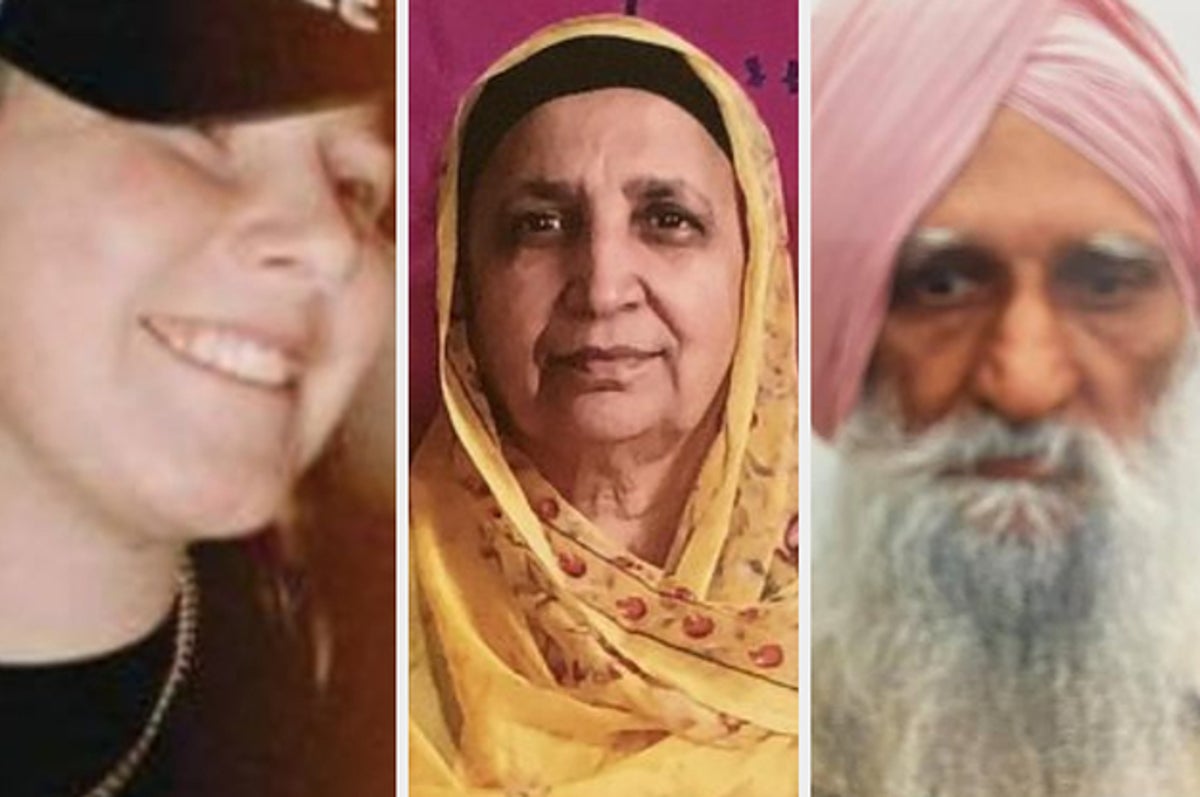 
Eight people were killed in the shooting late Thursday at a FedEx facility in Indianapolis, ranging in age from 19 to 74.

All were employees at the facility, with some just arriving for the 11 p.m. shift. Four of them were members of the Sikh community, which local leaders have said must be factored into the ongoing investigation of the shooter’s motive. The 19-year-old, who previously worked at the FedEx facility, killed himself after opening fire in the parking lot and inside.

It was the latest in several mass shootings over the last month. So far in 2021, at least 5,530 people have died from gun violence, not including those who have died by suicide, according to data from the Gun Violence Archive.

A vigil is planned for Sunday night on the steps of city hall for the victims. Here’s how friends and family are remembering them:

Amarjit Sekhon, 48, leaves behind two sons and her husband. Her brother-in-law, Kuldip Sekhon, told the Associated Press that she started working at the FedEx facility in November and “was a dedicated worker whose husband was disabled.”

“She was a workaholic, she always was working, working,” he said. “She would never sit still … the other day she had the [COVID-19 vaccine] and she was really sick, but she still went to work.”

Sekhon’s 22-year-old son Diljot Sekhon echoed this sentiment about his mother to the Indianapolis Star, saying, “She worked countless hours a week just so that she could provide food for everyone in the house. She did everything she could for her two kids and her husband.”

His mother had been helping to support her family since she came to the US, he added.

“She’s been trying her best,” he told the Star. “And that’s exactly how she died; she was going to work.”

Fifty-year-old Jasvinder Kaur was a relative of Sekhon’s. According to the Washington Post, Kaur didn’t have her driver’s license, so Sekhon drove her to work every day. The two of them were shot and killed in the FedEx facility’s parking lot when they arrived to work their 11 p.m. shift.

Kaur immigrated to the United States from India three years ago to be closer to her daughter, the Post reported, and still has a 26-year-old son in India who she was hoping to bring over to the US. Those plans were postponed due to COVID-19.

Amarjeet Kaur Johal, 66, was a mother and grandmother as well as a member of the Sikh community in Indianapolis. Johal’s granddaughter tweeted about the loss of her nanjii, saying, “She was gonna work a double so she could have the day off today but decided to just grab her check and go home.”

“She still had her check in her hand when they found her,” the tweet continued. “what a harsh and cruel world we live in.”

The granddaughter also tweeted a photo of Johal, writing, “you deserved so much better than this.”

“She just celebrated her 66th birthday like yesterday and today was her granddaughter’s birthday. Life is so short man,” she tweeted. “Hold your family close because the world is twisted. Cherish each and every moment and don’t hold any hate in your heart. Fill your life with happiness and irreplaceable memories.”

Jaswinder Singh, 68, had only worked at the FedEx facility in Indianapolis for a couple of weeks before he was shot and killed while he was attempting to collect his first paycheck. One of Singh’s nephews who spoke to the Washington Post under the condition of anonymity said that Singh immigrated to the United States eight years ago and recently took the FedEx job because “he was bored at home” and he knew other Punjabi immigrants were employed there.

“They knew a lot of people who worked there. They just carpooled together. It was a decent-paying job. A lot of older Punjabis worked there,” the nephew said. “He was always positive, always nice and I never saw him angry. He would randomly come over to say hi.”

Nineteen-year-old Samaria Blackwell, who worked at the FedEx facility for two months, was described by her family as “a fun-loving, caring daughter” who was a straight-A student as well as an athlete.

“Samaria was tenacious in everything she did, from playing basketball and soccer to being a lifeguard for Indy Parks. On the court or the soccer field, she had a tough game face, but that quickly turned to a smile outside of competition,” Blackwell’s family said in a statement. They also wrote that the teenager was the “baby” of her family and looked up to her older siblings and that she “dreamed of becoming a police officer.”

“Although that dream has been cut short, we believe that right now she is rejoicing in heaven with her Savior,” the statement continued. “On this side of heaven we grieve, but not as those who have no hope, for we recognize Samaria’s life has only just begun.”

The Blackwell family also set up a GoFundMe for Samaira’s funeral expenses.

Karli Smith, another 19-year-old who was killed, had only been working at FedEx for two weeks prior to Thursday’s shooting. Born and raised in Indianapolis, Smith graduated from high school in 2020. The Indianapolis Public Schools released a statement saying Smith “was known as a hardworking and dedicated student.”

“While at Crispus Attucks, she played on the softball team and was loved by her teammates and coaches. She also played basketball and volleyball during middle school at Daniel Webster,” the statement said. “Administrators, teachers and classmates remember Karli for her sense of humor that often generated smiles and laughter. Karli was a bright light wherever she went. She will be dearly missed by all throughout IPS who knew and loved her.”

Smith’s family also paid tribute to her on Facebook. Her sister Dominique Troutman wrote: “I miss you sister. I love you man, words can’t even explain how I feel rn bro I’m so hurt behind this. I’mma forever love you and you never will be forgotten.”

Matthew R. Alexander, 32, was beloved by his colleagues, according to the Indianapolis Star. Former FedEx driver Albert Ashcraft told the paper that “everybody liked” Alexander, especially because when people brought in doughnuts, he made sure that the drivers got some too.

“He was a great kid. He loved to play golf. Had a big heart — always had a smile on his face,” Ashcraft told the Star. “Whatever it took to make a truck driver happy, that’s what he did. He was just not the ordinary dispatcher. He was a good kid. Thirty-two years old, you know, got shorted out of life as far as I’m concerned. It’s really sad.”

Butler University, where Alexander attended school, also tweeted about the tragedy on Saturday.

“The Butler community is mourning the loss of Matthew Alexander, a former student who was killed tragically along with seven others at the FedEx facility in Indianapolis. We want to extend our deepest sympathies to Matthew’s friends and families during this time of great sorrow.”

John “Steve” Weisert was the oldest victim at 74 years old.

He took the job as a FedEx package handler after retiring as an engineer to pay off some bills, his wife, Mary Carol Weisert, told WTHR. The couple would have celebrated their 50th wedding anniversary this year.

When Weisert didn’t return home on April 15 around the time he typically does, his wife said she felt “panicked.”

“I just immediately [felt] horror, terror, horror, fear, shock,” Mary Carol Weisert told WTHR. “I mean, you know, I don’t know how else to describe it. Actually it bothered me physically. I started shaking like a leaf.”

According to the Washington Post, Weisert was a first lieutenant in the Air Force. His wife also told WTHR that he went on to have a career as a professional engineer and four and a half years ago, he took the job at FedEx. He was planning on retiring from his job at the facility in six weeks’ time.

The couple had both recovered from contracting COVID-19 earlier this year and were fully vaccinated, excited to see their daughter in Seattle.

“It was miraculous he was able to survive COVID,” their daughter-in-law Jenny Kriger told the Post. “Yet, this ended up taking him.”