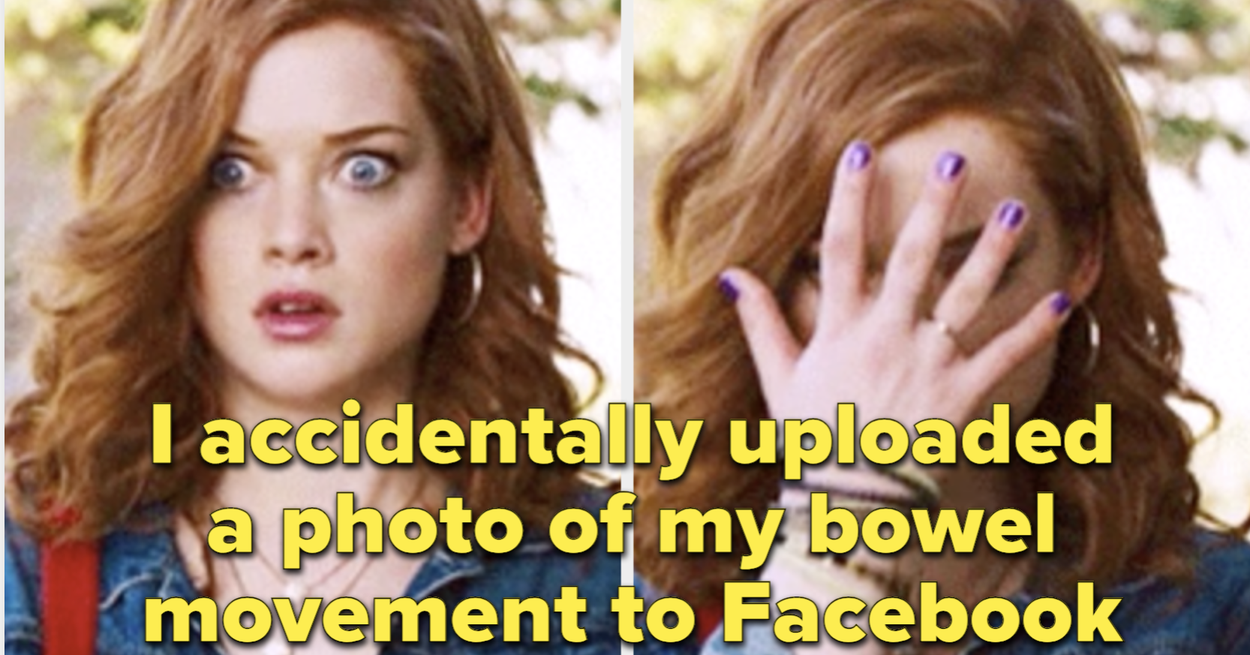 We recently asked members of the BuzzFeed Community to tell us a cringingly embarrassing time they posted something online they most definitely did NOT mean to post, and the responses were a treasure trove of secondhand embarrassment:

“I was concerned about the way my bowel movement looked, so I sent a photo of it to my dad (who is a doctor) through Facebook since he has to turn his phone off at work because of the monitors on the hospital floor. Well, I accidentally did not send it privately but posted it as an update.”

“My sister-in-law (a photographer) took pictures of the birth of my son, then posted some of them to Facebook. My dad commented and shared, my family commented and shared, etc. Turns out in one of the photos my entire boob was just hanging out and neither my SIL nor dad noticed. It was up a good few hours while I was in recovery. Sigh.”

“I got high on Ambien (I take it for help with sleep) and accidentally posted a video of me falling asleep.”

“Searched the name of the guy I fancied from work on Facebook so I could show him to my housemate. Accidentally posted his name in the status box and just had his full name as my Facebook status (we were friends on Facebook too). In his mad panic, my housemate jumped up from the sofa and knocked the internet cable out of the laptop (showing my age!) and we had to plug it back in and wait for the laptop to connect to the internet before I could delete the status!”

“He says he never saw it, but I don’t believe him. He’s my husband now, so it worked anyway!”

“This isn’t too bad in the grand scheme of things, but I accidentally posted a picture of a ladyfinger with the caption ‘just bought a single ladyfinger, so excited’ on my public account instead of my private one and left it up for an hour or two without noticing. Very embarrassing that my old high school classmates saw that and now know that the highlight of my week was buying one (1) delightfully crunchy cookie.”

“I was taking *saucy* pics in my underwear…I didn’t fully understand Instagram yet, but I wanted to put a cool filter on the picture, so I got on Instagram and saved the filtered photo, not knowing that I had actually posted that shit. It was literally in people’s timelines. Two people commented on it. I’m honestly scarred for life.”

“My inbox flooded with congratulations messages after my phone pocket uploaded photos into Instagram stories. The photos were ones I had just taken wedding dress shopping for my best friend 😬.”

“When I was 20, Snapchat was just starting to be a ‘thing.’ I’d been flirting with a guy for a while on it, got drunk, and thought ‘he’d definitely want to see my boobs.’ Hit send and passed out.”

“The next morning, my boss called to tell me I’d publicly posted my lady lumps on my Snap, and as I was beyond drunk, it was up for six hours. I don’t drink anymore.”

“When I was in college, there was some website where people could ask you questions, anonymous or not. Everyone had theirs posted on Facebook, so I decided to play along. I got a few questions, but in order to make myself seem a little more interesting, I decided to submit questions to myself. But I forgot to click the ‘anonymous’ button. They were up for a few hours before I caught it. One person asked, ‘Why are you asking yourself questions?’ Still makes me cringe.”

“I posted literally all of my nudes to my VSCO feed once, but it paid to have no followers when I noticed a day later and took them down.”

“After a weekend with my beau, I meant to send him a seductive Instagram pic (with nipple) to his DMs. I didn’t know it posted in my stories until my brother replied thinking I had been hacked! Mortified.”

“I’d just picked up about a half ounce of weed and bought a ton of Wendy’s food. I posted a picture of the weed, the Wendy’s, and my gigantic bong to my private ‘Finstagram’ page, then proceeded with my evening.”

“An hour later, I realized that people from my high school were liking my picture, which was strange because my finsta was obviously private. Turns out in my, um, stupor…I had posted it to my regular Instagram.”

“Years ago, I was reading a BuzzFeed article about people’s craziest awkward sex stories, and somehow accidentally posted the article to my Facebook timeline. At that time, I’d stopped using Facebook, so I didn’t catch it. Years later, I logged back onto Facebook out of curiosity to see that was the last thing I left for everyone to see…all these years.”

“I still have nightmares about the time in high school I accidentally uploaded a bra and undies selfie to Facebook from my flip phone. This was back in 2008 and we still had limited minutes and internet access on our cellphones. Oh God I wanted to die right then and there.”

“I did not actually post it, but I was a second away from hitting upload. I was at the birthday party of my boyfriend’s daughter and there was a person making those huge soap bubbles. My boyfriend snapped a really good picture of me with the bubbles so I wanted to post it on Facebook. He was sitting right next to me when I was about to post and noticed I’d checked two pictures to upload from my phone. He told me to double-check, and yup, the other picture was of…his cock.”

“I was on Facebook and this person I was barely friends with posted something emotional and kind of suicidal, and I replied trying to be supportive and uplifting and funny…but I made a typo. I meant to end my comment by saying ‘Guess you can’t die!’ but I had actually said, ‘Guess you can die!’ I came back to my phone later and she wanted to fight me. I was traumatized.”

“I tried to send a drunk selfie on WhatsApp and somehow made the selfie my profile picture. It remained my profile picture all night and my boss (who is a friend of mine) screenshot it and flashed it to me while I was in a meeting the next day. Absolutely mortified.”

“My mother, who I was not speaking with (at the time), had apparently found herself a boyfriend online and meant to send him a risqué photo of her breasts via messenger but instead posted the picture on her Facebook page for the whole world to see. I then had the pleasure of texting her to kindly ask her to take her boobs off of Facebook.”

“I could almost hear my computer-illiterate mother screaming out in horror as she not only realized what she had done, but also that I knew. Want to know the best part about all of this? This all happened around Christmas time, so that year I sent her a Christmas card of her boobs, wishing her a Merry Christmas and all the breast to her in the new year!”

Did you post something embarrassing online you definitely didn’t mean to? Let us know in the comments!