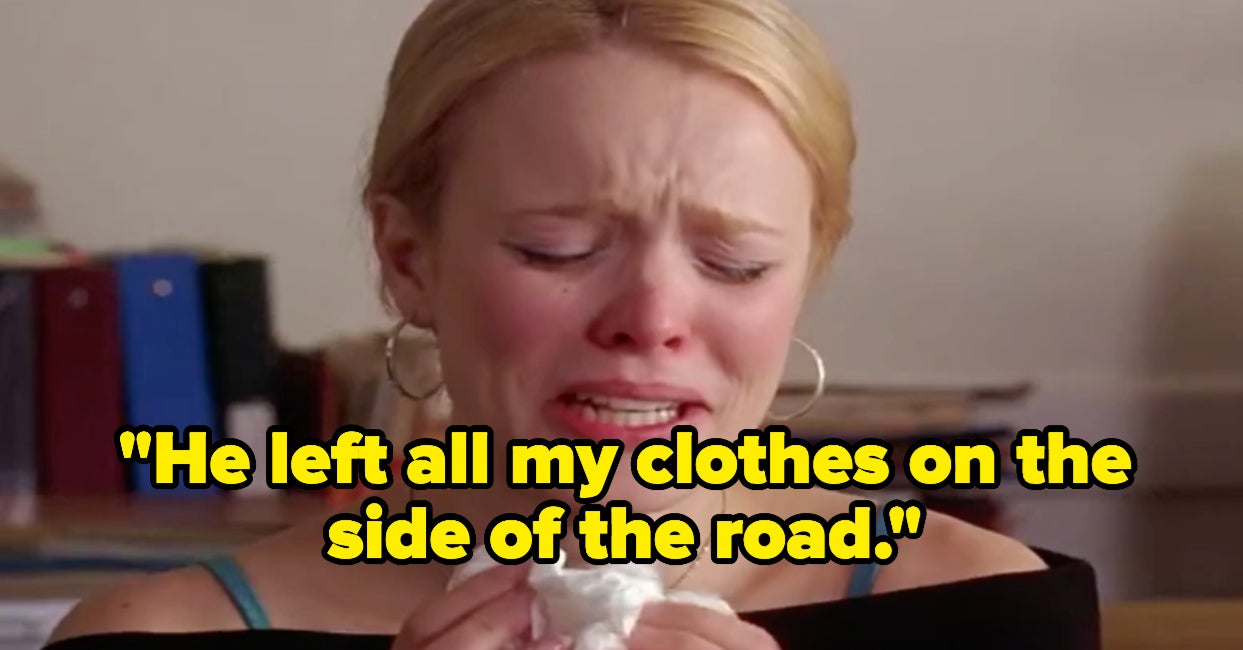 Breakups can be ROUGH. While some relationships end with a clean break, others go down in flames.

We asked members of the BuzzFeed Community to share their pettiest breakup stories. Here are the shocking results:

“I had given him shoes for his birthday and wrote, ‘I’m so glad you walked into my life!’ on the box. We broke up a few months later and he gave the shoes back and said, ‘Have fun walking out of my life.'”

“We had been arguing a lot leading up to this Halloween party because I was convinced he was having a thing with another girl. But, we had a few laughs about the idea of dressing up as salad vegetables together at this party while everyone else would be going for a sexy look. The night of the party, he turned up as sexy zombie Danny from Grease holding hands with the other girl dressed as zombie Sandy. That’s how he told me it was over. I was dressed as a carrot.”

“He left all my clothes on the side of the road that I used to pass on my way to work. I didn’t even realize they were my clothes for a few seconds, and I even chuckled until I recognized my hoodie.”

“This guy I had been talking to for a month told me he was ending things because he had a dream that I was the devil. He said it felt like Jesus was trying to give him a sign not to be with me. I have no fucking clue.”

“My high school boyfriend simply changed his Facebook status from ‘in a relationship’ to ‘single.’ We didn’t go to the same school and I had no idea until someone pointed it out to me halfway through the day. We were only together for four months, but even 15-year-old me realized how rude that was.”

“While still inside of me, he finished and said, ‘I don’t think this is working.’ We had been dating for eight months.”

“I was told, ‘You’re more Toms and I’m more Nike.’ Yes, he used the shoes we were wearing as a comparison to our breakup.”

“On my birthday, my ex told me that he needed time to think about whether he wanted to be in a relationship. The next day, he announced his engagement on Facebook to his ex-girlfriend. Apparently he’d been seeing her again behind my back. They got married a couple of months later. Needless to say, the marriage barely lasted a year. After the divorce, he shamelessly messaged me to see how I was doing. I ignored him!”

“I broke up with a guy in high school five days after he asked me to be his girlfriend. The reason? We made out for the first time and it was awful. It was a lot of teeth and all I could taste was the chicken nuggets he had for lunch.”

“My ex-boyfriend dumped me and said, ‘God doesn’t want us to be together.’ What a coward. Tell me the real reason!”

“Over Snapchat. They sent me a picture of someone else with the caption, ‘I’ve found the love of my life, sorry,’ and then they blocked me on everything.”

“He dumped me on the day I graduated from medical school — after sitting through the entire ceremony. He said it was because I was doing what I wanted to do and he was too scared to move somewhere new. The photos from the day were ruined and it was such a negative way to end an amazing achievement.”

“He hooked up with my best friend, so I invited them both to go hiking with me about an hour away (and I drove). As soon as we got to the trails, I ‘forgot’ my sweater in the car and went back to get it. I just drove home and never spoke to either of them again. They got a ride, calm down.”

“I got an invitation to his wedding.”

Finally: “I didn’t mean for this to be petty, but I was 16 and didn’t know what to do. I made him a friendship bracelet, gave it to him, and said, ‘Because I think friendship is all we should have between us.'”

What’s your pettiest breakup story? Drop it in the comments below!