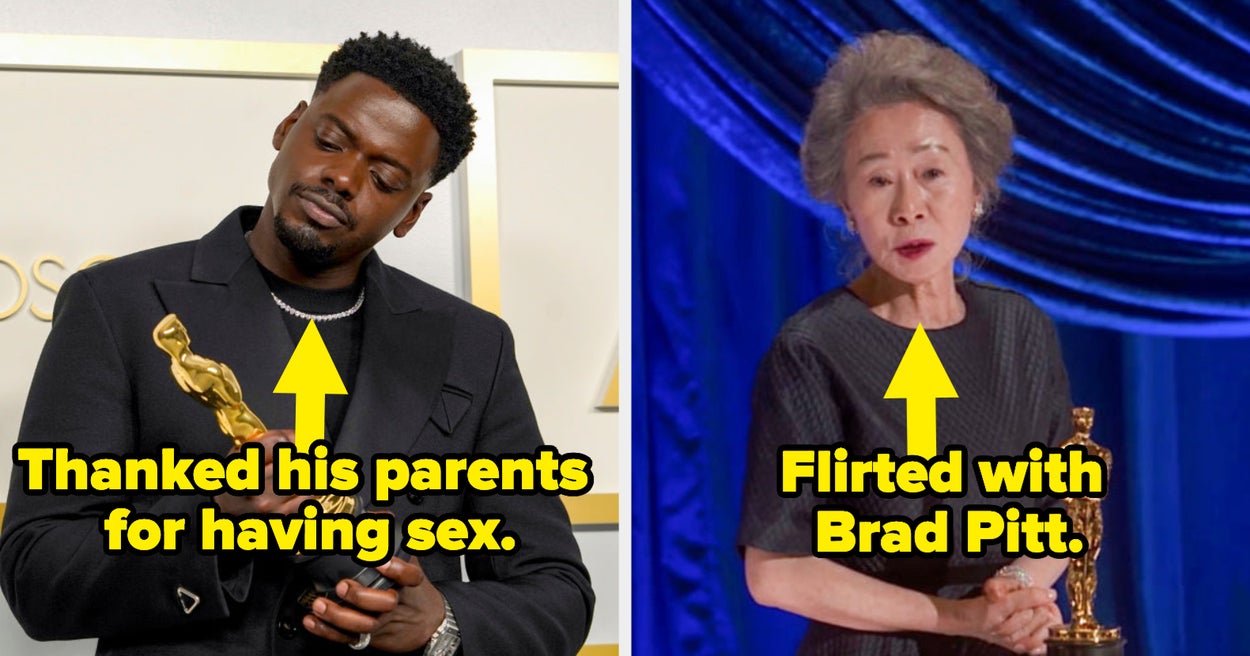 Many of Hollywood’s brightest stars were strutting their stuff on the red carpet in some truly fantastic looks:

And plenty of beautiful power couples were out in full-force, just to make me feel bad about my love life:

The show itself took place in several locations — some virtual — with the main location being a ballroom in Los Angeles’ Union Station:

Regina King opened the show with a powerful speech, referencing the verdict reached last week in the trial of George Floyd’s murder and its impact on America:

Then, the first award of the night was for Best Original Screenplay, which went to Emerald Fennell for Promising Young Woman — who was genuinely shocked and unprepared in the most charming way possible:

Next up was Best Adapted Screenplay, which went to Florian Zeller and Christopher Hampton for The Father — a film that was adapted from Zeller’s 2012 stage play, Le Père:

Laura Dern took to the stage in the fluffiest damn dress I’ve ever seen in my life to present the award for Best International Feature Film, which went to Denmark’s Another Round:

And then we got Best Supporting Actor — which went to Daniel Kaluuya for his role in Judas and the Black Messiah. He gave a wonderfully emotional speech, ending with a hilarious “thank you” to his parents…for having sex and creating him:

And his mother’s reaction was, well…in a word? Iconic:

Bong Joon-Ho presented the award for Best Director remotely from Seoul, which went to Chloé Zhao for Nomadland. She made history as the first woman of color (and only the second woman ever*) to win the award:

Ma Rainey’s Black Bottom took home BOTH Best Costume Design and Best Makeup and Hairstyling — the latter of which made history, as Mia Neal and Jamika Wilson became the first Black women to win the award:

Brad Pitt (and his ponytail) presented the award for Best Supporting Actress, which went to Youn Yuh-jung for her role in Minari. When she took to the stage, she looked at her presenter and simply said, “Mr. Brad Pitt…finally.”:

The “In Memoriam” was introduced by a stunning Angela Basset, though the slideshow itself felt…speedy:

Then — in one of the more playfully chaotic moments of the evening — Questlove decided to play a music-based trivia game hosted by Lil Rel Howery. The whole segment gave off huge “awkward family wedding” vibes, and I’m obsessed with it:

Anyway, Andra Day swore on live TV and her mic was promptly muted….

…there was a mini-Get Out reunion between Howery and Kaluuya….

…And Glenn Close continued to be an absolute icon by doing “Da Butt” without hesitation when asked to:

Tyler Perry was honored with the Jean Hersholt Humanitarian award, and gave an incredibly moving speech about kindness, compassion, and “refusing hate”:

Then, Best Picture was presented — yes, you read that correctly, it was presented…NOT last — by Rita Moreno, and the top honor went to Nomadland:

Finally — in maybe the single most confusing ending of all time (and I’ve seen Donnie Darko) — Anthony Hopkins won Best Actor for his role in The Father, wasn’t there to accept the award, and then the show-runners abruptly ended the show, because it was running long:

So, uh, yeah. That was the 2021 Academy Awards. It was…somethin’ else, lemme tell ya! Be sure to check out the full list of the night’s nominees and winners here, and more of our 2021 Oscars coverage here!