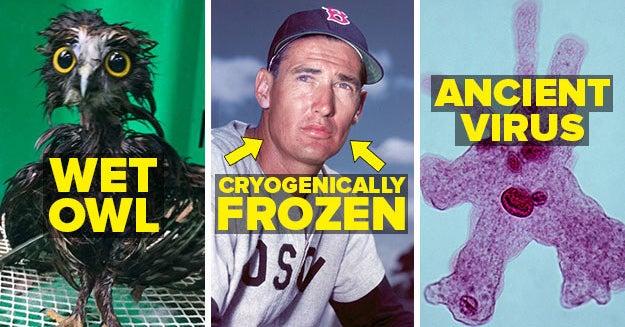 Before you continue reading, I want you to know that this post *might* contain a bunch of facts you’ve already read.

Some context: I write a weekly series, published on Saturday mornings, where I round up a bunch of cool facts I learned that week. Then, at the end of every month, I take everything I learned and put it all into one convenient place for your reading pleasure — and that’s what you’re reading now. Here’s the one I wrote in March.

The following facts are from:

The Week of April 3

The Week of April 10

The Week of April 17

The Week of April 24

SO, without further ado, here are 92 Things I Learned In April™️:

Oh, and a quick warning: Number 11 on this list features a photo that people with trypophobia and arachnophobia might find disturbing.

The Perseverance rover is getting a lot of press these days, but the Curiosity rover is still working hard on Mars. In March, it captured some clouds drifting across the martian sky:

Unlike other bird species, owls aren’t really built to withstand lots of moisture:

The USS Johnston — a US Navy destroyer that was lost in combat during World War II — was recently rediscovered at a depth of 21,000 feet (6400.8 meters) in the Philippine Sea, which is equivalent to four miles (!!), making it the deepest shipwreck ever recorded:

Fossil records show that magnolia trees are at least 60 million years old. They’re so ancient, in fact, that their flowers evolved to be pollinated by beetles and flies because bees, butterflies, and moths hadn’t existed yet:

This amazing photo depicts a 162-year-old portrait of a Civil War soldier in stunning HD. It was restored and colored by Adam “A.B.” Cannon, a photo restoration and enhancement specialist based in Illinois:

Up until the late 1980s, it was widely believed that babies don’t feel pain. So common was this belief in the mainstream medical community that many infants who were undergoing surgery weren’t given any type of anesthesia or pain relief.

This is the actual violin that was played on the deck of the Titanic as it was sinking, according to surviving eyewitnesses. It belonged to Wallace Hartley, who led the quintet band. Wallace’s body was found floating in the Atlantic several days after the sinking and his violin was found strapped to his back and stored safely inside its case. It sold for $1.7 million in 2013:

In 2014, scientists discovered an ancient virus that had been lying dormant in the Siberian permafrost for 30,000 years and that, when thawed, became infectious again. Though this particular virus poses no threat to humans, it’s a stark warning about what sort of long-forgotten threats to humanity might be unearthed as the globe continues to warm.

Katalin Kariko is an unsung hero of the COVID-19 pandemic:

Earlier this week, the Ingenuity Helicopter became the first aircraft to fly on Mars. One of the reasons this is such a huge deal is because there was no guarantee it would work. Mars has 1/3 of Earth’s gravity and a *very* thin atmosphere (helicopters need air to fly and there’s not a lot of that on the Red Planet).

Even so, NASA was confident they would succeed. So sure were they that Ingenuity would make history by being the first aircraft to fly on Mars that under its solar panel they fastened a small piece of fabric from one of the wings of the Wright brothers’ historic plane, the Flyer, which flew the first controlled and sustained flight on Earth.

This white stork with a Central African spear through its neck isn’t a recreation; it’s the real deal, and it’s on display in a German museum. There was a time when no one really knew where birds went during the winter months and in 1822, this hapless stork survived being speared in Africa only to make the long journey back to Germany to get shot by a hunter:

Some American honey contains low levels of radioactivity left over from nuclear bomb tests conducted in the 1950s and 1960s. How did it end up in honey? Long story short, the bombs sent a radioactive element into the atmosphere, wind and rain sprinkled it across the United States, some plants absorbed it, and bees pollinated those plants. Researchers say the amounts are very small and therefore harmless, but that “they may have been much higher in the 1970s and 1980s.”

This gorgeous volcanic eruption in Ethiopia was captured by photographer Olivier Grunewald. When burning sulfuric gas comes into contact with air, it turns blue. But beware, those very same gases can be deadly if you breathe them:

These are the Pyramids of Meroë, which were once part of a wealthy ancient city in the Kingdom of Kush in what is now Sudan. If you’re wondering what happened to the tops of the pyramids, which were once beautifully ornate, they were literally blown up in 1834 by an Italian treasure hunter named Giuseppe Ferlini, who then looted them and sold the artifacts to museums in Munich and Berlin.

And these fossilized footprints, which stretch for a mile and are the longest continuous set ever discovered, were left by a woman and a small child who were in a great hurry. For some stretches, the woman carried the child and at times the child walked on its own. Other prints in the area suggest she may have been trying to avoid saber-toothed tigers and that she likely crossed paths with a mammoth and a giant sloth:

Want to see what I learned in March? Click here to find out.