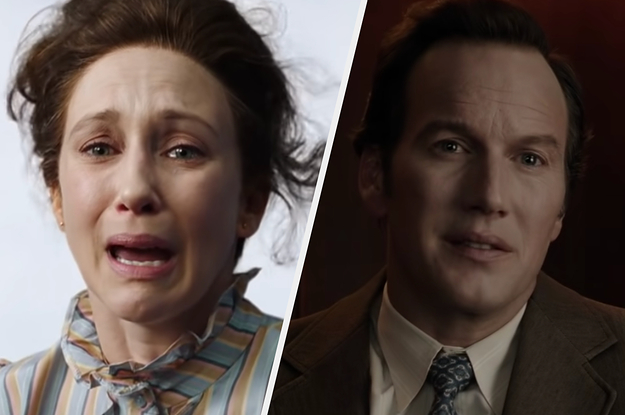 It’s official. The Conjuring is coming back for even more bone-chilling terror this summer with the third installment of the horror franchise.

Fans got their first look at the The Conjuring: The Devil Made Me Do It after the trailer dropped online.

As if Ed and Lorraine Warren’s paranormal case files aren’t spooky enough, the film is inspired by the 1981 real-life trial of Arne Cheyenne Johnson who “pled not guilty by reason of demonic possession.”

Michael Chaves is directing the soon-to-be-released film coming to the Conjuring universe. He last worked on 2019’s The Curse of la Llorona.

Before The Conjuring 3 hits theaters and HBO Max on June 4, we’ve rounded up everything you need to know about the cast so far. Ready to sleep with the lights on? Check out the details below:

Vera Farmiga and Patrick Wilson will be reprising their roles as real-life paranormal investigators Ed and Lorraine Warren.

The youngster was most recently seen as Billy Maximoff in WandaVision. He also appeared in Penny Dreadful: City of Angels and The Haunting of Hill House.

Ruairi O’Connor is portraying Arne, the man on trial after stabbing his landlord in 1981.

You’ll recognize him for his roles in Handsome Devil, Teen Spirit and The Postcard Killings.

Mitchell Hoog is playing the younger version of Ed Warren.

He previously appeared in the Saved by the Bell reboot, Harriet and Richard Jewell.

Megan Ashley Brown is set to portray the younger version of Lorraine Warren.

The actor and model has been in the Party of Five reboot and Animal Kingdom.

Other notable TV roles she has had include Monsterland, Law & Order: Special Victims Unit and The Valley.

Sterling Jerins will be returning as Ed and Lorraine’s daughter, Judy.

Outside of her role in the last two Conjuring films, she has appeared in Almost Family, Divorce and World War Z.

Shannon Kook will be back to play Drew Thomas. He has been in all of the previous Conjuring films.

You’ll recognize him from his other roles including Nancy Drew, The 100 and Degrassi: The Next Generation.

The actor was last seen in Birds of Prey, Bigger and Good Trouble.

Eugenie Bondurant will play a mysterious character dubbed The Occultist.

Bondurant has also been seen in The Hunger Games: Mockingjay – Part 2, MacGyver and Fear of Rain.

Are you more excited or scared as hell for The Conjuring 3? Sound off in the comments below!