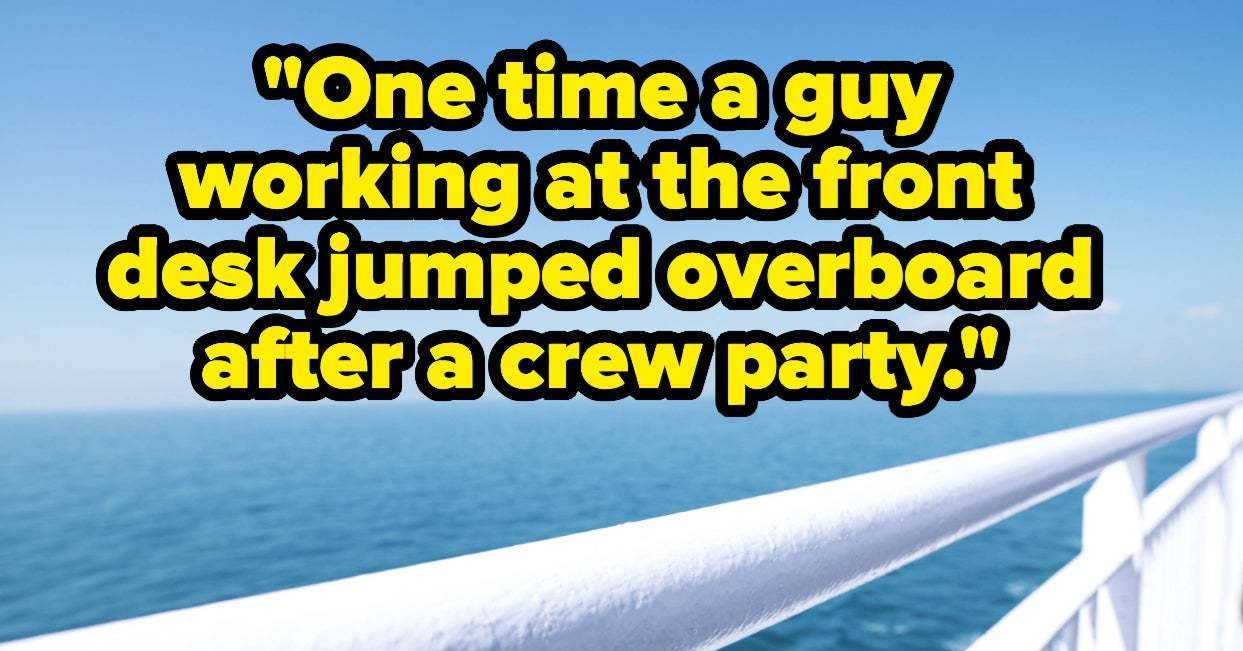 If you’ve ever vacationed on a cruise ship, you know things run pretty smoothly from the passenger’s point of view but from a worker’s perspective, a lot of things go on behind the scenes that people luckily don’t know about.

The responses are really something else…

“Water pipe burst in a store room and soaked ALL of the spare toilet paper. This was on day two of a 14-day voyage to Antarctica.”

“Fires. I worked on a cruise ship for 2.5 years and we had three major fires. They were all in crew areas and were controlled and extinguished by our awesome fire team. The passengers never knew what happened, only that their waiter had to leave in the middle of dinner service.”

“People don’t realize how much training the crew members go through to handle these situations. And they will never know that their waiter just helped save the whole godamn ship.” —u/wanderinggal

“I worked on a ship almost 15 years ago. Many stories. This happened to a friend of mine. A family came on. They had a teenage son, who was not interested in the cruise.”

“I was playing a production show (guitar) was standing on stage with a wireless unit alone to play Purple Rain, and then all of the sudden the house lights came on and the curtains closed.”

“Everyone in the audience looked at me, and I ran off the stage. Turns out a sewage pipe burst backstage and there was shit everywhere. Show was cancelled and the passengers didn’t find out why.” —u/Lacklusterbeverage

“I was a cruise ship worker for a few years and on a route between two cities there was a really bad storm. So a few minutes after the passengers got off, the storm got so rough that the ship was ripped off the docks and drifted out to sea.”

“I used to be a crew member, and one time a guy working at the front desk jumped overboard after a crew party. He was found a few hours later by the coast guard, and everybody was asked to be discrete in order to keep the cruise running smooth, and everything was fine until the captain came on the PA and said we were delayed because a crew member jumped overboard.”

“Then the madness begins, rumors appear out of nowhere, and the rest of the cruise was pretty much guests asking what happened the whole time.” —u/rjdac

“My “oh shit” moment was when I was hired for a ship with two day notice as a trombone player. When I got on the ship I found out that I was replacing a guy who had just died in a jet skiing accident in Nicaragua.”

“One of the waiters had to go to the backroom really bad but it was during the dinner rush so the supervisor told him to wait. He ended up running out of the restaurant and shitting his pants on the way out and left a trail behind him.”

“I currently work for a cruise line. I have assisted people who want to bury their loved ones at sea. Obviously, the bodies have to have been cremated and the ashes have to be in a biodegradable container.”

“I am a cruise ship worker. First one is, we don’t want you to know that we actually have more fun than the guests. Sure we’ll work the big white hot party that you’re all going to, but once we finish our shift all hell is breaking loose in the crew bar.”

“I’m working on a cruise ship currently. One time we had to turn around to take someone to a hospital, and then there was a fire in the laundry room, and it was also pretty rocky seas.”

“Somebody shot at the navigation bridge of the ship from the shore on my last ship, the bullet bounced off and hit my colleague on the hand (no real damage but it scared the hell out of her, ended up going home for a few weeks).”

“While we waited for the local police to come on and investigate and take statements, guests were told we were delaying the departure to take on fresh water. I’m still shocked that never leaked out.” —u/ElGofre

“Only one I have witnessed were two fires in the engine rooms. Scary thought, but because of the nature of the ships, normal workers are picked to be fire fighter trained.”

“One of the dancers in the cast got his foot caught in one of the hydraulic stage lifts…crushed two of his toes.”

“Worked on ships for about four years. On embarkation day, all the public areas of the ship are open like the theater, spa, gym, etc. so new passengers can see them and get settled in (but mostly so we could sell them packages).”

“A teenage girl and her 10ish year old brother had a serious argument on an open deck at night. She was much bigger than him. She picked him up by his throat and held him over the side of the ship.”

“I worked on a cruise for a year. During a rehearsal in the main auditorium one of the dancers got his foot caught in the crack of the hydraulic platform that raises up and down. Because some of the safety sensors were broken, the lift completely shut and sucked his foot into the space between the platform and the stage which was about a centimeter. I was friends with a lot of the dancers who witnessed it and they were pretty shook up from the screams.”

“After they got him stabilized, the captain came on and told us we were making a stop in Cabo so he could be flown back to the states for emergency surgery. I felt so bad for him, it was his first contract and he was so excited to be there.” —u/atcitizen100

“The ship always needs a certain number of crew members on board so when it’s your week/cruise to be a designated crew member your passport and ID are confiscated so you literally cannot leave the ship.”

“I worked on ships for three years and boy, the stories you hear about or live through. This one takes the cake, though. My colleague in the kids center who we all found creepy AF is now a convicted sexual predator serving 14 years.”

“My first week on the ship, a crew member committed suicide. The captain announced over the ship PA that there was an unexpected death of a crew member, but didn’t mention the circumstances. The guests knew someone had died and that the crew was taking over the theater for a memorial, but not how he died.”

“I used to work for a cruise. During one cruise, we had four passengers die from flu. The ship was considering going into quarantine at sea but luckily, we didn’t.”

“I worked on one and we had a complete power failure in the middle of the water near Southeast Asia somewhere. It was in the middle of the day, so everyone knew. Just sat there for hours as the temperature and humidity gradually rose until it was about as high as outside.”

“My ship hit a massive rock. No one knew except the officers. We took on water, but not enough to stop the cruise. We sailed into out last port, Seward Alaska, which is when the captain decided to inform the crew. New passengers were turned away. We spent two weeks slowly cruising to Freeport, Bahamas to get all fixed up.”

“Worked for a major cruise line for a year. We had to spray several bottles of a bleach solution over every surface of the kids club rooms every night because of norovirus outbreaks. Passengers got sick but the company somehow kept it out of the media.”

“I’m three days into working on a small cruise ship and there has already been a fire in the laundry room, a crew member almost died from a food allergy, and we crashed into the side of a lock/damn/passageway and it caused an entire liquor cabinet to come crashing down. I’m a housekeeper and the cabinet was in a room I’m responsible for, so that was much fun…”

Do you have any cruise ship horror stories to share? Let us know in the comments!