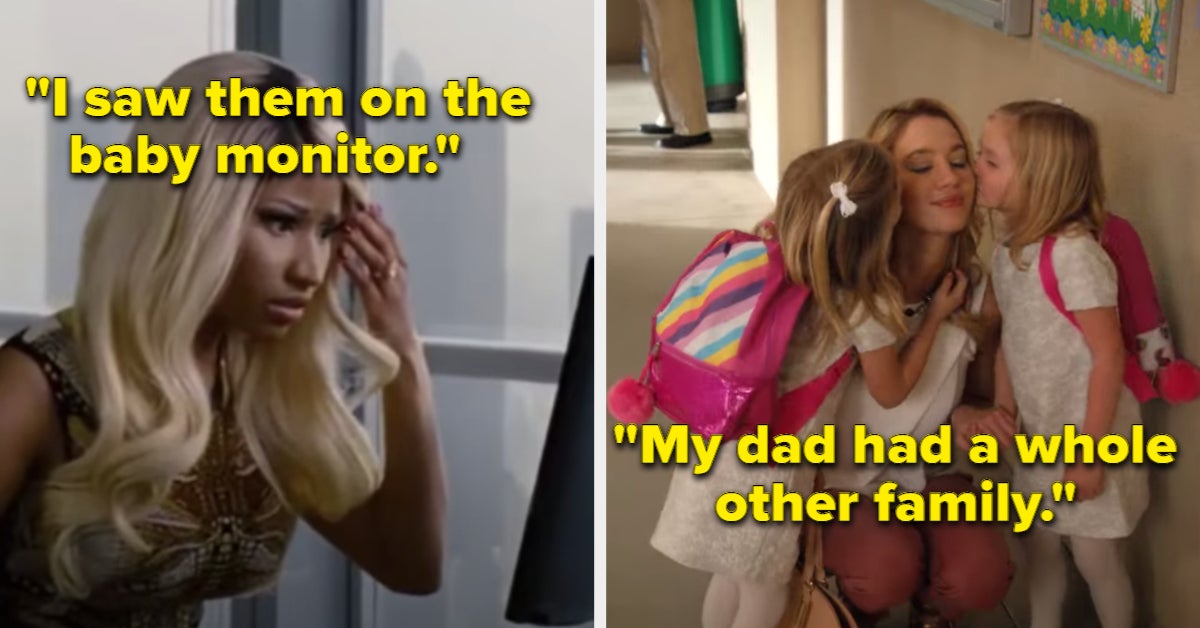 We recently asked the BuzzFeed Community to tell us the story of how they caught their parent cheating. Here are the wildest replies:

“I was around 7 years old and was messing around in my dad’s parked truck when I found a baby bottle under the passenger seat. I didn’t have a baby sibling. It turned out my dad had a whole other family.”

“My dad cheated on his new wife. I caught him in bed with another woman while I was away on a trip. I saw it on the baby monitor.”

“Our family had a shared computer. My dad wasn’t great about remembering to clear the computer history or logging out of things. My sister and I found multiple online dating profiles where he said he was either divorced or widowed.”

“He also was never as subtle as he thought he was when he’d sneak out to meet someone.”

“Around Christmastime, I was in my room doing homework and my dad was in the office. I wanted to see if he was buying my gifts so I decided to creep out and take a look. Crawling on my hands and knees, I slowly inched my way toward the office. I caught him scrolling through escort websites and messaging girls. The amount of boobs I saw was traumatic.”

“My dad dropped me off at my senior prom and started chatting to one of the teachers at the door. They seemed to really hit it off. Later on he texted me to say he might be late picking me up, but I didn’t check my messages and walked up to my dad’s car as we had originally agreed.”

“He and the teacher were in there together. She was promptly fired. My mom divorced him and we both haven’t looked back since. He was trash.”

“My dad told me he was going to burn some CDs and he needed time to concentrate. Nosy 5-year-old me walked in his room and saw him doing it with my aunt. On my dad’s side.”

“The other woman called to talk to my mom and I answered the phone. She had no clue my dad had a daughter and didn’t expect me to answer.”

“When I was 20, I got a Facebook message from someone claiming to be my half brother. It turned out he was. My father had a three-year-long affair when I was a toddler, the woman got pregnant, and he had been paying child support since. My mother knew as well. They just never told me.”

“It gets better. It turns out my dad had ANOTHER affair with ANOTHER woman (there were several) and SHE GOT PREGNANT. So there were in fact TWO secret brothers that I found out about when I was 20. Go figure.”

“My dad went ‘salmon fishing with a buddy’ but didn’t take his salmon gear. I hacked into his email and found several emails exchanged with a woman (including nude photos of them both) who turned out to be his high school sweetheart.”

“When he returned from his ‘fishing trip,’ I found a photo of them in his truck. I told my mum but she already knew. They divorced soon after and one month after it was finalized, my dad married the other woman and had a MASSIVE wedding that I was not invited to and was only told about six months later on a family ski trip. I was 12 years old and have deeply seeded trust issues that I don’t know I’ll ever get past.”

“My sister tagged along on errands with my dad one day when we were about 10. They stopped at a jewelry counter to look at a present for our mom when she overheard our dad asking the salesperson if they had two of a particular item. The store only had one so they left without buying anything.”

“My dad asked me to print some things from his email and I noticed emails from some dating site. I went quickly to grab the papers and when I came back, those emails had disappeared from his inbox.”

“I want to think that it was only spam, but he was very quick to erase it on his own, when usually he asks me or my siblings to delete his trash mail. I hope I’m just overthinking things but my mom once told me that he indeed cheated on her while they were dating, so I don’t know.”

“I was young and my mom took me to the movies and her friend from work joined us. I witnessed them flirting during the entire movie and he even rubbed his hands along her thigh. I was so grossed out because he was so ugly.”

“She acted like it was totally normal and said that I was imagining things when I asked her why her friend was touching her that way. She worked another job about a year and I witnessed more flirting with the man she would end up leaving my dad for.”

“My ex found out his mom was cheating on his dad when his mom was at work and accidentally texted my ex instead of her lover saying, ‘I’m in the bathroom waiting for you, my love.’
His dad was at work that day and mind you he worked over 50 miles away from her, so that text was indeed not meant for him.”

“My parents were ‘taking a break’ when my mom got sick and had to be rushed to hospital. I called my dad and he came to pick me up and took me to his flat. There was a woman there who told me that she’d been dating my dad for three years. He’d only been separated from my mum for a few months.”

“When I was 15, my dad picked me up from tutoring and said, ‘I love you too,’ as he got off the phone but I was on the phone with my mom when I got in the car. I got suspicious and went in his office and found a handwritten note from his mistress. The only thing I really remember from the note was her telling my dad that he doesn’t even love my mom and that he needs to leave her.”

“We knew the woman from my dad’s workout group. I told my mom, she kicked him out, divorced him, and he blamed me. Next time I saw the woman’s car in the gym parking lot, I smashed three of her windows and slashed two of her tires.”

“I was about 17 years old, hanging out with my then-boyfriend. I picked up my mom’s phone to find pictures of our cats and instead I opened up recent messages to see she sent nudes to her coworker.”

“This weighed on me heavily for months and after a huge fight with my mom, I broke the news to my dad. He was never the same after that and I am still dealing with the guilt from that conversation.”

“My mom always went out on Friday nights. At first, I thought she was going to meet her friends but I went through her texts one day and I didn’t see anything about Friday nights with her friends. I found that odd so I decided to track her phone using Find my iPhone since I knew her iCloud password. I checked her location and she was at an unknown house.”

“By the end of the month my dad found out that she was cheating on him with his boss from work and now they are divorced and I’m happily living with my dad.”

Did you catch one of your parents cheating? Let us know the story in the comments.