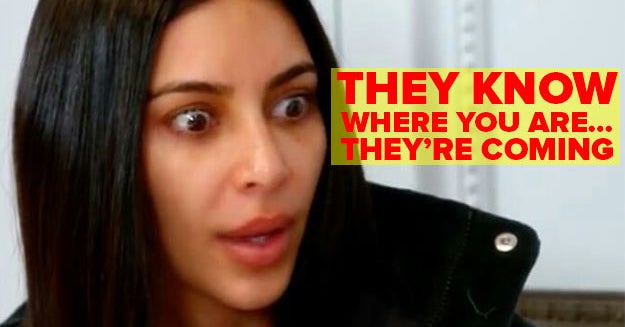 Not too long ago, we shared a series of posts in which parents told us the creepiest thing their kids have ever said (see them here and here), and they were creepy as hell:

Well, our readers continued to offer their own “creepy things my kid said” stories in the comments section, and here are some of the most chilling responses:

“My sister and my daughter used to share a room, and one night, my daughter sat up in bed, looked directly at my sister, and said, ‘They know where you are. They’re coming.’ And then she went back to sleep.”

“I was at a family event in India when one of my cousins mentioned that she was dreading her 10th-grade board exams. My other cousin — who was 4 years old at the time — responded, ‘You won’t live that long.’ My cousin ended up dying a year before her exams of a freak aneurysm.”

“When my son was 6 years old, I called him on Skype and he asked, ‘Who’s the guy standing behind you?’ I was totally alone in the room.”

“When my daughter was 3, she declared that she wanted her blonde hair to be red…’like the blood of a catfish.'”

“My 3-year-old son is afraid of the space under our stairs we use for storage, and one day he said he didn’t want to go in there because of ‘the man with orange eyes.’ I figured he was just using his imagination, so I played along and said, ‘Well, maybe the man is lonely. Sometimes things can look scary, but they aren’t scary at all.'”

“He responded, ‘No, he cooks children.’ Then he pointed outside at my neighbor’s roof and said, ‘The children he’s eaten are outside, and they’re all telling me not to go near him.'”

“My friend had two little girls who were 2 and 4 years old. Well, one day, she went to check on her girls during their nap and she overheard the 4-year-old say to the 2-year-old, ‘Tell me again what God looks like. I’m starting to forget.'”

“I’m a preschool teacher, and once, one of my students said, ‘Did you know I have dead people’s hands in my backyard? I step on them when they stick up too much.'”

“My dad died while deployed in Baghdad when I was 2 years old, and my mom told me that on the day he died — before anyone had informed us — she overheard me in my crib, crying and saying, ‘No, please don’t go, Daddy!’ We found out later that he had died a few minutes prior.”

Once, my 3-year-old son looked in the mirror above our fireplace and said, ‘What’s that lady doing in our mirror?'”

“Two weeks ago, my 5-year-old niece came into my room with a clipboard and asked, ‘Auntie, is it easier to wear someone’s skin or just their hair to the bank?’ I stared at her for a minute, and she said, ‘To the bank?‘ like I was supposed to understand. Then she wrote something on her clipboard, rolled her eyes, and left.”

“My little sister is afraid to sleep in her bedroom and gets out of bed to sleep with our mom every night. She says she sees a child running across her bedroom at night. Scares the crap out of me.”

“When my son was between 2 and 3 years old, he would vaguely mention that he’d been in an accident ‘before’ he was my baby. Each time, he mentioned it unprompted, with increasing detail, such as there being fire and he had been racing. I have no idea how he even knew about car accidents at that time!”

“I’m 6 months pregnant with my second child, and a few weeks ago, my 4-year-old pretended to take the baby out of my stomach and put it in the oven. I said, ‘OK, but when Baby Brother gets her, you can’t actually put him in the oven,’ and she responded, ‘What? He’s not burnt.'”

“My toddler was always babbling away in his room at our third apartment — and even though I had eerie feelings often while living there, I just assumed he had an imaginary friend. Well, fast-forward to the second day in our new home, when my son suddenly starting crying. I asked him what was wrong and he said, ‘We forgot her!’ I asked him who he was talking about, and he said his ‘sister’ who lived in his room at our old home. He was an only child.”

“One night, my son told me that three people had lifted him up and sung to him. I asked him if he was scared, and he said he wasn’t. I think it was my three deceased grandparents — they used to lift me out of bed and sing to me every morning when I was little.”

“I think they continued in the afterlife with their closest grandchild’s kid.”

“My dad told me that before I even spoke in full sentences, I once said to him, ‘I was once your daddy.’ His dad died six months before I was born.”

“When my brother was 5, he used to have nightmares. Well, one day he woke up crying, so I went to check on him and see if he wanted me to take him to our mom in the front yard. He was clinging onto my arm as we walked out, and he kept stopping to peek into each door we passed. I asked him what he was doing, and he cried, ‘I can’t tell you.’ I asked, ‘Why not?’ and he replied, ‘Because they won’t let me.'”