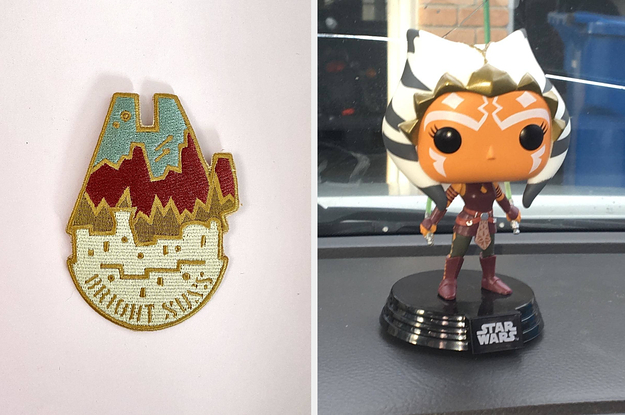 A magnet or patch inspired by Galaxy’s Edge, so you can keep your love of Star Wars and the Disney Parks on display at all times.

A Baby Yoda night-light that, for lack of a better term, will become the *light of your life*.

A hand painted reusable cup you can have customized with any character from the galaxy — good luck trying to choose!

A reusable cloth face mask covered in Star Wars icons that’ll keep you smiling (even if no one else will be able to see).

And a vent clip starring your favorite Star Wars character to hold said mask — a must-have for anyone who simply isn’t as wise as Yoda and often finds themselves pulling up to the store without a mask, only to have to turn around and go back home to grab one.

A cup for hot drinks with the, arguably, cutest child in all of the galaxy on it. Grogu is more than ready to help you *spill the tea* while also sipping on it.

Millennium Falcon cufflinks, so stylish they’ll take your outfit into hyperspace-levels of cool.

An X-Wing Fighter LEGO set complete with mini figures of Luke, Leia, General Dodonna, and R2D2 (who else would drive the jet?) that’ll look just as cool on your bookshelf as it does when your kid pretends to fly it around the room.

A Baby Yoda cross-stitch kit beginners can use to learn a new skill while listening to the epic score from the films. Sounds like a delightful day if you ask me!

A T-shirt of the Solo family to wear in honor of some of your favorite characters — just try not not to tear up when you catch a glance of yourself in the mirror.

A set of scrunchies you can accessorize with to ensure Baby Yoda is properly appreciated not just when you’re watching The Mandalorian but *all* the time.

A Baby Yoda made of merino wool — so soft you’ll probably want to buy one for every Star Wars fan in your life.

A pair of Adidas Stan Smith shoes featuring none other than Yoda and his classic advice. When it comes to your style…do or do not. There IS no try.

A Mandalorian parody prayer candle to guide you and your beloved Baby Yoda through the darker episodes of the series.

A badass Princess Leia tribute T-shirt you’ll want to wear during your epic re-watch of all the films and series — all nine of the Skywalker films, Clone Wars, The Mandalorian, the list goes on and on.

Speaking of re-watching… a subscription to Disney+ that’ll give you access to everything the Star Wars universe has to offer! Bad Batch is here (AHH!) and The Book of Boba Fett arrives in December — time to get on board.

An Aurebesh pocket translator that’ll complete your cosplay look and help you learn the Star Wars ABCs — whether you’re headed to Batuu or Alderaan you’ll be ready to roll.

A colorful 14-quart cooler you can fill with bottles of blue milk before you head off to a galaxy far, far away (AKA your backyard).

A concrete planter set complete with air plants that’ll need sun, perfect if you live on Tatooine where they happen to have three of ’em.

A
personalized leather money clip you can engrave with your name and favorite character — good luck trying to choose between Boba Fett and BB-8.

An Ahsoka Tano Funko Pop figure for the real fans who have watched all 66 hours of Clone Wars and screamed like a baby when you heard she’ll be featured in her own Disney+ series.

Build-a-Bear’s version of “The Child” features realistic baby sounds that’ll leave you cooing and bouncing him on your hip like, well, a child.

A Millennium Falcon keychain bottle opener so you won’t have to use The Force every time you want to crack open a bottle of blue milk.

A Chewbacca seatbelt cover, guaranteed to keep you comfortable during your family road trip to Disney to check out Star Wars: Galaxy’s Edge.

A Tatooine trucker hat that’ll give you exactly what you need to represent your hometown — or at least the one you wish you were actually from.

A mini engraved rolling pin, for when you want to take your Star Wars marathon snacks to the next level. We👏 love 👏 a 👏 theme 👏.

A dainty necklace any member of the Rebel Alliance would proudly wear alongside all their other baubles. Just be careful, a Bounty Hunter in between jobs may want to snag it off of you and try to sell at at the underground market — it’s *that* gorgeous.

A set of LED light saber chopsticks that’ll make all of your at-home sushi dinners feel like a night out at the Cantina (but without all the gambling and violence).

“National Park” patches of Hoth and Jakku in both day and night that’ll impress both nature lovers and Star Wars fans alike. Add this to your jean jacket and watch as the compliments roll on in.

A Loungefly backpack you’ll want to fill with snacks before you head over to your friend’s for a May the Fourth marathon.

A sweatshirt starring a minimalist drawing of the droids you actually *are* always looking for — C-3PO and R2-D2!

An enamel pin of Grogu doing what he does best — chowing down on a frog. This is a must-have for your ever-growing collection…just think of how cuuuuute he’ll look on your backpack or denim jacket!

And The Art of Star Wars: Galaxy’s Edge, a stunning tribute to all the magic that went into creating this incredibly themed area of Walt Disney World and Disneyland Resorts. Paging through this will be the next best thing to actually setting foot in the Black Spire Outpost.

Me, looking at my credit card bill after going a *little* too hard on Star Wars purchases: