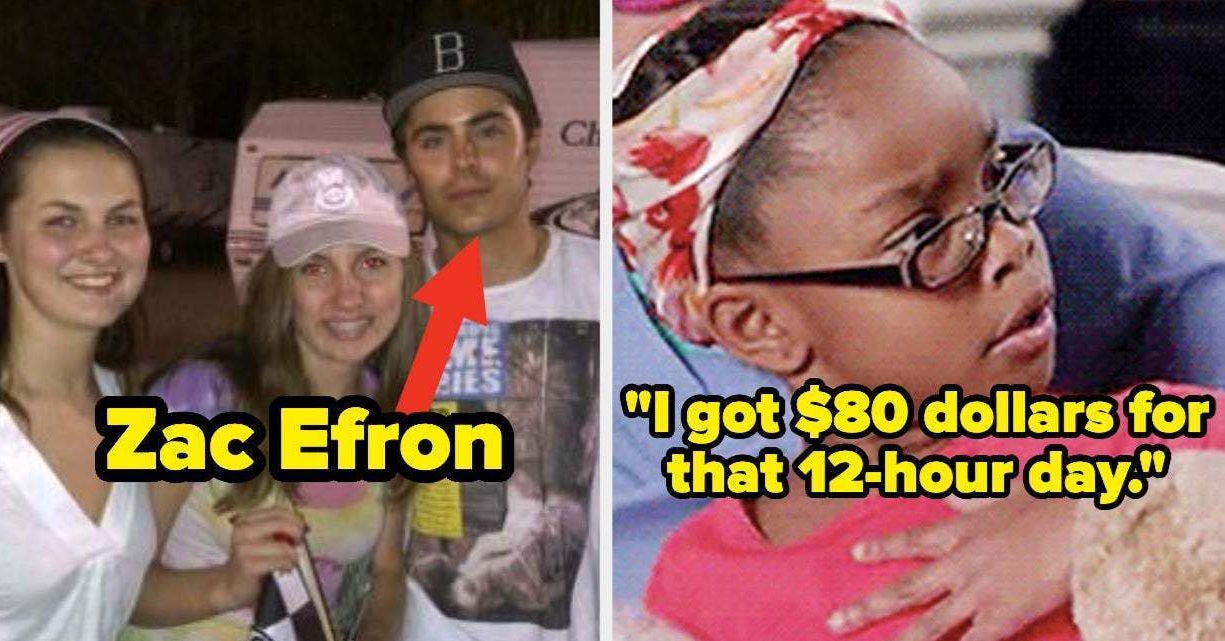 We asked members of the BuzzFeed Community to tell us behind-the-scenes secrets and stories from working as a background actor. Here are some of the best stories from set:

We cannot confirm the accuracy of these stories – people are speaking allegedly from their own experiences as background actors.

“I worked on That’s So Raven, Cory in the House, Wizards of Waverly Place and so many other kids/teen shows and movies. Most, if not all, of the background workers are what is called 18 TLY or 18 ‘to look younger.’ Everyone is older than 18 so they can work for an extended amount of hours and the production won’t be fined for child labor laws. So, if you look young, you could be in your thirties and playing a teenager.”

“I was an extra in Season 4 of Cobra Kai. They film all the scenes wayyyy out of order. I was in the last scene that they filmed for that season even though the scene took place in one of the first episodes of the season.”

“I filmed a winter scene in July for a holiday movie and the layered sweaters I was put in were brutal.”

“I was picked up by Billy Crystal. Literally. Many years ago, I was an extra on City Slickers II: The Legend of Curly’s Gold. Billy’s character was running through a crowd and was supposed to bump into my shoulder as he ran past me. On one take, he came directly at me head on. To avoid knocking me over, he ended up lifting me off the ground entirely. I clearly remember my two feet dangling in the air for a few seconds. He gently set me to the side and kept running. Sadly, they didn’t use that take in the movie.”

“I was an extra in some night scenes of a Hallmark movie filmed at Big White near Kelowna, BC. Chad Michael Murray is as handsome in person as he is on screen.”

“I was an extra on Capote. During a break I ran to the bathroom and ran into Bob Balaban on my way back to my mark. He asked if I was a paid or featured extra (nope) and said, ‘Well you look very nice.’ It was lovely because I’m a huge fan of his!”

“I was an extra on the movie ATL. They paid me extra because my car, a Honda Civic, was ‘preppy’ and it was supposed to be a private school. It was fun and I literally ran into Diana Ross as I turned away from the water fountain (her son was in the movie).”

“I was an extra in the live-action Charlotte’s Web, which was filmed, in part, here in Australia. At one point the director asked us to create some background babble for sound, but then stopped a minute or so into filming to tell us that mimicking Paris Hilton and saying stuff like ‘oh my gawd’ in exaggerated Valley girl accents probably wouldn’t work for scenes set in late ’40s/early ’50s Maine…”

“I was a child extra on Crazy Ex-Girlfriend. We spent hours perfecting a five-minute song where the kid wasn’t actually singing. I got cropped out in the end because I was staring awkwardly at the main characters and was too close…”

“I got a mohawk for the casting call. I was glad when the job ended, so I could sleep on my back again.”

“I was an extra in Whip It, with Elliot Page as a roller derby girl. Easy money, right? It is until you go for 16 hours every day for nine days. I don’t know how the actors do it.”

“I was an extra on Comanche Moon. The big ending was a native attack on our town. They told us to run around as they burned the town and stole our horses. I was paired with a 10-year-old kid as my son. My movie son accidentally ran into the path of 30 thundering horses and I yanked him out of the way at the last second, saving his life. I got $80 for that 12-hour day.”

“I was an extra on a few episodes of Friday Night Lights. The football game scenes were fun, but lasted all night.”

“I am not famous at all, but I’ve had people ask me for a picture or an autograph while I’m waiting for the director to say action. It takes you out of the moment, and then they get pissed if you decline. But I’m at WORK. And these people are famous, but they’re also at WORK.”

“I was an extra in a Barenaked Ladies music video years ago. The band needed enough people to fill a music hall, and called on fans to turn up to fill out the crowd. Between takes, the band would play other songs for us, and as each member was doing their closeups, the rest of the band would mingle and hang out with us.”

“My retired grandparents somehow got chosen as background actors for the movie At Any Price starring Zac Efron and Dennis Quaid. They got to bring family and friends for some larger crowd scenes. The notable thing is that sometime during filming, my lovely grandma completely charmed one of the assistant directors. So at the end of the day, she just CASUALLY mentioned that she had brought her grandkids who really wanted to meet Zac and the director just replied, ‘Why didn’t you say so earlier?’ So thanks to my grandma, Zac Efron was dragged out of his trailer after a day of filming to meet us and take pictures.”

“My daughter has done A LOT of background work during her childhood. On the set of Amelia, parents were asked if they could keep the kids longer than the allotted eight hours just to finish up one scene. EVERY SINGLE parent just said yes, while I said, ‘I need to check in on my kid first to see how she’s coping.’ Not one parent took their kid into consideration. Pissed me off.”

“A good friend was an extra on a Hallmark movie. He was supposed to hold hands with someone in a ‘romantic’ crowd scene and the woman he paired up with wasn’t white. They actually got told that they’d need to pair up with other people. They weren’t explicitly told not to depict interracial relationships but it was heavily implied.”

“I worked on a lot of shows, but my favorite was season one of Homecoming! It was a regular gig and most of the group bonded very nicely. We were treated very well and the catering crew memorized our breakfast orders. We even had our own wrap party!”

“I was an extra in the movie Maverick. We were a small group for the exterior boat scenes and spent an average of 12 hours on a small sternwheeler with the stars. Mel Gibson is surprisingly short and had to stand on boxes to look taller than Jodie Foster.”

And “My parents were extras in a very bad movie that filmed partially in London. Their scene was at a nightclub and evidently they had to sit through one of the performers singing ‘Beyond the Sea’ for hours for the crowd shots. My mom now hates ‘Beyond the Sea’ and groaned when it was played over the credits of Finding Nemo.”