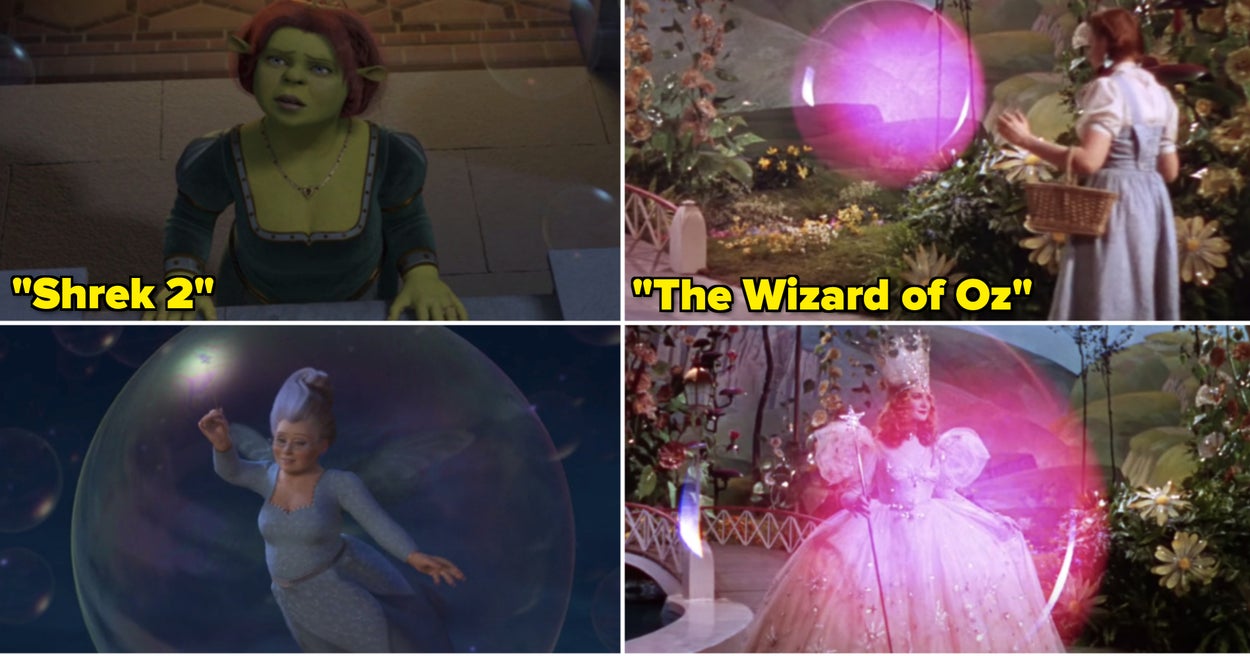 In Shrek 2, Fairy Godmother appears at Fiona’s balcony for the first time in a magical bubble in the exact same way Glinda the Good Witch greets Dorothy in Munchkinland in The Wizard of Oz.

In Shrek 2, when Puss in Boots is having a glass of milk at the bar, he quotes another famous orange cat who always goes through a hard time: Garfield!

And in the same movie, when Shrek and Fiona are sleeping in her childhood bedroom, you’ll notice one of her band posters is verrrry similar to an iconic pose Robert Plant and Jimmy Page of Led Zeppelin did back in the ’70s.

At the end of the first Shrek movie, when Dragon breaks through the glass window of the church, scoops up Lord Farquaad by the mouth, and eats him, she’s mirroring a famous death scene from Jurassic Park.

In Shrek 2, when Donkey feels the effect of the Happily Ever After potion come over him, he references Fred Sanford’s infamous “heart attack” line from Sanford and Son.

Remember the dinner scene in Shrek 2, when Shrek, Fiona, and the rest of the family yell each other’s names in the quickest and most hilarious way? Well…

It’s an homage to the scene from The Rocky Horror Picture Show when Brad, Janet, and the rest of the gang shout each other’s names in the lab.

In Shrek, when Fiona defends herself against the merry men in the woods and jumps in the air, she copies Trinity’s iconic move from The Matrix when she fights the police officer.

In Shrek, when Shrek congratulates Donkey for running across the unbalanced bridge with lava underneath it, he’s actually quoting Arthur Hoggett’s infamous line to Babe from the end of Babe.

In Shrek 2, when Shrek and Donkey are trying to escape from the police, they make a subtle reference to the infamous O.J. Simpson white bronco chase from 1994.

At the end of the first Shrek movie, they completely mirror the fairy-tale ending to 1950’s Cinderella — brown leather book and all.

In Shrek 2, when Fairy Godmother, Prince Charming, and Harold stop at a “Fat Boy” drive-thru restaurant, they give a nod to the Big Boy restaurant (a place that’s notoriously featured in another iconic Mike Meyers movie series: Austin Powers).

When Fiona sings to the blue bird in the tree in the first movie, she’s mimicking the same princess-like singing montage Snow White does in Snow White and the Seven Dwarfs.

In Shrek 2, when Gingy, Shrek, and the Muffin Man create a giant gingerbread man (aka Mongo) to destroy the Fairy Godmother, and Gingy yells “It’s alive!” (just like Henry Frankenstein does after creating Frankenstein’s monster in 1931’s Frankenstein).

In Shrek the Third, after Queen Lillian (aka Julie Andrews) uses her head to smash the brick wall, you can hear her humming “A Spoonful of Sugar” and “My Favorite Things.” Andrews sings these two legendary songs in her two most popular movies: Mary Poppins and The Sound of Music.

At the end of the first Shrek movie, when Gingy wobbles on a candy cane and says to the camera: “God bless us, every one,” he’s referencing Tiny Tim’s legendary movie quote from Scrooge (and from the Charles Dickens book A Christmas Carol).

In Shrek the Third, when Shrek has a nightmare about all of the mini ogre children he’s going to have, the stroller from the horror movie Rosemary’s Baby creepily rolls into the swamp.

In Shrek the Third, when the students arrive at the academy “stoned” with smoke coming out of their van, it’s an homage to Fast Times at Ridgemont High, when Spicoli and his friends arrive late to school because they’re smoking.

And during the honeymoon montage in Shrek 2, Fiona kisses Shrek as he’s hanging upside-down, just like Mary Jane does to Spider-Man in Spider-Man.