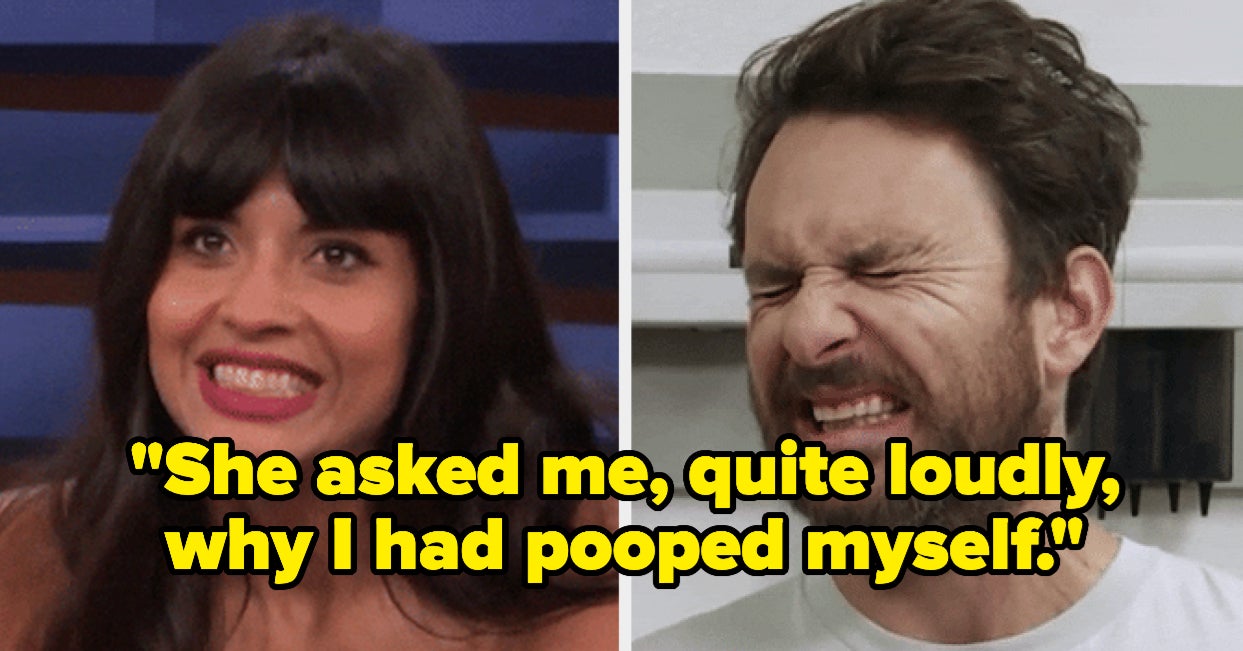 We asked members of the BuzzFeed Community to share the wildest ways their kids have ever embarrassed them in public. These are the hilarious results:

“My brother walked into the ER when he was 6 and screamed, ‘My dad’s here for wiener cream!'”

“My 3-year-old announced to the whole fitting room area, ‘I see your thing momma, and it has hair!’ while I tried on clothes. I forgot I had gone commando that day.”

“When I was around 5, I was in the grocery store with my mom. For some unknown reason, I decided to see what would happen if I stuck my tongue to the frozen metal on the inside of the open-top freezer bins. I climbed up the side of one, bent over the edge, plunged my head in, and stuck my tongue to the side. I got stuck and couldn’t get my tongue to come off. It took about five minutes of screaming, crying, and my mom rubbing my tongue with a warm rag from the staff to get it peeled off. I got blood everywhere. Pretty sure my parents didn’t take me grocery shopping again until I was in middle school.”

“When my daughter was about 3, we were at a very awkward dinner party with my in-laws where everyone was meeting my sister-in-law’s new husband for the first time. Apparently, my daughter picked up on the awkward silence, because she pointed to her plate and announced, ‘This is some pretty good shit!'”

“When my daughter was 3, we were at Target and she had to use the bathroom. Since we were already there, I figured I would go too. Big mistake! While I was going, she leaned over and looked under the stall. She stood up quickly and with a look of amazement on her face, so I knew something was about to go down. She promptly yelled, ‘Did you see how big that lady’s panties are?’ I wanted to hide.”

“When my son was an infant, he had the loudest farts. He would fart in public and people would assume it was me, not my teeny baby, because of how loud the farts were. Eventually, I stopped telling people it was him because I just looked like a weird lady who kept blaming her gas on her child.”

“When I was a kid, I shoved pizza crusts into a waiter’s apron and told her, ‘Keep the change, you filthy animal,’ after watching Home Alone.”

“I took my 3-year-old into the bathroom stall with me while we were at Target. I was just getting over my period, and she asked me, quite loudly, why I had pooped myself.”

“I was working as a cashier several years ago, and this little girl (maybe 6 years old) was trying to get her mother’s attention. Mom was busy writing a check, so the little girl turned to me and said, ‘You wanna know what my mommy says to my daddy when they’re alone?’ Mom’s head shot up just as I laughed and said, ‘Sure!’ The little girl pushed her bum out behind her and started waving it back and forth shouting, ‘Smack my bottom! Smack my bottom!’ I’ve never seen a parent snatch a child out the door so quickly.”

“Like every other toddler, my 3-year-old son absolutely could not stand to hear the word ‘no.’ When he was told no, he would drop his pants (and pull-up) and bolt. It didn’t matter if we were at Nana’s, Target, or the grocery store. The biggest incident occurred at his uncle’s summer softball league’s championship game. I told my son no for some reason, and he immediately dropped his shorts and pull-up. Now, picture a toddler booking it as fast as his little legs could take him as he ran in front of the stands and out toward centerfield. He got cheers and a standing ovation from both sides.”

“My son was all but entirely non-verbal until he was 4. One of his first words unprompted was ‘mustache,’ which he loudly said while pointing at a middle-aged woman standing behind us in line at the supermarket. She was not amused.”

“My 2-year-old old can’t say ‘truck’ right — it comes out as ‘cock.’ Recently, she spent an entire shopping trip with my husband loudly talking about ‘daddy’s big COCK.'”

“I was shopping at the grocery store and pushing the cart while my 2-year-old was sitting in the seat. He randomly asked, ‘What are you hiding?’ and pulled the neck of my shirt down, showing my tits off to all of aisle 9.”

“My 3-year-old son and I were in Nordstrom. I was waiting in line to do a return when I suddenly realized my son wasn’t beside me. Then, I heard him screaming, ‘Mom! Mom!’ I started looking for him and spotted him standing on a high platform with two mannequins in the center of the store. He hiked up one mannequin’s skirt and yelled, ‘Vagina! Here’s her vagina!’ The store went silent. I wanted to hide, but instead, I ran up and started to pull him off the platform. At that point, I heard laughter. A family was just behind me and the father turned to me and said, ‘Thanks! That made our day.'”

“I was shopping at Guitar Center for a new keyboard. My oldest son was only 3 at the time. I had been holding him the entire time, and he had been totally quiet. I waved the sales clerk over because I had a question, and the minute I asked him my question, my son started slapping my chest and loudly yelling, ‘Booby! Booby! Booby!’ over and over. It took a lot of hushing to make him to stop. To the sales guy’s credit, he managed to answer my question without laughing hysterically. I, on the other hand, turned the color of a lobster.”

“When I was a kid, my mom and I were in our local mega store at the checkout till and my mum told me to hold her purse. I was a curious 9-year-old, and went looking through her purse because I was bored. I found a receipt from Ann Summers for something called a cock ring. I didn’t know what it was, so while my mother was being served by the lady at the till, I very loudly asked what a cock ring was and where Ann Summers was because I’d never heard of it. She just gave a knowing smile to the cashier, who looked very uncomfortable, and told me to give her her purse back.”

“When our daughter was 3, we were in a restaurant with all five of our kids. She was bored because she had finished eating first, so she started grabbing things and throwing them at her brother. She grabbed a salt shaker and started to throw it, so my wife picked her up and started walking to the car with her. The moment they hit the parking lot, our daughter started screaming, ‘STRANGER! SAVE ME! STRANGER!’ Someone called the police and we had to prove she was ours!”

Finally: “I took my 4-year-old sister on a day trip to the zoo, and she wanted ice cream. I said no because she gets so hyper when she has sugar, and she got mad. She threw a huge fit until I eventually gave in and got her ice cream. She ate the ice cream, then projectile-vomited all over the zoo cafe, all over me, and just everywhere. I’ve never been more embarrassed!”

Has your kid ever embarrassed you in public? Leave your story in the comments!

Note: Submissions have been edited for length and/or clarity