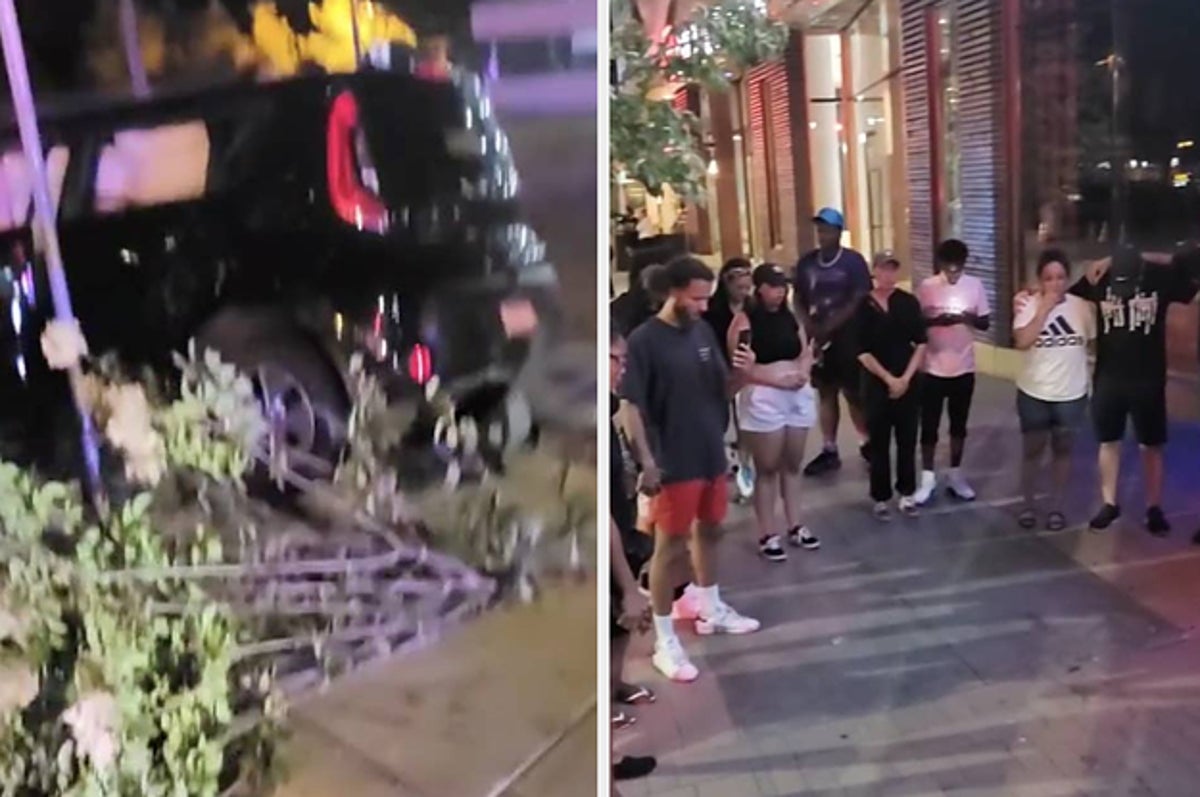 A woman was killed and three others were injured after a man drove a car into a crowd of people who had gathered at a vigil to protest police brutality in Minneapolis on Sunday night, police said.

Videos on social media showed protesters apprehending the suspect who was arrested and taken into custody. He was transported to a hospital for his injuries, police said.

Authorities did not identify the suspect or provide a motive, but a Minneapolis Police Department spokesperson said, “the preliminary investigation indicates that the use of drugs or alcohol by the driver may be a contributing factor in this crash.”

According to witnesses on social media, a group of people had gathered Sunday evening to commemorate Winston Smith, a Black man who was shot and killed by sheriff’s deputies on June 3 in the Uptown area of the city.

Videos showed a small group of people playing volleyball on the street that had been blockaded by parked cars, wooden barriers, and signs against police brutality.

“I have never [seen] something this horrific,” a witness said in an Instagram post showing graphic video of the aftermath. “Today was one of the most peaceful and happy moments out here holding space for Winston. We were playing volley ball and green light red light.”

At 11:39 p.m. local time, police monitoring the protest on camera observed a vehicle drive into the group of protesters.

Witnesses said the car sped up as it approached the crowd. They said it hit another parked vehicle, which then struck a woman who was sitting on the street. The impact caused the woman to fly into a pole, according to bystanders. Videos showed a group of people tending to the woman who was lying in a pool of blood.


The woman, who was critically injured, died at the hospital, authorities said. Three others were hospitalized with non-life-threatening injuries.

Protesters and activists at the scene identified the victim on social media, but BuzzFeed News is not naming her until officials or family members release her name.

In an Instagram post, one witness said she was “literally the sweetest human I have interacted with! Last couple of days we been talking about health, veganism and her recovery.”

Protesters pulled the male suspect from the vehicle and, according to police, began to strike the driver. Videos posted online showed people grabbing and restraining a man who had blood on his face but it was not clear from the footage if he was being hit.

In the ensuing chaos, some witnesses said that police officers threatened to mace the protesters. After the incident, videos showed a group of people, some crying, as they held their hands and prayed in a circle.

“We were just holding space. We literally was playing Red Light Green Light Before I half froze and almost got killed in this terrorist attack,” Donald Hooker Jr., an activist who was at the scene, said on his Facebook page. “But more importantly I was chanting and helping create a space that felt safe and some one died on my watch,” he said.

There have been protests, marches, and vigils for Smith after undercover sheriff’s deputies on a US Marshals task force shot the 32-year-old multiple times and killed him while he was in his car on a parking ramp.

The North Star Fugitive Task Force, comprised of Hennepin and Ramsey County sheriff’s deputies, was attempting to take Smith into custody in relation to a warrant for a felony firearms violation when authorities claimed he fired a weapon from inside the car based on evidence at the scene. Investigators said they recovered a handgun and spent cartridge cases from inside the driver’s compartment.

However, a 27-year-old woman who was a passenger in Smith’s car during the incident has disputed authorities’ account, saying that she did not see a gun on Smith or inside the car at any time, her attorneys said in a press conference last week.

There is no body camera or squad car footage of the incident. The Minnesota Bureau of Criminal Apprehension (BCA) — which is investigating the shooting — said the agency is prohibited from releasing the names of the undercover officers involved in the shooting.

Family members and activists have demanded transparency from authorities and have questioned the lack of body camera videos in the incident.

In its initial statement, the BCA said the US Marshal Service prohibits the use of body cameras for officers serving on its task force. However, the Department of Justice issued a policy last October allowing police officers to wear body cameras on federal task forces.

The US Marshals began to “phase-in” the policy in February this year, including in Minnesota, the US Attorney’s Office in Minnesota said in a statement after Winston’s death.