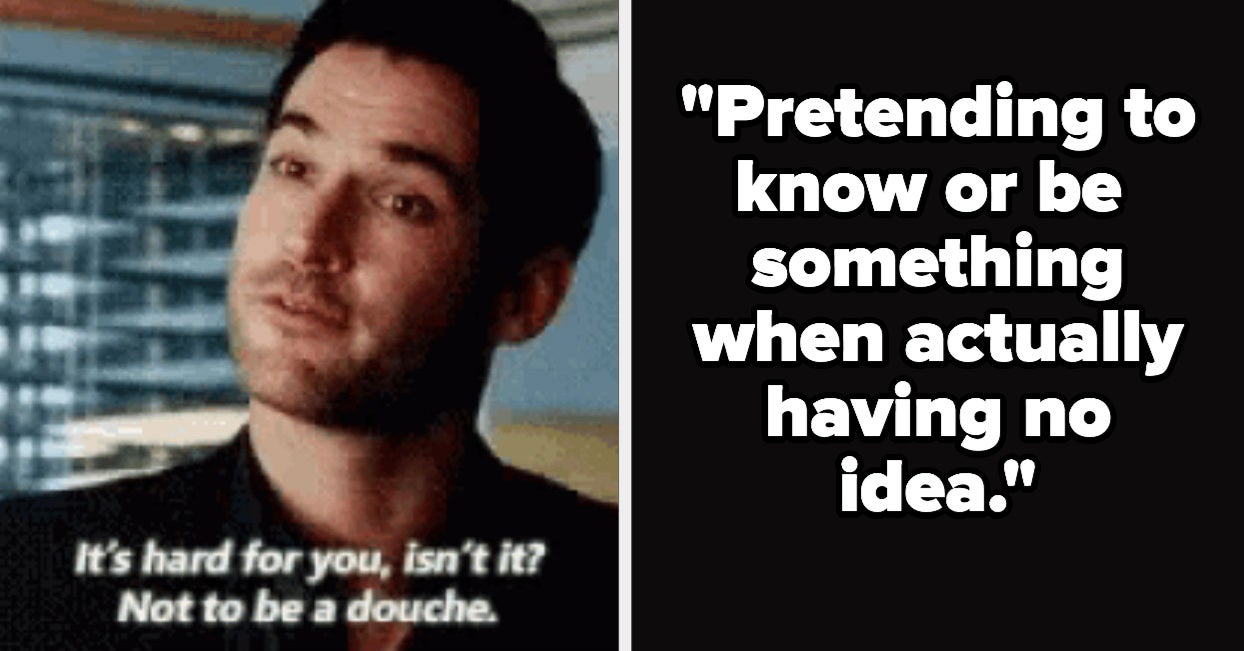 The thread went viral and was filled with thousands of replies, as people shared all things people do that are anything but cool and just plain douchey. Below are some of the top-voted and best comments:

“Posing as being brutally honest — constantly invalidating others is not cool and speaks of your inability to feel validated by anything other than hurting people.”

“Pretending to know or be something when actually having no idea.”

“I have a coworker who has the ‘gift of gab’ and is very proud of his ability to give people false assurances while being extremely vague, essentially just bombarding them with words until they’re satisfied. It’s a useful trick, I suppose, but when you hear him do it in real time, you realize he’s just a very good liar.”

“The ones who don’t know how to get attention so they start gossiping about everyone. And I’m like, I know your life is not interesting, but please have some respect for others and for yourself.”

“Sharing their trash taste in music out loud on public transportation.”

“Picking on someone in a group and trying to get everyone else to laugh at them. Not in a ‘Hey! Everyone’s joking around kind of way,’ but in a ‘being a nasty piece of work and embarrassing the person kind of way.’ People like this suck.”

“Endlessly talking and bragging about their private lives.”

“Example: I once had a real dick of a boss who once said, ‘Man it wasn’t yesterday I got laid with that woman’ after a customer left, which made me and my colleagues somewhat uncomfortable. He also talked about how his wife better show those ‘TTs’ for everything he does.

“Constantly telling people about the women they’ve slept with or were otherwise involved with. I knew a guy like this in college, he was one of the most obnoxious dudes I’ve known.”

“I’ve had dates who were dismissive or slightly rude to servers and it was a huge turn off.”

“Failing school does not inherently make you a douchebag, but bragging about it as if it’s something that is cool isn’t the best presentation of character either.”

“Picking on kids who are different.”

“Vandalizing rocks, trees, etc. in parks and nature preserves. It takes you out of the experience when you’re scanning a gorgeous landscape and your eyes land on ‘butthead + ding dong forever’ in bright colors.”

“This is very specific, but I once knew a bloke who thought he was cool for not liking Game of Thrones, which is fine, but he would then post spoilers of it on social media along the lines of, ‘I don’t watch or care about Game of Thrones, but X died in the most recent episode, unlucky if you saw this.’ I fell victim of it once and I literally thought my blood was boiling. I was so angry.”

“The lesson here is probably to stay off social media before you’ve seen the most recent episode of a show you love. But still, fuck that guy!”

“Doing something nice for someone and video taping it for clout.”

“Gatekeeping a music artist like they discovered them and are the whole reason for their success. Don’t get me wrong support the artist but don’t be that asshole that determines ‘who is worthy’ of a common trend.”

“Supporting a celebrity that doesn’t give a sh*t about your existence online to the extent of bullying and name calling people who don’t worship that celebrity.”

“People who tease guys for drinking ‘girly drinks.’ If a guy wants to drink a strawberry daiquiri let him drink it in peace. You know what is manly? Drinking whatever the fuck you want without giving a shit what people think.”

“The line between joking and bullying can be a thin one, and a lot of douchebags either don’t see it or they just don’t care.”

“Driving around residential areas too fast in cars with really loud engines and those exhausts that go BANG, BANG, BANG all the time. They look like nothing other than inconsiderate assholes.”

“Undermining a person every time they try to talk.”

“My ex did this to me and the amount of confidence I’ve lost is terrible. Still recovering after three years. Teasing someone when they gather guts to talk in a group and then laughing is useless. Cannot explain how badly it hurts.”

“Judging another person for their interests even if the other person’s interests don’t affect or hurt anyone else. The other day I had an acquaintance tell me how a friend of mine who likes to collect Funko Pops! must be ‘such a virgin’ even though the guy is literally married with a kid on the way!”

“Being an asshole to other people just to boost your own ego.”