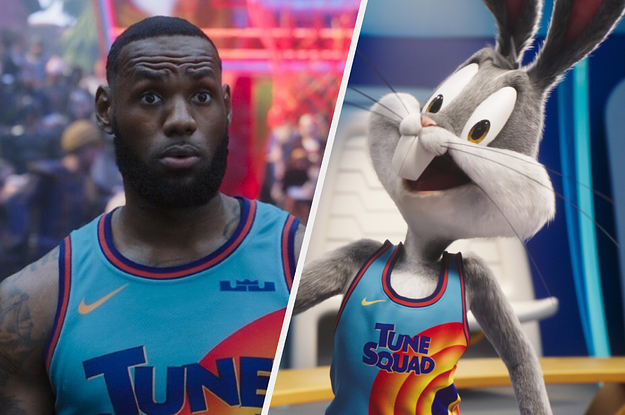 Space Jam: A New Legacy (aka the sequel starring LeBron James) is now in theaters and streaming!

And the sheer number of cameos and Easter eggs in this movie will have your jaw hitting the floor.

Luckily the amateur detectives over on Twitter have helped us unpack the dozens of cameos, most of which come from the DEEP vault of Warner Brothers properties.

So here are the tweets with all the details:

To start there was an appearance by Big Chungus (aka fat Bugs Bunny) the famous internet meme.

We also got several old school Looney Tunes Easter eggs like this pic of Yosemite Sam in the barber shop.

Or the appearance of the Nintendo Gameboy game Crazy Castle that starred Bugs Bunny.

As well as references to LeBron’s career.

We got some shameless product placement from Nike

And this from TNT, which something tells me was less planned ahead of time than the Nike spon.

My future husband Steven Yeun showed up for a brief cameo as a Warner Bros. executive.

But unfortunately Wayne Knight from the original Space Jam did not.

The Nerdlucks, however are back.

As is Daffy Duck, who the internet is finding sexy?

And so do Rick and Morty.

And Don Cheadle dressed up as Bill Belichick.

The WB Water Tower can be seen in the background.

As well as a a whole host of Hanna-Barbera characters.

Since Warner Bros. owns DC Comics, we saw plenty of DC characters pop up, such as when Bugs and LeBron fought crime as Batman and Robin.

Or when Batman himself showed up in the audience for the final basketball game.

Joining him was Jack Nicholson’s version of the joker.

And Joaquin Phoenix’s version is seen on a poster at Warner Bros.

Mr. Freeze can be seen in the game’s audience.

As can two different versions of Batman’s nemesis the Penguin.

And even this random guy from Batman Returns is here.

And we learn that LeBron is actually a Hufflepuff.

And then the War Boys show up to the game.

It‘s Pennywise is lurking around.

They inserted Yosemite Sam into Casablanca.

And of course repurposed the film’s iconic line.

Morpheus from The Matrix pops up.

As do other characters from classic cinema.

As do some familiar faces from A Clockwork Orange and Game of Thrones.

People were especially excited about the GoT references (and of course the dragons.)

The Mask was represented.

As was a not-so-Christlike nun.

King Kong and The Iron Giant watched LeBron battle his son on the court.

Although this version of the Iron Giant appears to actually be from Ready Player One.

The Gremlins also showed up.

Space Jam 2 also had a few baffling Easter eggs such as this one to Pixar?

And maybe the yellow character from Among Us?

The best cameo however was Michael B. Jordan…

…Who treated us with the catchphrase from Friday Night Lights the show where he got his start.

I wonder how the original Michael Jordan feels about all this.

Did you notice anything we missed? Let us know in the comments!