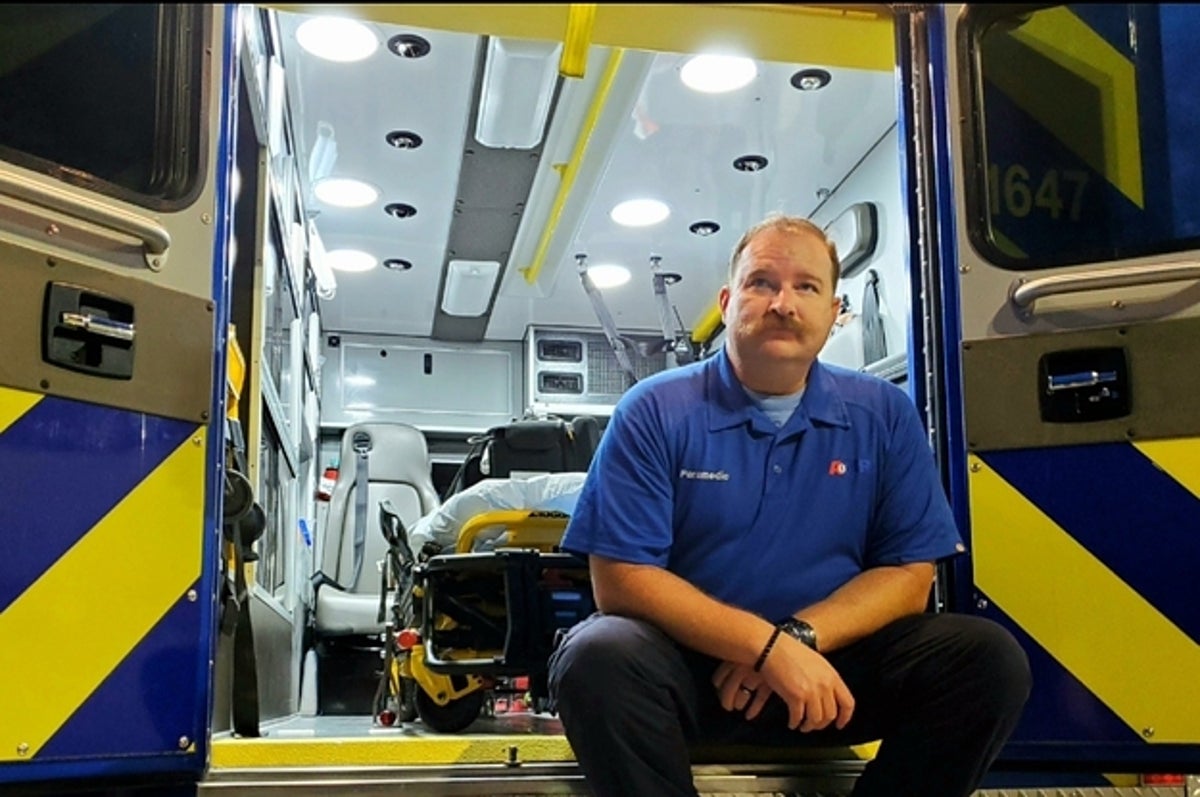 
The calls came fast, first with a cardiac arrest case, and next with multiple patients who were having trouble breathing, all suspected to have COVID. Usually Stew Eubanks, a paramedic in Sumter County, Florida, deals with lots of minor emergencies but now it’s mainly life-threatening cases. After a nonstop 24 hours, his Wednesday shift ended with another cardiac arrest.

Florida’s hospitals are filling up, with nearly 85% of inpatient hospital beds occupied, according to the Florida Hospital Association’s latest report. In the last week, the state has averaged more than 20,000 new COVID-19 cases a day, with nearly 15,000 people hospitalized. That’s shattered previous case records for the state, and COVID-19 deaths, which had been steadily declining since February, are also steeply rising.

By the end of his shift, Eubanks had transported 14 patients, a sharp increase from the six he’d see on a normal day prepandemic servicing the Villages, the largest retirement community in the country. Not only did he have more patients than normal, they were much sicker and required more critical care. Of the 13 hospitals in the local area, eight had limitations on which patients they would accept, including a standalone ER that warned it did not have enough oxygen to admit more COVID patients. Eubanks said even patients who manage to get admitted are waiting over 12 hours to receive care, and that hospitals no longer have the space to separate highly contagious COVID patients from other people requiring emergency medical attention.

“Everybody is on fire and nobody has any water,” Eubanks said.

Florida has emerged as the nightmare scenario for this summer’s surge in COVID-19 cases. The highly contagious Delta variant is spreading rapidly across the state, where less than half of the population is fully vaccinated. As school starts this week, pediatric COVID-19 cases are already on the rise, and with Gov. Ron DeSantis’s ban on mask mandates, that will likely continue. Pregnant women with COVID-19 are being hospitalized. And with nearly 68% of the state’s hospitals warning that they will face a critical staff shortage in the next week, healthcare workers in the state say they’re already overwhelmed and fear the worst is yet to come.

“Florida and Texas alone have accounted for nearly 40% of new hospitalizations across the country,” White House COVID-⁠19 Response Coordinator Jeff Zients said on Thursday. “In the past week Florida has had more COVID cases than all 30 states with the lowest case rates, combined.”

The latest surge in cases is taking a toll on Florida healthcare workers, who had borne the brunt of previous waves of outbreaks. “Our frontline healthcare heroes are finding themselves stretched thin and physical and mental exhaustion is taking its toll,” Florida Hospital Association CEO Mary Mayhew said.

“I see it in the faces of all the other people I work with,” Eubanks said, calling the high level of critical care required for Delta patients a huge mental and emotional drain for healthcare workers. “The incoming crew are supposedly fresh and ready to come in, and they’re beat down as they’re walking through the door already because they’re still not recovered.”

At the same time, a heavy load of non-COVID cases has also hit Florida hospitals. That reflects both delayed care for chronic illnesses like heart disease during the pandemic and higher rates of other respiratory illnesses like respiratory syncytial virus in both kids and adults, which typically spread in the fall and winter.

And elective procedures are once again being delayed to prioritize COVID patients. Sam Atallah, a colorectal surgeon from the Orlando area, usually performs at least 10 surgeries every Friday, predominantly on cancer patients. With hospitals on “code black,” nonessential surgeries can only go ahead with permission from hospital administrators.

“As you can imagine, most people having surgery must have some level of urgency,” Attalah told BuzzFeed News. “Yet 10–15 surgeries I was planning to do last Friday were essentially denied, and maybe rightly so because we don’t have the resources to manage things at this time. We don’t know how much more of this surge our hospital system can take.”

The Delta variant, now responsible for more than 80% of COVID-19 cases, is highly contagious. While with the original coronavirus, an infected person was expected to infect two to three others, a person infected with Delta is expected to infect anywhere from five to nine. That’s caused its rapid spread, with outbreaks sweeping across the many parts of the country with low vaccination rates. The strain has even been linked to outbreaks among the vaccinated, though the shots overwhelmingly protect people from severe illness, hospitalizations, and death. Across the entire US, 90% of all counties are now seeing high or substantial levels of transmission due to its spread, with Mississippi and Florida seeing the highest rates of positive test results reported by the CDC.

“We simply don’t have enough people vaccinated here [in Florida], that is what’s driving things,” epidemiologist Cindy Prins of the University of Florida said. “We also let our guard down, there was a turning away from masking statewide. Those are the two things you really need — to get vaccinated and wear a mask.”

Tourism, Florida’s mainstay industry, may have also played a role in Florida’s outbreak, said Emory University biostatistician Natalie Dean, by email. Tourists spreading infections could explain why Florida was hit earlier with the Delta variant than other US states and why it then turned up everywhere across the state.

Atallah said a pediatrician colleague on Tuesday had a 17-year-old patient test positive for COVID. The girl had visited Universal Studios the day prior with a group of her family and friends. “She spent all day in public, basically spreading COVID throughout the park, because she didn’t feel unwell enough to not go,” Attalah said.

And entire families are being impacted, with paramedics sometimes responding to calls to help multiple family members at once. “We’ve doubled and tripled up ambulances in front yards,” said Eubanks, recalling a time when he responded to a COVID-positive husband and wife, both struggling to breathe.

Still, Prins is more skeptical that tourists are playing a leading role in the state’s surge, noting that cases are turning up in rural counties far from amusement parks and beaches. “We have plenty of unvaccinated people who live right here to explain things,” she said.

Pandemic politics has also played an outsize role in Florida’s outbreak. DeSantis has repeatedly condemned COVID restrictions and mask mandates, instead blaming surging caseloads on media “hysteria” and migrants crossing the southern border. DeSantis forbade schools in Florida from requiring students to wear masks last month, despite those younger than 12 being ineligible for vaccines and widespread evidence that masks lower infection risks. This week he threatened to withhold salaries from local officials who ignored his order. The CDC recommends all schools require universal masking, kindergarten-age and older, regardless of vaccination status.

And the state has seen an increase in pediatric hospitalizations of COVID-19. While the vast majority of kids will experience mild symptoms — runny noses, coughs, congestion, and fevers — around 1% have ended up being hospitalized, according to data compiled to date from 23 states and New York City. But as case numbers continue to rise, and with schools in Florida opening this week, more children are expected to be hospitalized.

“Just over 6 weeks ago, we were averaging about 6 confirmed COVID-19 hospital admissions among children each day in Florida. Recently we have been averaging about 50 each day, a more than 8-fold increase,” University of South Florida epidemiologist Jason Salemi said. In that time, the state went from 8.5% of all new confirmed COVID-19 pediatric hospitalizations in the country to about 22% of the national total.

The rate of COVID-19 cases in children under 12 is now higher than adults over 60 in Florida, and the rate among teens is 18% above the state’s total average.

Deaths, which are typically reported weeks after hospitalizations, have also surged in Florida in the last 14 days. “We do know how to treat COVID-19 better,” said Prins, who hopes that the spiking case numbers will not lead to as many deaths as previous waves.

On a recent shift in the labor and delivery ward at Osceola Regional Medical Center in Kissimmee, Florida, just south of Orlando, nurse Marissa Lee was caring for four expectant mothers who had COVID-19.

One, who was critically ill, had an emergency C-section performed while she was intubated. “She didn’t know we took the baby out,” said Lee, who was on her way to cover her second overtime shift in a row when she spoke to BuzzFeed News.

A 30-year-old hotel manager, Kristen McMullen, from West Melbourne, Florida died on August 6, just two weeks after giving birth via an emergency C-section. McMullen had contracted COVID-19 while pregnant and had to be put on a ventilator, dying of cardiac arrest as her family watched on FaceTime and her husband, Keith, sat beside her.

“She was an amazing person and she was strong,” her aunt, Melissa Syverson, told BuzzFeed News. Syverson did not want to disclose whether her niece was vaccinated or not, but called on people to be extra careful around anyone who is pregnant because they are more at risk of serious effects of COVID.

“There are a lot of people that think they’re strong and young and I’m going to be fine if I get COVID,” Syverson said. “And then something like this happens.”