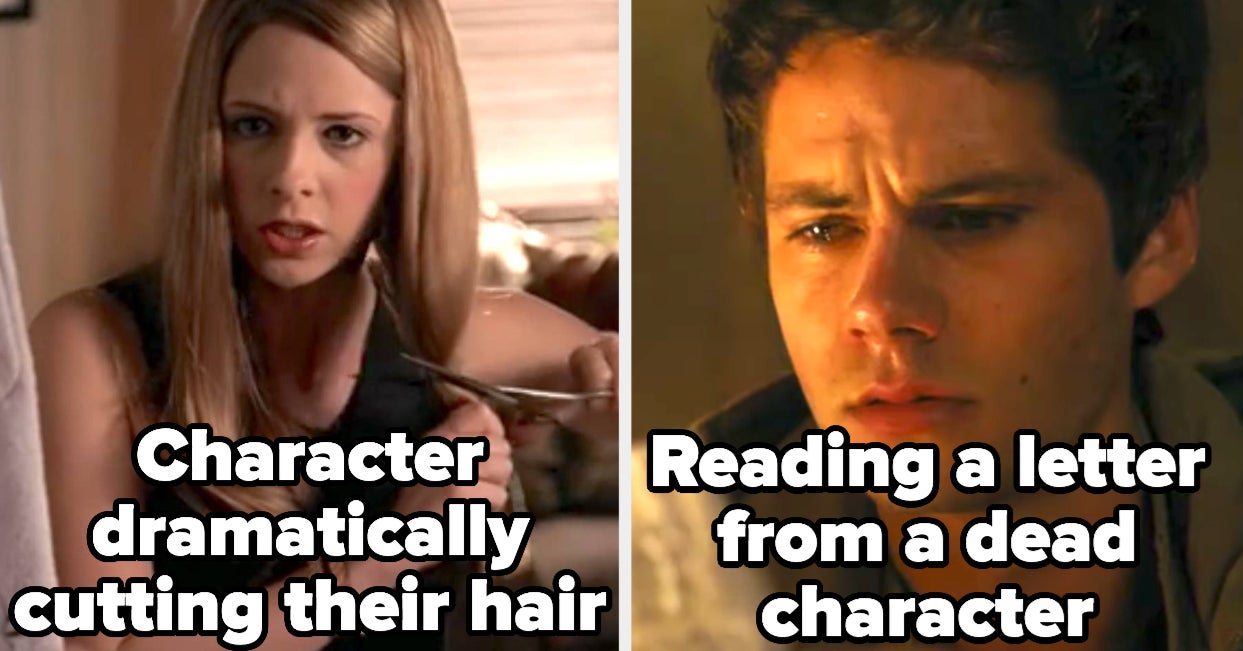 You ever notice there are things that seem to happen in *every* TV show and movie?

First up…a protagonist reading a heartbreaking letter from a character who’s died, usually in the last few minutes of the show/film (and usually with the actor of the dead character reading the words as a voiceover):

Or worse, a trying-on-thrift-store-fashion montage:

Just everything about dance-offs:

When one character is mortally wounded and dies in their love interest’s arms as they declare their love:

Whenever someone says, “They’re alive, but barely,” about a wounded character:

A character dramatically dyeing their hair to signal a character shift:

One character chasing after their love interest last minute to declare their love:

…Especially if it’s at an airport:

People ripping IVs out of their arms in the hospital:

Characters sliding down the wall and crying:

Female characters getting into bed or waking up with makeup and hair done:

Distressed characters cutting their long hair themselves to signify an emotional change:

Characters breaking a piggy bank to get the money out:

The characters stacking their heads over each other in a doorway:

People splashing water on their faces because of emotional distress:

Or, in a related trope, leaning down to use the sink or opening the medicine cabinet, only for a ghost to show up in the mirror:

Someone saying “knock knock” instead of actually knocking when entering a room:

Pregnancy tests being discarded faceup in the trash:

Teen characters grabbing one thing or refusing to even eat breakfast when there’s an entire display out:

Characters interrupting weddings while the priest is saying, “Speak now or forever hold your peace”:

Or the bride running off or standing up the groom at the altar:

People not saying bye when they hang up the phone:

Characters hanging out at coffee shops before school:

A character CLEARLY crying over the phone while the other person somehow doesn’t notice:

A character answering the phone at their former lover’s house, causing the current lover to suspect that they’re sleeping together:

And the final phone trope: a character leaving a message they didn’t mean to and then trying to delete it, especially if that message is confessing their love:

A character kissing another to wake them up:

And finally, a shy character coming out of their shell and revealing a previously unknown singing ability: