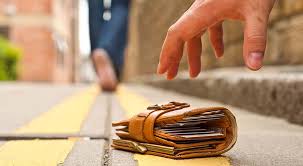 is it possible that lost money can still be found in such an age as ours? moreso one forgotten in a taxi? i never believed it could happen until a taxi money followed me to the bus station to say i had forgotten 8k in his cab. see my story below.

I went to the creeks last two weeks.was a nice time off the internet,and stress of paper work. had time out to swim, go boat riding in speed boats,go fishing and wild fruit hunting. was a nice time that comes once in a blue moon.

the most amazing part part that shocked the lilies out of me was on my way back from my short holiday.After the amazing ride in the speed boat to the taxi park,i had to  board a taxi to the bus station from where i’d get my self on the way home.  the ride was clean and smooth and the cabbie was an active “parliamentarian”  i was at the front and availed myself of the opportunity to charge my phone as my power bank had gone off. i had 8k in my pocket and was confident there was no fear. i didn’t bother putting it in my wallet to avoid having to be bringing it out each time i need to make payment.at the bus station i alighted and joined the stream of would-be passengers waiting for the  bus to take off. at a point my mind went to the money i had in my pocket, but i didn’t bother to check as it never looked like there would be any problems.

then after a while i looked ahead of me and my eyes locked contact with the cabbie. in my mind i was like what could he be looking for.he kept coming my way. a close look at him and i saw he had money in his hands.still i didn’t smell anything. then he stopped right in front of me. “excuse me please, are you not the passenger i just dropped about half an hour ago?” i told him i was, and showed him the phone i had been charging. satisfied that it was me, he said, ” please check your wallet”

that instant my senses clicked. i plunged my hand into my pocket and my 8k was no where to be found! the look of shock on my face  reminded me of those horror stories they used to frighten us in kindergaten. i was speechless. he then brought out the money in his hands. i told him my money was 8k and what he had in his hands was just 8k. i had tears in my eyes. could this be true in this 21st century? for taxi man to search for his passenger all the way to the bus station just to return forgotten cash(as much as 8k)?  so there are still people around with conscience? the normal thing was for the cabbie to thank his God for” buttered bread”. that man does not know how much blessing he had brought on his family and generations. The bible says, “..tell the righteous man,that it shall be well with him..”