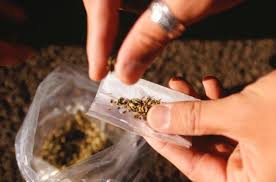 Marijuana is one of the most popular drugs among teenagers because most teens don’t consider it to be harmful. This idea that marijuana is harmless is a very common misconception among teens. Teens use marijuana because it is a great way to relax and just chill out with friends, but most teens aren’t aware of the risks associated with marijuana use. Teens may think that marijuana isn’t dangerous because it’s not a “hard” drug like cocaine or heroin, but what they don’t know is that marijuana has its own set of dangers.

Everyone has heard that marijuana is a “gateway drug” and this idea has been a point of debate for many years. However, even if marijuana does not lead to the use of other drugs, there are still negative consequences that result from the use of marijuana on its own. These include short term and long term consequences that include anxiety, drop in IQ, cancer, and asthma
Many started from childhood under peer influence, and like all other vices, addiction sets in.

Drug addicts abuse and are physically and mentally dependent on drugs or alcohol. Drug addicts continue to use drugs in spite of the negative consequences experienced by the drug addict and those around them. Overdose is frequent, as addicts continually use greater amounts of the drug, reaching dangerous levels. They cannot physically or psychologically function without their drug and when they are not using drugs, they face sometimes dramatic withdrawal symptoms.

drug abuse kills about 200,000 people worldwide each year, according to a new United Nations (UN) report. Global treatment for drug abuse would cost $250 billion per year if everyone who needed help received proper care, according to the UN.

Fewer than one in five people who need treatment actually receive it, according to the Associated Press. Crimes committed by people who need money to finance their drug habit, as well as loss of productivity, add tremendous costs for many countries, the report notes.

The UN estimates that about 230 million people, or 5 percent of the world’s population, used illegal drugs at least once in 2010. In the United States, female drug use was two-thirds the male rate, while in India and Indonesia, females constituted only one-tenth of those using illegal drugs.

our editor sent me a touching story of a fatal case of drug abuse friday. excerpts :
I saw a status of a friend on whatsapp,On Friday,lamenting and asking “death why? Why?? why???. Why my sister? Why would you do this? What were you looking for? What do you want again?..”

Later in the evening I got a call,followed by many others,to confirm that a final year student residing at Ifite,At the university premises of NAU has lost her life,not to sickness, or assassins, but to the least expected of all.. marijuana. According to Trusted sources, the girl was smoking “shack” at an undisclosed location in one of the hostels off-camp.She was said to be in the company of a security man,who was allegedly smoking with her in the same house,where reports said the generator was on and smoking. The smoke from the generator Was reported to have combined with the shack to choke the two “celebrants” By the time help came their way,the girl was gone for a long journey of no return.The door was alleged to have been tightly shut as at the time the two began to choke and and to be forced open to access the victims. there have been many speculations..but it it is logical to say that the smoke from the generator contributed to her death.

no single drug is usually present at a lethal dose. Rather it is the synergistic effects of combining the drugs that is lethal. And the majority of overdoses involve legal drugs. For example, a combination of opiates (heroin or prescription painkillers) and alcohol can be especially dangerous. Both suppress breathing, but by different mechanisms.

In the United States, prescription opiates are the cause for more deaths by overdose than any other single drug. Most of these deaths ultimately result from respiratory failure. A toxic opiate dose increases the inhibitory effect of GABA, which causes breathing to slow and eventually stop.
The girl’s sister graduated from the same university in flying colors. The girl herself,according to those who knew her,was the quiet type.But things began to change when she decided to relocate from the popular School Emalda Hostel to get an “off-camp” accommodation.While confirming the news to Our editor, A student ,who said her former space in the Emalda hostel was allocated to the deceased and that the dead girl made use of the space until she decided to go off-camp.” This is very weird ! I would never have believed this. Tricia ( real names withheld) never smoked,was very quiet..I just can’t explain this.” She lamented
Some critics however believe that there’s a twist to the whole story. A close friend of the deceased who preferred not to be named ,” I know This girl, right from her first year in this school to this final year. I suspect foul play.The security said they’ll investigate..but we all know the police we have here and their justice system..May her soul rest in piece..”
This is just one case out of many thousands.. This girl for goodness sake had endured from her first year to present final year, had dreams and goals,hopes and aspirations.. all lost,just yesterday. ( 3rd march)
What about her parents and relatives? All the hopes they’ve had,all the money wasted..feeding, comfort,schooling, from kindergarten to final year in university.. and suddenly it all got lost! In vain. The effects of substance abuse frequently extend beyond the nuclear family. Extended family members may experience feelings of abandonment, anxiety, fear, anger, concern, embarrassment, or guilt;  men in different cultures go into a wide scope investigation before tying the nuptial knot ,such incidences as this leaves a stain on the family name.no one wants to marry from a family of “drug addicts” even though it is just an individual that got involved.whispers will always be in the air, “..died while smoking shack..”
What then is this life? Just in a moment, a few minutes.. and it’s all over. more reasons for parents and guardians to get closer to their wards,more reasons why focus should be set on enlightenement.

may the soul of the deceased find rest..