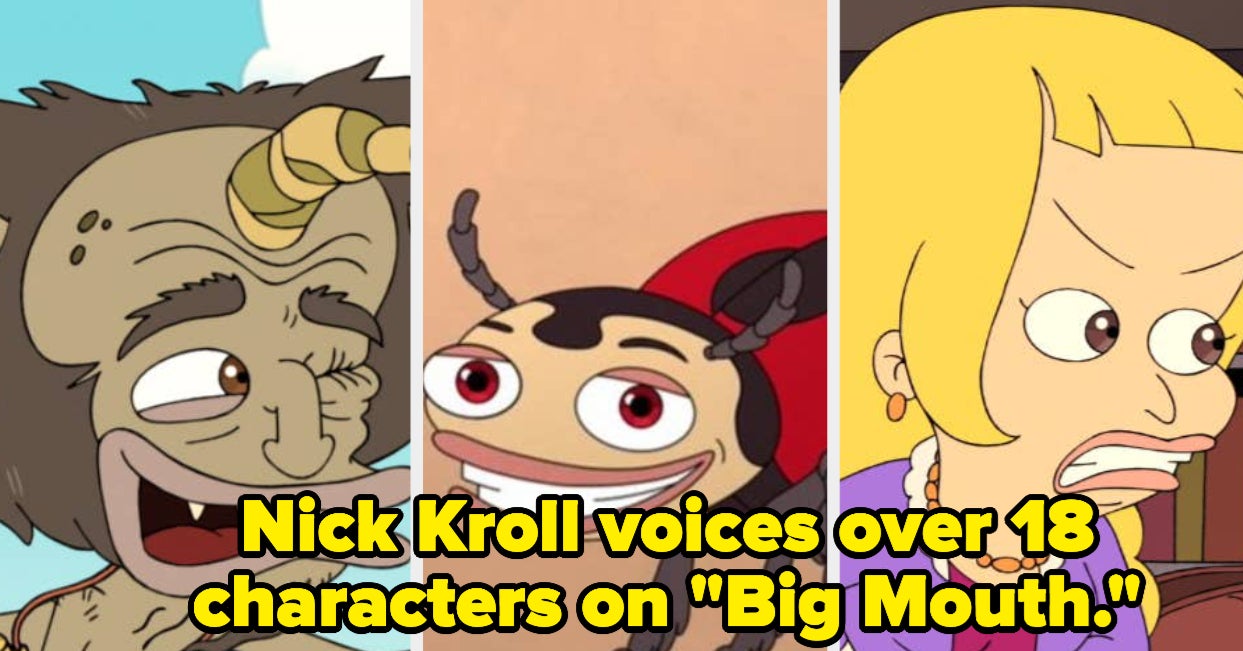 The characters Nick and Andrew are actually based on Nick Kroll and Andrew Goldberg’s lives.

In fact, a lot of the show’s awkward puberty stories are actually from the writers’ and their friends’ personal experiences.

Shows and movies like Freaks and Geeks, The Wonder Years, and Superbad all majorly influenced what Big Mouth would be like.

Throughout all four seasons of Big Mouth, Nick Kroll has voiced over 18 different characters.

When co-creators Andrew Goldberg, Jennifer Flackett, and Mark Levin first told Nick Kroll about their idea for a hormone monster, Nick’s immediate reaction was to respond in the voice that he now uses to voice Maury the Hormone Monster.

Nick’s voice is the most similar to Nick Kroll’s actual voice because he wanted the character to feel as natural as he could be.

Coach Steve is partly based on one of Nick’s other characters — Ref Jeff from The Kroll Show.

Nick felt that Rick the Hormone Monster’s voice had a grossness to it, but it was also a little bit groovy.

When recasting Missy, the creators saw dozens and dozens of potential Missys and even held auditions via Zoom.

When Ayo Edebiri was cast as Missy, Jenny Slate had already recorded all of Season 4. So, instead of having Ayo redo the entire season, the writers were able to find a moment in Episode 9 where the transition from Jenny to Ayo made the most sense.

Mark Rivers, who writes all the songs on Big Mouth, will first record the songs and do all the voices himself, then the actors are slowly added in later on.

Mark revealed that its sometimes very difficult to advance the story within a song — like the Valentine’s Day song in Season 2, Episode 1, each character sang from a different point of view and all of those stories had to carry through the rest of the episode.

The Season 2 song “I Love My Body” was originally meant to feel like an Andrew Lloyd Webber musical theater song, but after listening to it, Jennifer Flackett realized it worked so much better as a disco number.

Both Nick Kroll and Andrew Goldberg felt it’d be more appropriate for Missy and Jessi to be covered up during the “I Love My Body” scene, but Jennifer Flackett and Kelly Galuska argued that since all the male characters on the show had been naked, the females should be too.

The writers arranged Season 2, Episode 5, “The Planned Parenthood Show,” like “half after school special and half self-aware SNL spoof” so it wouldn’t feel forced, but viewers were still able to learn about the organization.

Big Mouth writer Gabe Liedman also worked on Pen15, and he was part of the reason that Pen15-Big Mouth crossover got to happen.

And finally, the writers actually have conversations around which inanimate objects are gendered and why tampons, specifically, are male.

Watch all four seasons of Big Mouth on Netflix now!