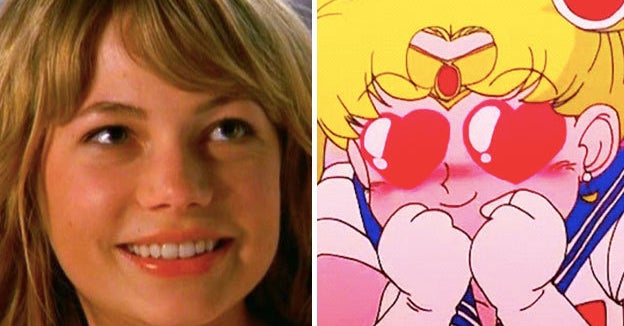 Jen Lindley, played by the magnificent Michelle Williams, was the best character on Dawson’s Creek. She had so much crap thrown at her (seriously, the writers did her dirty) but she was resilient and more powerful than any terrible storyline she was bogged down in.

She always stayed true to herself, even if other people didn’t quite get her.

Like, even when she became head cheerleader against her will, she didn’t compromise on who she was or what she stood for — and was totally iconic as a result.

She always voiced her opinion and fought for what she thought was right.

She called out sexist bullshit over and over again:

She consistently and respectfully expressed her boundaries.

And she did it all with a keen sense of humor.

Despite being slut-shamed both implicitly and explicitly throughout the course of the show, she was very sex positive.

She was smart and quick-thinking in every situation.

She refused to give in to petty girl-against-girl fights, and always worked hard to be a good friend to Joey, despite Joey not entirely deserving it a lot of the time.

She also wasn’t afraid to call out Dawson on his ridiculousness.

She was always unafraid to express her feelings.

And she devoted herself to the people she cared about.

She put the work in to improve her relationship with Grams, and it was beautiful.

And she formed her own family with Jack, creating the actual most interesting soulmate bond on the show.

In general, she was excellent at giving advice to everyone.

She was a literal shoulder to cry on for the whole gang.

And even in her dying moments, she was a good friend, a great listener, and funny as hell.