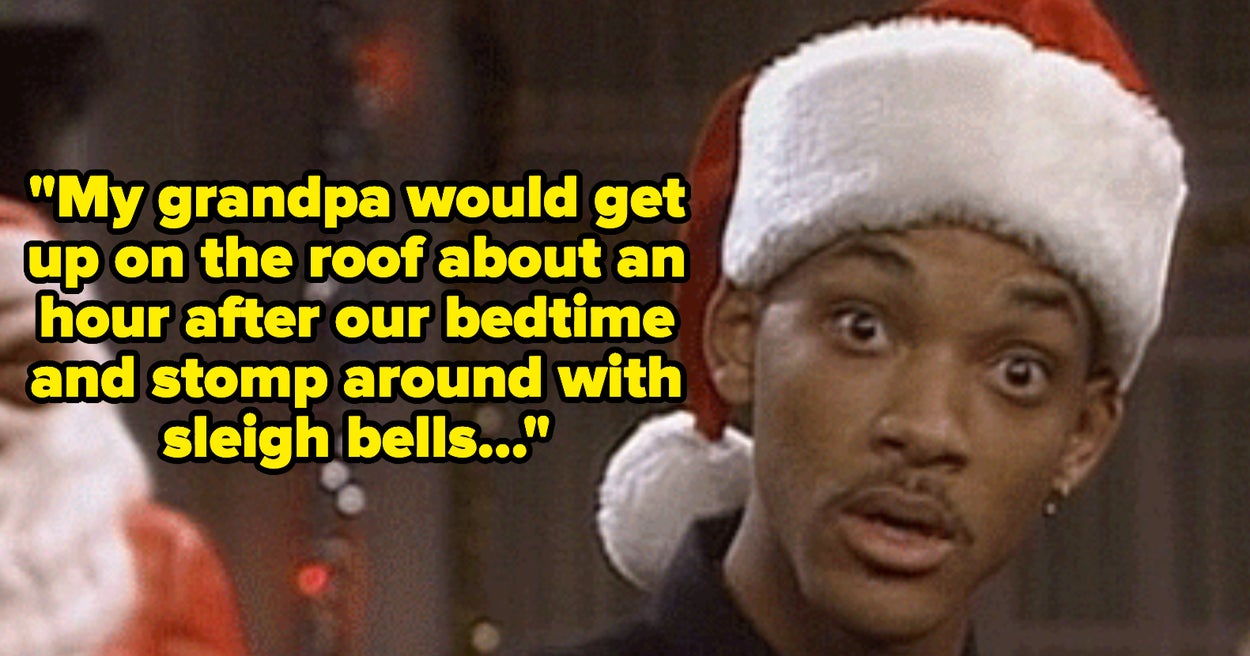 Listen, while some holiday traditions are pretty standard, every single family has at least ONE weird tradition that it feels like only they do during the holidays.

And this week, we really saw how ~funky~ some families can get when redditor u/hellotintin100 asked, “What are some interesting or fun Christmas traditions you follow?”

So, with that in mind, here are just a few of the weirdest, silliest, most interesting family holiday traditions shared:

“Every year, my wife and I buy an ornament for our tree that corresponds with something that happened that year, so we have a tree filled with all of these weird, wacky ornaments. We have a tennis ball (we started playing tennis that year), the Swedish Chef (our Europe trip), Ship Captain Nutcracker (our first cruise), amongst many others. It’s such a fun tradition in December to debate what we should get for that year, then finding something and reliving them all when we put them up.”

“My grandpa would always get up on the roof about an hour after our bedtime and stomp around with sleigh bells.”

“My family has a tradition of leaving riddles on the cards and guessing what the gift is before opening. We go around, one by one, reading our hint out loud so everyone can guess, then we open it and show the room. It ends up taking like five hours for everyone to get through their gifts, but it’s always a fun time.”

“Every Christmas, the kids in the house have wrapping paper put over the entrances to their rooms so they get to rip through it in the morning! It originally started as a way to keep a ~certain kid~ in his room when he kept coming out early and opening presents before everyone was awake.”

“Twenty-eight years ago, I was one of the first 100 customers at an HEB grand opening. For that honor, I got two cans of this potted meat. That Christmas, we had a fun Dollar Store White Elephant exchange with the family on Christmas Eve. I wrapped one of the cans of potted meat as my contribution…”

“My wife and I order from the same Chinese restaurant every Christmas Eve. We eat there almost exclusively on Christmas Eve, and we don’t eat much other Chinese food through the year. It started one Christmas Eve when we were both feeling lazy and hasn’t stopped. It’s been 12+ years now.”

“My brother and I stay at our mother’s house on Christmas Eve with our families every year. We still sit at the top of the stairs on Christmas morning until our mother tells us we can come down to the living room to see what ‘Santa’ left us all. We’re both in our thirties, and our wives and kids now sit on the stairs as well. It’s getting pretty crowded up there, but I wouldn’t have it any other way!”

“Each year, we cut a round off of the bottom of our Christmas tree. We label it with the year. Over time, it’s made for a sweet display/reminder of years past.”

“Every year, my family buys each member a gag/joke/small gift, then writes a poem about it for the recipient to read upon opening on Christmas Eve. It’s the highlight of the entire season for me, as it’s always filled with laughter at how terrible we all are at poetry. No matter how old we all get, this is a really fun way to bring everyone back to that root joy of spending time together (this year it will be virtual, but still fun).”

“We play ‘Shaker Present.’ You get to shake one present and ask ‘yes’ or ‘no’ questions. If you figure out what it is before Christmas, you get to open it early.”

“Every year for the last eight years, my sister and I gift each other one weird thing that makes the other one laugh. It started when our house almost got repossessed just before Christmas, and everything was so terrible that we just wanted to make each other laugh…”

“…Highlights of this tradition include: 12 packs of frozen potato smiley faces to resolve a long-forgotten childhood argument, three chocolate tubes filled with tiny rubber ducks instead of chocolate, a lucky dip (which involved hiding small gifts in socks), and, this year, a bag of potatoes with Nicholas Cage’s face blue-tacked on every individual potato.”

“As soon as this pandemic is over and we can once again have in-person Christmas gatherings, my sister and I will get back to our yearly tradition of smacking the hell out of each other with cardboard wrapping paper tubes. We’re in our 50’s, BTW…”

“A tradition we had when I was a child — and one I’ll be continuing with my children when I have them — is the ‘Christmas Eve Box.’ For Christmas Eve, we were given one gift early, and it was always a box with filled with new Christmas pajamas, a mug, hot chocolate mix, popcorn, and a Christmas movie. We would get to open it around lunchtime, and we’d spend the rest of the evening in our new jammies drinking the cocoa and watching the movies together.”

“My parents were broke when I was a kid, but you’d never know it from Christmas. One Christmas Eve, we were particularly broke. My mom had been with us all day and — since there was no money — she hadn’t gone food shopping. All we had were some cheap hot dogs and canned beans…”

My sister and I loved it so much, we did it again the following Christmas Eve.

Eventually, we weren’t quite so poor. The two-dollar AnP hot dogs became Nathan’s, then Sabrett’s, then fancy bratwursts from a butcher. The beans went from BnM to fancy gourmet stuff. My sister and I are now adults with our own families, but — even on years when we’re not together — our entire family still has hot dogs and beans on Christmas Eve.”

“Every Christmas, I always changed my mother-in-law’s ‘Noel’ candles to read ‘El No’ instead. She would always ask me if I was the one that changed it, and I’d respond, ‘El No!’ She found me amusing, and I miss her.”

“Maybe a week before Christmas, we would go out into the front yard with my dad to find the ‘perfect’ pine cone. We planted the pine cone in a pot and watered it. Then, overnight, it would become this magnificent, huge (to my young eyes), fully decorated Christmas tree. We were told this planting thing only worked in December, and that it was ‘Christmas magic.’ My sister and I eventually figured it out when we found pine needles in my parents’ car.”

“My wife and my Christmas Eve tradition is a buffet for ten…for two. We spend the days leading up to Christmas Eve going around and buying a selection of the poshest ‘party food’ from the likes of M & S, Booths, Waitrose, etc…”

“On Christmas Eve, we bathe the kids (a 10-year-old and a 5-year-old). We play board games and watch movies with them, then it’s bed at 9 p.m. for them both.

That’s when the oven goes on.

30-40 minutes later, we have enough food to feed at least ten people, but it’s just for the two of us. We’re usually stuffed by around 11:30 p.m., but a few glasses of wine keeps the merriment going! We arrange the gifts at around 1 a.m., then it’s off to bed. Excited ourselves, we usually end up discussing what food was our favorite and my wife makes a note to buy it again the following year.

Apart from seeing the kids’ faces on Christmas morning, that is by far my favorite part of Christmas.”

“Santa (my grandpa) would call us on the phone every year and ring bells in the background, saying it was the reindeer! I still remember being totally awestruck that I got to talk to Santa on the phone!”

All right, you’ve had your laughs…now it’s your turn!!! Can you top these? What’s your family’s silliest, weirdest, most interesting holiday tradition? Share in the comments below! Oh, and happy holidays to you and yours!