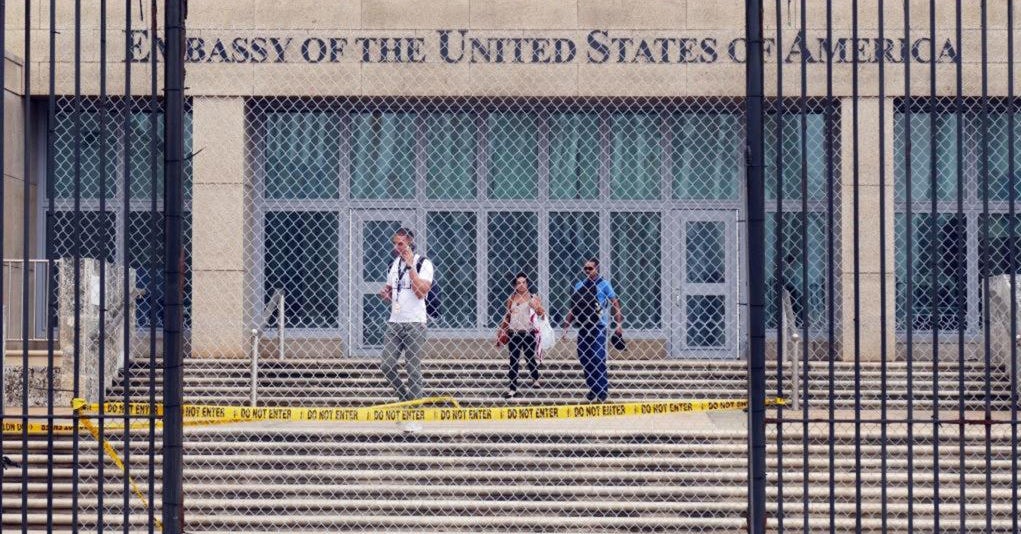 A microwave attack is the “most plausible” explanation for an outbreak of mysterious injuries reported by dozens of US diplomats in Cuba three years ago, a long-awaited study released over the weekend concluded.

But scientists who collaborated on the National Academies of Science report, commissioned by the US State Department, say that the finding about possible microwave attacks is far from conclusive. Outside experts on microwaves and the mysterious “Havana Syndrome,” meanwhile, dismissed the conclusion as implausible. One scientist dubbed it “science fiction.”

“In many ways, what we are saying is the US government needs to take this on in a more deliberate and comprehensive manner,” said panel chair David Relman, an infectious disease expert at Stanford. “What is needed is an all-of-government effort to not just study what happened, but to anticipate what the future holds.”

The State Department praised the release of the report, saying it “can add to the data and analyses that may help us come to an eventual conclusion as to what transpired,” in a statement sent to BuzzFeed News. “Among a number of conclusions, the report notes that the ‘constellation of signs and symptoms’ is consistent with the effects of pulsed radiofrequency energy. We would note that ‘consistent with’ is a term of art in medicine and science that allows plausibility but does not assign cause.”

Roughly 35 diplomats reported the mysterious injuries starting in late 2016, marring US diplomatic relations with Cuba for much of the Trump Administration.

In 2017, the State Department first publicized concerns about US Embassy personnel in Havana who had reported hearing loud noises and then experiencing symptoms including ear pain, headaches, and head pressure. Early news reports cited sonic weapons as the cause, triggering deafness, inner ear damage, and a concussion-like syndrome of brain damage — all dismissed by the new NAS report — which then-State Department head Rex Tillerson called “health attacks” on the diplomats and their families.

Other theories circulated suggesting that the mysterious illnesses were caused by cricket noises triggering mass hysteria or Russian spies somehow zapping diplomats. In 2019, the State Department asked the NAS to review the illnesses with the limited information available and with an emphasis on advising how to collect medical information for any future clusters of cases. The panel met three times in the last year, hearing from medical teams who had treated or examined some affected patients. They also reviewed reports by the CDC and the NIH and heard testimony from eight patients in closed sessions.

But the panel was hamstrung by a lack of information about the people involved, the report said, because of security and medical privacy laws. The medical testing data provided was not thorough enough, since it was collected to help treat the patients rather than to investigate an outbreak of injuries.

“We didn’t have information about individual people, including who was first affected, who was later affected, what their connections were,” said panel member Jeffrey Staab, a professor of psychiatry at the Mayo Clinic. Given those limits, the panel focused on the acute, immediate symptoms reported among the diplomats in Havana — loud sounds, pressure, vibrations, ear pain, and headaches — as most distinctive and informative about the possible explanations. The report also excluded recent reports of similar injuries in Canadian tourists and US diplomats in China.

Those same limits constrained what the scientists could say were plausible explanations for the injuries, panel members told BuzzFeed News. A theory that the mysterious illness was caused by an infectious disease such as the Zika virus was deemed “highly unlikely,” and a more recent explanation that the outbreak was caused by pesticide poisoning was determined to be “not likely,” though the scientists pointed out that no blood samples remained from the patients to thoroughly rule it out.

“Even if we had all the security clearances to see everything about everyone there would be holes in the information.”

The scientists also considered a third theory that mass psychological illness was the cause. In this scenario, a cluster of acute symptoms is followed by wider numbers of chronic conditions — notably persistent dizziness, difficulty thinking, insomnia, and headaches — mirroring past outbreaks of injuries spread by social contagion. However, without data on the individuals and their contacts to map out social networks, said Staab, the panel couldn’t draw a definite conclusion. “The hardest to set aside is the psychological, social explanation,” Relman said.

That left a final theory that the illnesses were caused by a “directed radio frequency (RF) energy attack.” Based on a real phenomenon called the Frey effect, where beams of pulsed microwaves aimed at a person’s ears could produce clicking noises only the person targeted can hear, the panel suggested a “Frey-like effect” was the “most plausible” of the explanations considered.

“It’s a little dramatic. But first of all something important and real happened to these people,” said Relman. “We looked at possible mechanisms and found that one was more plausible than the others and entirely consistent with some of the most distinct clinical findings.”

The report concluded that a microwave attack could cause a compensatory balance and dizziness syndrome afterward, accompanied by depression triggered by their injuries. Chronic injuries often have psychological aspects that shouldn’t be discounted as real symptoms, Staub said.

Some of the most important findings from the report were its recommendations to the State Department on how to investigate any future clusters thoroughly, with experts from many disciplines instead of just physicians familiar with brain injuries. “Whatever happens, we can’t let this happen again,” Staab said.

However, experts in both microwaves and group psychology were highly critical of the report’s conclusions.

“The report does not make a coherent argument why microwaves should be involved,” said University of Pennsylvania bioengineer Kenneth Foster, who first described the mechanism behind the Frey effect in 1974. The effect requires very high power levels to produce barely audible sounds, he said, and it’s not known to cause injuries. “Maybe someone went to the trouble to truck in a large microwave transmitter to cause the employees to hear ‘clicks,’ but there are simpler ways to harass people than that,” he said.

“This is not science but science fiction,” said UCLA neurologist Robert Baloh, coauthor of Havana Syndrome: Mass Psychogenic Illness and the Real Story Behind the Embassy Mystery and Hysteria. News accounts alone, not considered by the panel, paint a picture of illnesses spreading through the patients in ways that look a lot like past group psychology outbreaks, Baloh said. “There’s a lot of misunderstanding these symptoms are real, people are really injured, even among physicians,” he added.

“This is not science, but science fiction.”

Neuroscientist Mitchell Joseph Valdés Sosa of the Cuba Neuroscience Center said the report was a step in the right direction since it invalidated the wilder theories of sonic weapons and brain damage. The findings resemble a 2018 Cuban Academy of Science report, coauthored by Sosa, that suggested that early injuries among a few people likely spread by mass psychology to more people throughout the wider diplomatic community. “We don’t agree with the radiofrequency pulse finding of course,” Sosa said. “But this is the first time we have US experts acknowledging psychogenic effects could be important.”

He noted the Cuban hotels and neighborhoods where the microwave attacks supposedly took place are in crowded, open spaces, making it unlikely such a small group would be affected or that the attacks could go unnoticed.

The Cuban Academy of Science did reach out to the panel to present its surveys of the neighborhoods near where the injuries were reported, Sosa added. But they were told the panel’s contract didn’t allow for consulting with the Cubans.

None of the panel members seem to have much experience in biological effects of microwaves, which might explain their willingness to consider a Frey-like effect plausible, said Old Dominion University bioengineer Andrei Pakhomov, who said he was skeptical based on his four decades of research in the area. “There are many reports of biological effects from radiofrequency fields. But there are no reliable ones.”

Despite the reported suspicions of Russian spies somehow building off Soviet-era research to create such a weapon, Pakhomov, a Russian emigre, said the field is now defunct in Russia.

“I know all the people there who could have done something in this area,” he said. “They are all retired or out of science.”